Kino // Unrated // March 10, 2020
List Price: $24.95
Review by Stuart Galbraith IV | posted March 5, 2020 | E-mail the Author
Uncomfortably straddling harsher Western elements with Disney-esque family comedy, The Rare Breed (1966) still manages to be pretty entertaining, despite its herky-jerky narrative. James Stewart, pushing 60 and looking older, saddled with a terrible hairpiece (that looks like a saddle itself), had moved away from the psychological Westerns he'd made with director Anthony Mann in the 1950s, yet was hanging in for most of the ‘60s with a mix of innocuous comedies like Mr. Hobbs Takes a Vacation (1962) and Dear Brigitte (1965) but also with the occasional darker, more dramatic film, including The Flight of the Phoenix (1965) and Bandolero! (1968).

No doubt that Disney's The Parent Trap (1961) was an influence, with that comedy starring Maureen O'Hara and Brian Keith, both of whom appear in The Rare Breed, alongside Juliet Mills, whose sister Hayley was the de facto star of Parent Trap. The Rare Breed was the last production of actor-turned-producer William Alland, best known for his sci-fi films at Universal in the 1950s. 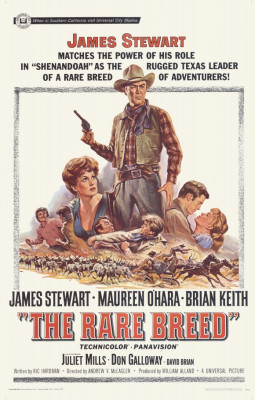 English lady Martha Price (O'Hara) and her daughter, Hilary (Mills), Martha's husband having died en route, have brought their prized Hereford bull, Vindicator, Out West for breeding purposes but at auction the seasoned cowboys scoff at the hornless bull, which Hilary leads around like a trained pooch.

Meat packer Charles Ellsworth (David Brian) buys Vindicator on behalf of Texas rancher Alexander Bowen, mainly to seduce Martha back in his hotel room when later she arrives to pick up his payment. Appalled by his brusque advances, she decides that she and Hilary will escort Vindicator to the ranch themselves, no matter that wrangler Sam Burnett (Stewart) has already been assigned that unwanted task. He believes trying to breed longhorn cows with the English bull is a waste of time.

The oddly-structured film devotes the first half of the story to the journey there, with Deke Simons (Jack Elam), working for competing rancher John Taylor (Alan Caillou), having made a deal with Burnett to steal the bull, though Burnett backs out when Simons turns out to be far more ruthless, triggering a stampede that nearly kills Martha and Hilary. (The stunt of their wagon overturning in the melee went wrong, the two women doubling them narrowly escaping serious injury.) Elam, for his part, is very good in one of his last straight villain parts.

Later, arriving at the fort-like ranch, Scotsman Bowen lives like a caveman, unshaven in pitifully unclean, amidst chaotic surroundings that Martha immediately begins to set right. Hilary falls for Bowen's son, Jamie (Don Galloway), injured in the stampede, but few at the ranch, including Bowen, believe Vindicator can survive the harsh Texas winter, let alone successfully breed with the unruly longhorns. Burnett, on the outs with Martha after his dealings with Simons, works to earn back her trust by coming around to the notion that just maybe Herefords and longhorns could be crossbred after all.

In trying to be family friendly, The Rare Breed never quite reconciles its Western action-violence with its sometimes peculiar notions of comedy. Sticking out like a sore thumb is Brian Keith's outrageous Scot who, at first, looks like a refugee of Richard Fleischer's The Vikings. With shaggy mop of fiery red hair and disheveled beard to match, Keith affects an authentic if overemphatic burr throughout, drinks Scotch in the bathtub, and plays the inevitable bagpipes. (Much of Keith's dialogue appears looped in postproduction, presumably to fine-tune the authenticity of his accent.) His broad romancing of Martha, at one point comically taking his first bath in, presumably, many months if not years, is at odds with Stewart's intensity as Burnett, locking horns with Martha in the first half of the story, then trying to win back her trust in the second, devoting a big chunk of the winter and following spring and summer searching for a missing Vindicator and signs of any offspring.

But the film works much of the time, partly due to Juliet Mills's sweet-natured Hilary, who loves Vindicator but also understands the harsh realities of ranch life. The historically accurate premise is unusual and while the Disney influence is present, it doesn't cross the line into sticky sentimentality, and thankfully the movie avoids trying to humanize Vindicator. Martha's attachment is partly personal, but also like her mother she wants to fulfil her father's dream of introducing the breed into the American marketplace.

William Clothier's Panavision lensing is attractive, even though the production over-relies on soundstage exteriors (mostly notably the ranch). John Williams's score is pleasant, with a melody similar to his superior later music for The Reivers (1969).

Licensed from Universal, Kino's Blu-ray of The Rare Breed looks great, the Panavision frame looking sharp with strong color and good contrast, even (or maybe especially) on big projection screens. The DTS-HD Master Audio (mono) is also strong for what it is. Optional English subtitles are included on this region "A" encoded.

Supplements are limited to a trailer and a new audio commentary by film critic Simon Abrams which exhibits more thought and pre-recording research than most such tracks of late.

Not an essential Western but a pleasant one, good to watch with the family some rainy Sunday afternoon, The Rare Breed is Recommended.