The Criterion Collection // Unrated // February 25, 2020
List Price: $69.95 [Buy now and save at Amazon]
Review by Stuart Galbraith IV | posted March 21, 2020 | E-mail the Author
Czech filmmaker Karl Zeman (1910-1989) made movies like no other. Combining live-action with every form of special effect available, including stop-motion models and cutouts, his films approach the medium in a manner almost alien to audiences weaned solely on Hollywood films. More now than ever, Hollywood's big-studio, effects-heavy movies operate from a stylization of photo-realism, visual effects designed to recreate a kind of believable reality. It's not realism, as today's CGI-laden movies casually ignore basic laws of science in these recreations of reality: mass, gravity, sound effects in airless space, etc. But for most audiences, these movies look real.

Conversely, to a greater or lesser degree, Zeman's movies are emphatically unreal. They're droll and wryly amusing, but character and story are less important than an all-pervasive stylization, an all-encompassing look that facilitates a visually dazzling, sumptuous design, but since his characters tend to melt into the larger visual scheme, the actors must adapt their performances to Zeman's surroundings, rather than the other way-round. His movies also tend to be a little pokey, even glacial in their pacing. (His 1964 film A Jester's Tale is typically gorgeous, but agonizingly slow-moving).

Visually, however, Zeman's films dazzle again-and-again. They're non-stop parades of charming, inventive visual trickery, harking back to (and clearly influenced by) the early fantasies of French pioneer Georges Méliès, while often basing their overall look on the work of 19th century artists and engravers.

Criterion's new boxed set, Three Fantastic Journeys by Karl Zeman offers his best three (and most representative) films: Journey to the Beginning of Time (Cesta do pravěku, 1955), Invention for Destruction (aka The Fabulous World of Jules Verne/Vynález zkázy, 1958), and The Fabulous Baron Munchausen (Baron Prášil, 1961). Previously released to Blu-ray in other parts of the world, Criterion's set mostly repurposes supplements from those releases while packaging everything in a wonderful pop-up style folder/booklet consistent with Zeman's designs. 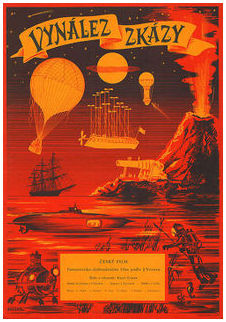 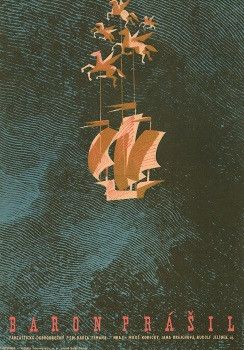 Journey to the Beginning of Time is the most conventional of the three, though still somewhat bizarre for the uninitiated. Four boys (Josef Lukáš, Petr Herrmann, Zdeněk Husták, and Vladimír Bejva) spend their school holiday embarking upon a journey back through time, passing through a mysterious cave and, via rowboat and on foot, move progressively backward in time, from the Cenozoic, through the Mesozoic and late Paleozoic eras, encountering various animal and plant life through each of these ages. No scientific or logical explanation for these lost worlds is offered; none is required.

However, great pains are taken to recreate the animal and plant life as accurately as 1950s paleontology would allow. The look was heavily influenced by the paintings of influential palaeoartist Zdeněk Burian, whose work became famous all over the world. The creatures, beginning with a Woolly mammoth and including Pteranodons, a Styracosaurus, a Brontosaurus, and, finally, a trilobite, are accurately named and their features described by the well-educated boys.

All this is achieved through three-dimensional stop-motion models as well as two-dimensional animated cut-outs, foreground miniatures, matte paintings, and full-size props. Compared to the stop-motion films (including those featuring dinosaurs) of animator Ray Harryhausen, Zeman's film integrates this material much more seamlessly. Where Harryhausen's movies tend to consist of set pieces showing off his animation, mostly confined to stop-motion models and "Dynamation" optically sandwiching the stop-motion and live-action footage into a single image, Zeman freely uses every trick at his disposal so that everything blends together more naturally. And where Harryhausen tended to feature his creatures front-and-center, in almost proscenium-like framing, Zeman is content to show his animals from camera angles comparable to the boys' perspective: the mammoth is seen from a distance, from the rowboat in the middle of the river, with the cautious mammoth partly obscured by all the brush.

Invention for Destruction, better remembered by its original U.S. release title, The Fabulous World of Jules Verne, exhibits the full flowering of Zeman's artistry. The story of a scientist and his assistant kidnapped by pirates trying to obtain the former's powerful weapon (essentially a nuclear bomb), virtually every inch of every frame is either a special effect or heavily stylized in some manner. The story roughly follows Verne's 1896 novel Facing the Flag with elements from Twenty Thousands Leagues Under the Sea in its second-half, but many other Verne novels and characters are referenced, with the entire film recreating the look of the Victorian line engravings featured in Verne's original print editions. Because these engravings were in black-and-white, suggesting shades of gray is achieved through the use of multiple black lines, called "hatching." In the movie, even the live-action sets and the actors' costumes utilize this myriad lining scheme. Special paint rollers were devised to add lines to all the sets and props of the live-action, studio footage.

Even more visual effects techniques are used here, much of it paying homage as much to Méliès as Verne. The delicate tone of the humor is distinctly Eastern European (later Czech filmmaker Jan Švankmajer's films are similarly droll). Partly it satirizes 19th century attitudes (most obviously when the hero is expected to perilously cling to a high wall while the heroine he's trying to rescue dresses), but it does so with undeniable affection, while trying to capture a real sense of wonder for man's technical innovations. In Hollywood adaptations of Verne, the quaintness is usually combined with a slight air of condescending superiority. Zeman acknowledges Verne's dated or inaccurate predictions, but always with affection and admiration. As writer Bill Warren described it, "sweet, detached irony."

The Fabulous Baron Munchausen reaches even deeper into Zeman's bag of tricks, with yet more elaborate effects. And where Journey was in color and Invention in black-and-white, Munchausen is in both color and black-and-white, with most of the film either tinted or in a stylized, selective color scheme suggestive of the earliest hand-painted silent color films of the early 1900s.

The film seems to have been an influence on Ray Harryhausen and/or writer Nigel Kneale; their 1964 film First Men "in" the Moon has a nearly identical opening: A present-day astronaut (Rudof Jelinek) leaves his spacecraft on the moon's surface only to be startled to discover footprints leading him to the 19th century rocket of Verne's From the Earth to the Moon. Beyond that, he finds that novel's Barbicain, Cyrano de Bergerac, and the famous Baron Munchausen (Miloš Kopecký) dining nearby. Believing the astronaut to be a moon-man, the Baron decides to whisk the spacesuited creature to Earth to learn more about life there. What follows are free adaptations of the Baron's famous adventures.

Even more visually dazzling than Invention for Destruction, Munchausen is also more pokey in terms of pacing and yet it's easy to see how director Terry Gilliam would have been so bowled-over watching it for the first time back in the 1980s and its obvious influence on his own Munchausen film adaptation. Further, there are moments in this picture that look exactly like Gilliam's animations for Monty Python, only made earlier.

Criterion's packaging is unusually attractive: each movie is presented (on a separate disc, in its own paper sleeve) in the form of a mini pop-up book, while the booklet recreates the engraving style of Invention for Destruction. All three movies are in their original 1.37:1 aspect ratios, derived from new 4K scans of the original camera negatives. (A duplicate positive of Journey was also utilized.) The mono audio sources the 35mm sound negatives. The English subtitles are excellent and unobtrusive, and the discs are region "A" encoded.

The extensive supplements are spread across the three discs. They include the U.S. release version of Journey to the Beginning of Time; an alternate English-dubbed soundtrack for Invention for Destruction, as well as the opening sequence from the American release version; new featurettes with animation filmmakers John Stevenson and Phil Tippett; four early Zeman shorts: A Christmas Dream (1945), A Horseshoe for Luck (1946), Inspiration (1949), and King Lavra (1950); Film Adventurer: Karel Zeman (2015), a documentary featuring Terry Gilliam and others; short featurettes produced by the Karl Zeman Museum; restoration demonstrations; and trailers. An excellent booklet essay by Michael Atkinson rounds out the extras.