Cranes are Flying, The

The Criterion Collection // Unrated // March 24, 2020
List Price: $39.95 [Buy now and save at Amazon]
Review by Stuart Galbraith IV | posted April 7, 2020 | E-mail the Author
The Soviet-made The Cranes Are Flying (журавли, 1957) is one of those great foreign films that seem to exist in a bubble. Director Mikhail Kalatozov is not a "name" director, though his later I Am Cuba (1964) was rediscovered years after it was made, and his last film, The Red Tent (1969), a Soviet-Italian co-production featured western stars like Sean Connery, Claudia Cardinale, and Peter Finch. Other great Soviet films preceded and followed it, but none like this one.

During the late-1950s, the only Soviet films shown in the west were Sergei Eisenstein's and a few others of the silent/early-talkie era; a few travelogues filmed in Kinopanorama (the Soviet's answer to Cinerama) were exhibited, and a jumble of Soviet-made fairy tales and science fiction movies were dubbed and reworked for release in America in theaters and on television. The Cranes Are Flying, on the other hand, was unlike anything American and European audiences had experienced up to this point.

The movie tells a simple story, about an ordinary young woman experiencing a succession of tragedies during World War II, mostly seen through her eyes. International audiences found beautiful Tatyana Samojlova, who resembled something like a cross between Audrey Hepburn and actress Diane Baker (same cat-like eyes), utterly mesmerizing. Visually, too, The Cranes Are Flying is striking throughout: the camera is constantly moving, and the movie has an almost dream-like expressionistic style that holds up very well all these decades later. 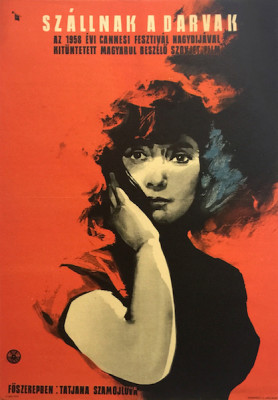 Veronika (Samojlova) and Boris (Aleksey Batalov), an artist, are young lovers eager to get married, but the war with Germany forestalls this when Boris enlists. Soon after, during an air raid, Veronika's apartment is destroyed and her parents are killed. She moves in with Boris's family: his doctor father, Fyodor (Vasili Merkuryev); his grandmother (Antonina Bogdanova); sister, Irina (Svetlana Kharitova); and nephew, Mark (Aleksandr Shvorin), a musician who obtains a deferment from conscription. At the front, Boris is fatally shot by enemy fire after saving the life of a friend, Stepan (Valentin Zubkov), but Veronika never receives any official confirmation of Boris's death.

Mark appears to rape Veronika during another air raid and, shamed, agrees to marry him, while the rest of the family believes she's betraying the MIA Boris. Fleeing the German offensive, the family evacuates to Siberia, where all save Mark go to work at a military hospital there.

Visually, The Cranes Are Flying is quite stunning. Impressively, director Kalatozov and cinematographer (shooting in standard 1.37:1 ratio and black-and-white) stick mainly to what Veronika (and, in the battle scene Boris) can see from their vantage point. Late in the film Veronika anxiously waits on a train platform, hoping to be reunited with the long-dead Boris. There are hundreds upon hundreds of extras in this scene, yet there's no master shot, no wide angle of this mass gathering. Instead, the camera follows her, in tight angles, navigating through the throngs of people, fluidly moving through this crush of humanity. When at the hospital Veronika and others can from the ward look outside through the window to see hundreds of soldiers arriving, far more than the small hospital can handle, yet the same technique is employed, limited their perspective.

A famous series of shots at the beginning shows Boris racing up the circular stairway in Veronika's apartment building, which is later superimposed with what Boris sees on the front lines after he's shot, turns and falls backwards, which is combined with the delirium of the dying Boris having visions of a happy wedding that will never be. When Veronika races back to the apartment building after it's bombed, the stairwell is virtually the only part of the building still extant, yet it's filmed in the same way. (This sequence must have impressed director George Roy Hill; in his 1972 film of Slaughterhouse Five there's a scene that virtually recreates it.)

Combined with its equally dazzlingly, fluid cutting, The Cranes Are Flying becomes dreamlike, as if recalling the high and low-points of the war a dozen years later, it alternately crystal-sharp and hazy, often at the same time. When Veronika rushes through a dark, snowy night, the tracking camera shows leafless branches and picket fences become a fast-moving, horizontal blur between her and the lens.

Essentially, the war is dramatized in microcosm through Veronika's character, who suffers great losses yet endures, channeling her grief acting as a nurse at the hospital where Fyodor works as its chief doctor, and through which her "betrayal" of Boris is eventually forgiven, while Mark's selfishness, after it is learned he obtained his deferments through a series of bribes, is ostracized by his appalled father. It's propaganda of a kind, but soft-peddled, subservient to the more personal, intimate story of Veronika.

Actress Samojlova mesmerizes. In her early 20s at the time, she projects both youthful innocence and inexperience yet over the course of the story seems to mature rapidly, as anyone would under such dire conditions. She's heartsick and miserable, yet soldiers on, because what else can she do but endure?

Criterion's new Blu-ray is a major upgrade from its early DVD release. The image has been remastered in 2K from the original camera negative by Mosfilm, with the sound from a 35mm soundtrack. Unlike many Soviet films from the 1950s and ‘60s and even well into the 1980s, The Cranes Are Flying looks just about perfect, with flawless sharpness and inky blacks throughout. (Mosfilm had previously undertaken a restoration way back in 1973, the credits helpfully inform us.) The subtitles are excellent and the disc is region "A" encoded.

Criterion's earlier DVD had almost no extras, so all the new material here is especially welcome. Included is a 20-minute visual essay by Ian Christie; a 12-minute archival interview with director Kalatozov from 1961; excerpts from a documentary about cinematographer Urusevsky; a brief video recollection by Claude Lelouch regarding his visit to the set of The Cranes Are Flying, and later his camera records the movie's triumphant win at the Cannes Film Festival; and a 2009 documentary by Patrick Cazals on director Kalatozov, running 74 minutes. Chris Fujiwara's booklet essay from the DVD release is also included.

Dazzling, The Cranes Are Flying is not to be missed, especially in this greatly upgraded form, with its flawless transfer and host of new extras. A DVD Talk Collectors Series title.