They Came from Beyond Space

Kino // Unrated // June 2, 2020
List Price: $24.95 [Buy now and save at Amazon]
Review by Stuart Galbraith IV | posted June 23, 2020 | E-mail the Author
Generally poor but undeniably entertaining, They Came from Beyond Space (1967) is a cheap sci-fi thriller whose screenplay, by co-producer Milton Subotsky, from Joseph Millard's 1941 novel The Gods Hate Kansas, cobbles together ideas done much better in earlier movies. Subotsky and Max Rosenberg's company, Amicus Productions, had apparently promised to deliver a sci-fi double-bill for distributor Embassy Pictures, only to blow their budget on the first one shot, the equally poor The Terrornauts, leaving director Freddie Francis to reuse props and set elements left over from other pictures.

They Came from Beyond Space starts out as a not-bad if blatant imitation "Quatermass" story, then borrows ideas from the 3-D classic It Came from Outer Space (1953) for its middle-third, then moves into loopy ‘30s-‘40s serial territory, all far beyond the limitations of its tiny budget. But even if They Came from Beyond Space had adequate funds of, say, several million, it still would have been derivative and mediocre. 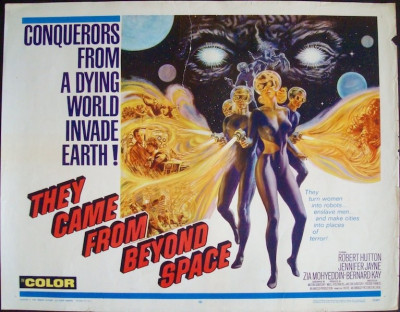 In Cornwall, meteorites forming a V-shaped patterned have fallen in the remote countryside. A group of nearby scientists are charged with investigating the strange phenomenon, but the obvious leader of the group, American Dr. Curtis Temple (Robert Hutton) isn't allowed to accompany his colleagues as he's still recovering from an automobile accident that necessitated major surgery, including having a silver plate inserted into his skull.

At the crash site, unseen aliens riding the fallen meteorites immediately possess the scientists' human form. They, in turn, take over the mind of a bank manager thus facilitating bank loans (one million pounds, no less) to build a top-secret base of some kind. They kidnap additional scientists at Temple's lab, but because of that steel plate in his head, are unable to take control of his mind. Elsewhere, local villagers are coming down with a fatal case of the "Crimson plague," or something like it, their blood-spattered, lifeless bodies spirited away by the extra-terrestrials. Temple, eventually working with Farge (Zia Mohyeddin), infiltrate the alien base long enough to rescue Temple's colleague Lee Mason (Jennifer Jayne), and launch another assault to determine the alien's intentions while rescuing the other kidnapped scientists.

Amicus was quickly becoming known for their Hammer-like horror films, especially a series of portmanteau anthologies that included Dr. Terror's House of Horrors (1965) and Tales from the Crypt (1972). However, they also had considerable success with feature films adapted from the popular Doctor Who television series - Dr. Who and the Daleks (1965) and Daleks' Invasion Earth 2150 A.D. (1966) - surprisingly effective and even spectacular films given their low budgets.

They Came from Beyond Space is more in keeping with science fiction cinema of the 1950s. The apparently-guided landing of the meteorites, their ability to possess human beings, the building of an elaborate, secret laboratory quickly and unnoticed, and controlling of the nearby villagers, is all straight out of Nigel Keale's Quatermass II. (Mild Spoilers) In the middle-third, Temple assumes the aliens are hostile while they insist he leave them be and that no one will be harmed, a promise Temple can't quite accept. This borrows heavily from the far superior It Came from Outer Space. (Major Spoilers) In the final third of the story, Temple, Mason, and Farge find themselves aboard a rocketship heading for the moon, where they're taken before the Master of the Moon (Michael Gough) himself, the moon-men dressed in flowing robes protected by musclemen in tights stripped to the waist. These scenes are like something out of Flash Gordon (1936), but even cheaper-looking than that classic serial. Other minor details add to the picture's pilfered quality: Temple, for no clear reason, drives an antique Bentley 4 1/2 Litre, the very same car driven by James Bond in Ian Fleming's early novels.

The production is frequently sloppy. In an early scene at the lab, one character is looking at his scientific "notes," but all too clearly they are script pages with the actors dialogue plainly visible. Later, aboard the Bentley, are process shots done so poorly one can see right through big "holes" on the car's hood, through to the passing scenery in the processed background.

Freddie Francis had been an acclaimed cinematographer, winning an Academy Award for Sons and Lovers (1960), but after shooting The Innocents (1961) with one exception he exclusively turned to directing, mostly horror and sci-fi, often for Hammer or Amicus. Francis returned to shooting other director's movies beginning with The Elephant Man and later many other acclaimed films, including The French Lieutenant's Woman, Dune, and Glory, winning another Academy Award for that film. Francis considered They Came from Beyond Space the worst film of his career, quite a statement from the director of Trog (1970), The Deadly Bees (1966), Son of Dracula (1973) and other arguably even worse films.

In its defense, They Came from Beyond Space is never dull; its increasing loopiness is part of its naïve charm. In trying to surmount the reduced budget, the filmmakers reused leftover props and set elements from Daleks' Invasion Earth 2150 A.D. and The Projected Man (another low-budget film), hoping to bring a little scientific credibility to the piece, but once pasty-faced, hammy Michael Gough turns up in his Republic serial-like flowing robe, all is lost.

Boasting a new 4K master, They Came from Beyond Space looks great on Blu-ray, the 1.66:1 widescreen image really sparkling. Contemporary reviews of the film zeroed in on the cinematography and color. Beyond clumsy mistakes in some of the process shots (noted above) I found the film attractively photographed for what it is. The DTS-HD Master Audio (mono) is adequate and supported by optional English subtitles. Region "A" encoded. Of special note is the covert art, derived from original ad art, and outrageously unlike anything found in this modest, generally unimaginative film.

Supplements include a trailer and a new audio commentary by film historian David Del Valle.

Not good, even terrible, but nonetheless entertaining and decently paced, They Came from Beyond Space is Recommended for genre fans. It has its fans: if the Internet Movie Database is to be believed, this was the favorite film of future Egyptian President Anwar Sadat.