Gerry Anderson has had a long, prolific and successful career in television, creating some of the most interesting children's programming of the 60's.  Anderson realized that you could create an exciting adventure show on a much smaller budget by using puppets.  The sets could be smaller, and much cheaper, but could still be very elaborate.  Using the knowledge that he gained working with marionettes on the series Four Feathers Fall (a children's western,) Anderson created 'Supermarionation,' a variety of puppet with very fine strings, remote controlled lips, and life-like details.  This new type of marionette first appeared in his 1960 series Supercar.

One of  the reasons for the show's success was that Anderson understood the limitations of marionettes.  It was hard to make them walk realistically, and they couldn't manipulate objects for example.  He overcame these obstacles by creative editing and close-ups of real hands flicking switches or operating tools.  The idea worked well, and Supercar led to other series, Fireball XL5, and the aquatic Stingray.  But it was his next series, 1964-66's Thunderbirds that would prove to be Anderson's biggest hit, inspiring a line of toys, comic books, and other merchandise.

Constantly improving his puppets, his next series would see even more lifelike details.  The popular Captain Scarlet and the Mysterons was followed by the not as successful Joe 90.  His last supermarionation series was 1969's The Secret Service.

Gerry Anderson then brought his unique vision to live action shows.  He created the cult classic UFO.  When UFO was not renewed for a second season due to the low ratings, Anderson decided not to scrap the entire idea, but adapted it into the 1975 show Space: 1999, which ran two seasons.  After this show's run ended, Anderson turned his talents away from television and entered the advertising field.

Anderson still thought of television, and was convinced that the current generation would be just as entranced with a fast action, futuristic, adventure show as the children of the 60's and 70's were.  That thought led to a new series, and a new style of puppetry, 1983's Terrahawks.  A&E has just released this entire series on DVD in nice boxed set. 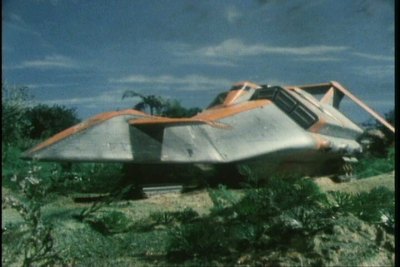 The year is 2020.  Android forces led by the villainous Zelda have attacked and captured a peaceful Earth research station set up on Mars.  Originating form the planet Guk, the androids were created to serve their human masters, but soon became more intelligent than their creators.  They revolted and exterminated all of the life on Guk.  Not content with that, they roam space looking for more humans to kill.  Finding the Earth, Zelda uses the Mars base as her launching point for attacks on our peaceful planet.

The only thing standing between Earth and total destruction are the Terrahawks, an elite fighting force created, and led, by the brilliant scientist, Tiger Ninestien.  The Terrahawks consist of several high tech fighting vehicles piloted by top notch officers.  The first line of defense is the Spacehawk, sitting in Earth orbit piloted by Lt. Hiro.  There is also the Hawkwing, manned by the first-class aviator and pop star diva Captain Kate Kestrel and Lt. Hawkeye.  This vehicle is based in an underwater hanger and every time it needed to launch,  a whirlpool is created so it can fly through the eye.   The Battlehawk, crewed by Ninestien and Dr. Mary Falconer, launches from an underground hanger that is disguised as a mansion.  The luxurious house opens up to allow the Battlehawk to fly through.  If that wasn't exciting enough, there is the Treehawk that is launched from, well, a tree.  Rounding out the lineup sis the Terrahawk, the flying command center that docks on the back of the Battlehawk.

Aiding these flying fighters are the zeroids, robotic ground troops in the shape of large metal balls.  They are commanded by Sergeant Major Zero, and each is identified by number.

Each episode of Terrahawks involves Zelda coming up with a new way to attack Earth, and it's up to Ninestien and his team to stop her.

The show has a lot in common with previous Gerry Anderson shows.  It was as if Anderson was trying to recreate his past successes by aping them.  Just like the Tracy's (the family that ran International Rescue in Thunderbirds,) the Terrahawk group has five flying vehicles with different abilities that launch from hidden bases, including a space based observational ship.  Captain Scarlet fought alien invaders from Mars every week, while the Terrahawks fight android invaders from Mars every week.  There are many more similarities. 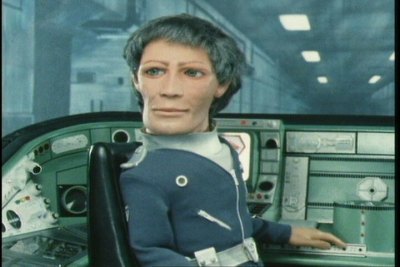 One difference, is that Terrahawks was not filmed in supermarionation as his other puppet shows were.  This time he used a new technique that was dubbed 'supermacromation.'  Always trying to improve his puppets look, Anderson decided that this time they would do away with the strings all together.  Instead of marionettes, they employed hand puppets with rubber faces.

This series just didn't  work for me.  While it did have the cool models and props that we've come to expect from Gerry Anderson productions, there are a lot of problems with it.  The first and most glaring is that the new puppets were much less effective than the previous marionettes.  The supermacromation puppets had oversized heads, and disproportionately small bodies. The proportions were all wrong with the hands being too big and the arms too long.  Another disadvantage is that their arms could not move, so most of the scenes involving the puppets had no movement aside from an occasional turn to the head.

The series doesn't take itself seriously either, which makes it hard for the viewer to suspend his disbelief.  With Kate breaking into song ever couple of episodes, and robots with French accents (not to mention robots getting drunk after drinking champaign!) it's hard to see this as anything but a children's show.  Thunderbirds had some humor in it, but there wasn't anything silly about it.  Terrahawks is very silly, which is not a good thing for a supposedly serious show.

The leader of Terrahawks, Tiger Ninestien (what a horrible name!) also has a mean streak.  I'm sure it was intended as being humorous, but he constantly makes fun of Hiro's oriental accent.  The first time I heard Tiger pronounce the "l" in a word as an "r," I thought I misheard it, or that it was an error.  But he does it through the whole series.  Whether wishing Hiro a "good fright" before he takes off, or exclaiming "Exactry!" he makes fun of his colleague in almost every episode.  Tiger's threats to dismantle Sergeant Major Zero come across as cruel also.  I just couldn't like the guy or get interested in the series.

Unfortunately, this set does not have a remastered 5.1 audio track like Thunderbirds and Captain Scarlet.  Even so, the audio was acceptable, but not a great presentation.  The stereo mix was not as dynamic as I would have liked.  The explosions sounded muffled, and the action sequences lacked punch.  The early synthesizer music that plays throughout the show sound rather tinny and thin.  But that was most probably how it sounded when it originally aired.  As I said, it's acceptable, but the mix on Thunderbirds has spoiled me.  There are no subtitles.

The video hasn't been restored either.  There is a fair amount of print damage, mainly dirt and specks, and the image is soft.  There is a good bit of grain present in the picture.  The sky and other large patches of color shimmer slightly due to encoding inaccuracies.  This was slightly annoying.    The full frame picture is very watchable, and it's not a horrible transfer, but not a great one either.

There are a few interesting extras included with this set, most of which are included on the last disc.

Photo Gallery narrated by Steven Begg:  This is a nine minute reel of behind the scenes pictures narrated by effects director Steven Begg.  This was my favorite of the bonus materials with this set.  You can see people with the model hawk ships and get an idea of how big they actually were.  An interesting extra.

Photo Gallery with Tony and Bob Bell:  Mainly recent photos of the director and associate producer with captions.  Not very interesting in my opinion.  There are photos of the pair standing in a parking lot with the caption: "Bob and Tony stand were the effects tank used to be."  Yawn.

There are commentaries included on two episodes.  Tony and Bob Bell contribute one on "Gunfight at Oaky's Corral" which is mainly them reminiscing about their time with the show.  Not terribly interesting, but worth listening to.  Steven Begg's commentary on "From Here to Infinity" was more technical, and much more interesting.

Though Terrahawks has the gadgets, puppets, adventure and science fiction background that made Gerry Anderson famous, it is missing that certain something that made his other series special.   Die-hard Anderson fans may want to pick it up, but if you are a more casual fan who enjoyed Thunderbirds and Captain Scarlet you should rent it first.