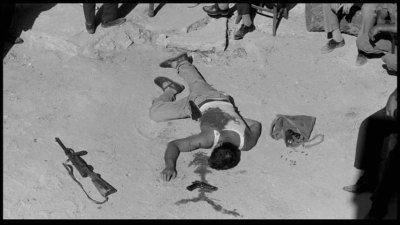 If you ask several people to describe a recent political event, the government shut down during the Clinton administration when a budget couldn't be passed for example, you will get different explanations of the incident from each person you question.  That is because all the diverse political viewpoints see the actions and repercussions in a different light.   This is true about the life of Sicilian outlaw Salvatore Giuliano.  Was this man a vicious murderer or freedom fighter?

The movie starts with the dead body of Salvatore Giuliano lying in an alley.  The coroner describes the position of the body and the contents of his pockets then lets the reporters in.  The officials describe a long gun battle with many shots being fired by Salvatore and his companion.  They won't say what happened to the other man, and the locals say they only heard three gunshots.  It is obvious that the government is not telling the whole truth, but why?

The movie then flashes back to Giuliano's early career, he was wanted for murdering a police officer at the age of 21, and went on to lead a faction fighting for Sicilian independence.  After their freedom was gained, Giuliano didn't stop fighting though.  He and his followers continued robbing and started kidnapping people and holding them for huge ransoms.  The violence reaches a pinnacle when his men recruit some local farmers into a crowd at a communist May Day celebration.

The movie continues to tell his story, both before his violent life and the events after his death in a series of flashbacks and flashforwards.   Some people say he was a murderous Mafia leader, others claim he was a hero of Sicily.  The movie shows his life and lets the viewer decide.

Usually movies about politics take one position, and while they will sometimes show a contrary opinion, they pretty much tell you what to think.  The films of Oliver Stone come to mind.  Francesco Rosi did the exact opposite with his film about the life and death of the Sicilian outlaw Salvatore Giuliano.  He purposely portrayed this man in a very objective light, and left it to the viewers to form their own opinions.

The movie is told in a neorealist style.  It is almost more of a documentary than a historical fiction.  It was filmed on location where the events took place.  The cast are all local villagers, with the exception of two professional actors who appear later in the film.  But the most interesting aspect is that there is no main character in the film.  Giuliano himself is only seen as a faceless man in a white coat while he's alive, and has no lines in the movie.  The film doesn't follow one person, or even a group of people.  You don't even learn the names of many of the characters.

Because of this style, Giuliano does not come across as a hero.  If you think about it, most movies about criminals glorify them.  From Bonnie and Clyde to The Sopranos most movie criminals have a certain appeal.  This movie avoids that trap by not dealing with Giuliano's personality at all, just his actions.  This makes the film more powerful and thought provoking.

I did have a problem with the film though.  For American audiences it will be fairly hard to follow unless you have a lot of knowledge about the politics in post war Italy.   There were many historical and political references that were not clear, since the filmmakers assumed that everyone would be familiar with them.  While that was certainly true with Italian audiences in the 60's, I found the lack of explanation, coupled with the nonlinear story telling very confusing.  I was never sure of the motivation for certain events and actions while viewing the film.  This was a fairly major flaw, since I wasn't able to accurately trace Giuliano's metamorphosis from a revolutionary to a criminal.  I know that some people considered him a hero, but since it wasn't clear whom he was fighting and why, the ambiguity of the film was lost on me.  The commentary cleared this up and explained much of the background story that I was missing.

Director Francesco Rosi did create a film that is magnificent to watch.  Shot in black and white, the way the shots are set up and framed makes this film look like a series of photographs.  The composition of the images is excellent, and adds another dimension to the film.  A very well done movie.

The audio is very good, but not outstanding.  It is slightly muffled, but this is probably due to the way the audio was originally recorded.  The Dolby digital mono audio track was in the original language, Italian.  There was a slight trace of hiss that is only noticeable if you turn the volume up quite high.  Under normal listening conditions it was imperceptible.

Criterion once again proves that it has no peer when it comes to releasing impeccable looking DVDs.  The picture is nothing less than astounding.  Presented with an anamorphically enhance 1.85:1 aspect ratio, the black and white image is beautiful.  There is excellent contrast and definition.  The lines are clear, the blacks are black, and details are easy to discern.  Digital artifacts are almost nonexistent.  When people ask if Criterion DVDs really have better image quality, point them to this disc.

Criterion often finds a good selection of extras to include with their DVDs, and this set is no exception.  The first disc has a commentary by film historian Peter Cowie.  Though Cowie's delivery is a little dry, his comments are very enlightening.  He explains many of the political, cultural, and historical references that I didn't understand when I viewed the movie for the first time.  This information makes it much easier to enjoy the film.

Disc two starts of with Witness to the Times, a 19-minute interview with Francesco Riso and writer Tulio Kezich (who was on the set and wrote a book about the production.)  This interview, done with the participants separately and then edited together, has the creators talking about the film's structure, the local actors and filming the May Day massacre.  It was an interesting look at the making of this unique film.

The 55 minute Italian documentary about Francesco Rosi's life, Il Cineasta e il Labirinto (The Filmmaker and the Labyrinth,) is also included in this set.  This program  was made with Rosi's full participation.  It starts with his young childhood, and examines his entire career.  There are interviews with directors Martin Scorsese and Giuseppe Tornatore (Cinema Paradiso) whose comments are very interesting. This program is a good introduction to the work of this director.  I didn't know much about him before I saw this, and found it very enlightening.

There is also an Italian Newsreel Except; a 3-minute section from a contemporary newsreel announcing the death of Salvatore Giuliano and giving the official version of events that is called into question in the movie.

Salvatore Giuliano is an important film, and a good choice for Criterion to release.  I found the film's political references confusing due to my lack of knowledge about post war Italy.  This information is central to the film, and my ignorance hampered my enjoyment of the movie.  The commentary did fill in the political background, and explained most of what I had questions about.

Watching this film is like looking at a carefully arranged set of photographs.  The images are very captivating, and Criterion's transfer of this movie is stunning.  The almost prefect video makes the movie's carefully arranged images even more wonderful.

This movie is highly recommended, with the caveat that it may be hard to understand some of the motivations and events without listening to the commentary.  Even without this knowledge, it is a very appealing film.