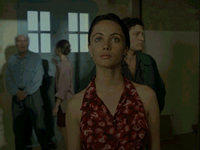 Winner of the Grand Prix at the 1991 Cannes Film Festival, Jacques Rivette's La Belle Noiseuse is about as good as any film about the creation of art can possibly get. Nearly four hours long, the film tells the story of Frenhofer - a once-famous artist - who hasn't painted anything worthwhile in ten years. He has aspirations to complete his latest work, "La Belle Noiseuse" ("The Beautiful Annoyance" or "The Beautiful Troublemaker"), which he thinks might just be his masterpiece, but has yet to find the right tools with which to do so. When an admiring artist and his girlfriend Marianne come to visit Frenhofer, he immediately regains his inspiration and persuades the reluctant Marianne to be his model.

For a film with very little in the way of action, La Belle Noiseuse is surprisingly suspenseful and tense. Rivette builds this tension by taking his time. His camera glides languidly in and around the scenery, showing as little as possible of each individual drawing and painting until it is near completion. Through Michel Piccoli's wonderful performance as the tortured Frenhofer (and Bernard Dufour's painting and drawing), we get to see exactly how each piece of art progresses from blank page (or canvas) to finished product. While the film has a penchant for intricate detail, these scenes in particular show a dedication to detail and trust in the audience that few filmmakers would have the courage to attempt. Shots simply of Frenhofer drawing go on for minutes at a time, without cutting, creating almost a time-lapse effect as the drawings come to life. 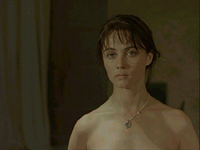 Scenes between Marianne and the famous painter alone in his studio make up probably more than half of the film, and although they often find themselves doing the same things again and again, these scenes never become boring or predictable. Their relationship progresses naturally because Rivette allows them the time needed to gain confidence and trust in each other. It is a testament to the performances of Piccoli and Emmanuelle Béart (8 Women) that what begins as a troubled, hostile relationship transitions seamlessly into a sincere collaboration that both characters need to see through until the end.

To put it plainly, La Belle Noiseuse is a masterpiece of filmmaking. The only real mistake that Rivette makes is putting even the slightest bit of emphasis on the few subplots that run throughout the film. While these threads do very little to actually harm the film, they only keep the audience from seeing more of what is the true heart and soul of La Belle Noiseuse - the interaction between Frenhofer and his model. This film is so incredibly good at showing the often-torturous hard work of creating art that I could have easily stayed in the studio with Béart and Piccoli for the entire duration. Their performances are truly as stunning and passionate as the film itself is accomplished. 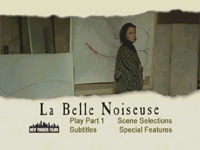 La Belle Noiseuse is presented in its original 1.33:1 full frame format, which benefits from having the film spaced out over two discs. This two-disc set divides the film at its original intermission point, a bit more than halfway through the film, with each half getting its very own disc. The image is mostly sharp and detailed with only minor edge enhancement throughout. Colors are a bit soft, however, and there is a bit of flicker present from time to time as well. Lighting and shadow are nicely delineated, while flesh tones are accurate and blacks are deep. A fair amount of grain appears occasionally, but the print is predominantly clean. The only other downfall to be found is a very noticeable layer change. Nonetheless, it was a wise decision on the part of New Yorker Video to spread the feature over two discs, as I fear that the image quality would have been highly compromised had they attempted to cram everything on one DVD. As it is, this is probably the best the film is ever going to look.

Sound:
The original French-language audio on this disc is presented in a Dolby 2.0 stereo format that doesn't fair quite as well as the video. Dialogue is always clear and crisp, but the rest of the track comes across as a bit muddled. Sound effects (including the intentional near-constant humming of crickets) merge with ambient noise, and there is no real separation across the front channels. What is presented as a stereo mix is really more of a mono track, which serves its purpose just fine for a film such as this.

Extras:
Included on this disc are a few nice extra features, all of which can be found on disc one. The interview with director Jacques Rivette is a little less than fifteen minutes long and includes optional English subtitles. He explains how the idea for the film actually started as a joke, from another of his films, until it eventually stuck in his head that he had to do it. Rivette details Bernard Dufour's work as the real painter on the film, and even talks about his 2-hour edit of the film, called La Belle Noiseuse: Divertimento, comprised of entirely different takes than the original version. We even get to see one scene from the alternate version as Rivette explains the differences.

Also included is an approximately 20-minute long interview with co-writers Pascal Bonitzer and Christine Laurent, which also includes optional English subtitles. They expand a bit on the influence of Balzac's novella, "The Unknown Masterpiece," on the film, and even talk briefly about working with Rivette on La Belle Noiseuse. They also explain why Rivette decided to shoot the film in a 1.33:1 format and how cinematographer William Lubtchansky had to make sure that the film would not be too badly mutilated when projected at the 1.66:1 aspect ratio in theaters. Not as interesting as Rivette's interview, this is still a nice companion piece to the film itself.

Rounding out the package, we have a few selected filmographies and a theatrical trailer.

Final Thoughts:
Jacques Rivette takes more chances and has more patience in his direction of La Belle Noiseuse than you'll find in any film in your local theaters for a very long time. He shows complete trust in the intelligence of his audience and never allows his characters to stop seeking the ultimate truth about art, for which they are desperately searching. It is this steadfast approach to his vision that makes Rivette's film so powerfully engaging.

Understanding the importance of the film's audio-visual quality, New Yorker Video made the right decision in spreading this lengthy film across two discs. Their inclusion, as well, of some interesting extra material is a welcome bonus to a film that would easily warrant a purchase even in a bare-bones release. It would have been great to have the two-hour version of the film included as well, but overall this is a very nice package for a tremendous film, and one that I highly recommend as a wonderful addition to any discerning cinemaphile's DVD collection.