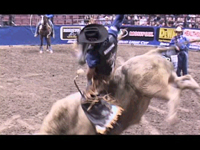 I think, sadly, that the time when young boys were overwhelmingly fascinated with cowboys has come to an end. It's hard for me to imagine, in today's day and age, that any youngster dreams of becoming a cowboy when he has all these video games and superheroes and various indoor activities to eat up his time. The lore of the legendary cowboy has, unfortunately, passed. I remember a time, however, when wanting to be a cowboy was just about the coolest thing you could ever want to be. Riding horses, roping cattle, and driving the range was all so macho. It was John Wayne. It was Cowboys and Indians. And it was the roughest men of them all: the Bull Riders.

As many times as I'd wished, as a kid, that I could move out West and get a couple horses, I never really thought much about it as I grew up. What was once a dream of my childhood soon became just another nostalgic memory. That said, I grew to know very little about the sport of Professional Bull Riding. In fact, I knew next to nothing about the sport until I saw Adrenaline Cowboys: Eight Seconds to Glory. For someone with barely any knowledge of the sport, I have to say that the film definitely succeeds in that it gives a good introduction to one of the toughest, and most lethal, sports in the world. Not only does it provide a nice primer for the uninitiated, but it also works to spark a fair amount of interest in bull riding. 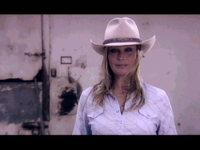 Hosted by Bo Derek, Adrenaline Cowboys follows rookie Mike Lee on his rise from the challenger circuit up to the PBR World Championship. While the film also takes a few others threads, by following other riders and stories, Lee's is the most interesting and exciting to watch. Only 18-years-old, the young rider seems like just about the nicest guy you're likely to meet on the ranch. That is, until he sits atop an enormous bull that wants nothing more than to get him off its back. You can see the focus and intensity of the sport right there in the eyes of one of its youngest competitors. Writer/Director Steven Dieveney wisely chooses to give Lee plenty of screen time and allows the youngster to show just how important confidence is in a sport like bull riding.

Although Lee is easily the best part of Adrenaline Cowboys, the other riders that Dieveney chooses to follow also provide a wide range of personalities that each personifies the life of the cowboy in their own way. We see as Tuff Hedeman basically smashes every bone in his face while riding on the baddest of the bulls - Bodacious. We watch as two-time PBR Champion Adriano Moraes and the hard-luck Mike White try to overcome injuries on the PBR Cup Tour. And Dieveney shows the reverence and appreciation of fellow riders, and fans alike, as Ty "The King of Cowboys" Murray - who is coincidentally the boyfriend of singer Jewel - decides it's finally time to hang up the spurs. Dieveney shows not only the events that these cowboys participate in, but also provides a glimpse into their home lives. He allows the viewer to learn a little more about these men, thereby only ratcheting up the tension as they risk their lives and mount the huge bulls. 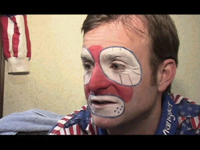 There are certainly moments in Adrenaline Cowboys that feel clichéd or stilted (especially those segments involving Host Bo Derek), but for the most part, this is a richly engaging documentary about a sport has seen a significant rise in interest in the past few years. It provides an intimate look into the lives of some of the toughest real cowboys you're ever likely to find, and shows just what kind of family atmosphere surrounds a sport that asks its participants to risk their lives every time they compete. My childhood dreams of being a cowboy may now be long gone, but watching Adrenaline Cowboys reminded of the bravado and charm, of the cowboy lifestyle, that initially made me wish I could ride a horse and rope some cattle. That feeling alone is enough to make this film worth your time. 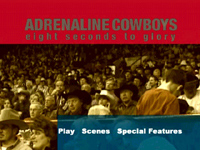 Adrenaline Cowboys is presented in a letterboxed 1.66:1 format that, even aside from the fact that it's non-anamorphic, has some major issues. Many of the problems with this transfer may be the result of poor source material, but some are just inexcusably distracting. I didn't expect a perfect visual presentation for a documentary such as this, but I also didn't expect to see blooming colors, pixelation, motion artifacts, and a myriad of other blemishes all over the film. Some of the film is intentionally made to look like vintage, stock footage - complete with scratches and spots - but it's clearly intentional when this appears. I'm not sure what the excuse is for the rest of the film looking so poorly. The opening sequences with Bo Derek are so bright and shimmering that they are nearly unwatchable. Whites bloom so badly that the rest of image actually looks washed out. That's not to say, however, that this transfer is a complete and utter mess. Some of the action scenes of the bull riders in the arena look nice. They even appear to have a touch more detail than the rest of the film. Sure, this isn't a visually stunning film to begin with, but a better effort could have been made with this transfer. The film is definitely watchable, but this sub-par visual presentation becomes quite irritating at times. 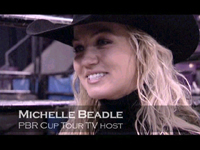 The audio on this disc is presented in a Dolby 2.0 stereo format that also has its fair share of problematic areas. Dialogue is mostly clear and concise throughout, though there is a low-level hiss that becomes apparent several times during the film. The opening sequences with Derek - the same sequences that look horrendous - sound pretty horrible as well. Not only is her speech slightly muffled for a portion of the segment, but also the overwhelming sound of wind blowing is very distracting. This annoying ambient sound makes another appearance later in the film as Kelly Armstrong is driving his big-rig to an event. The soundtrack, for the most part, is loud and well balanced with the rest of the track. Even though I hated the actual soundtrack of the film, it is presented fairly nicely on this audio track. Louder moments in the film also become a bit muffled at times, and are sometimes accompanied by a slight rumbling. Despite all these shortcomings, this audio presentation succeeds in that it does exactly what it needs to for a film like Adrenaline Cowboys. Dialogue is always discernable (no matter how distractingly muffled) and, for a documentary, that is paramount.

Extras:
There are only two short extra features on this disc. The first is a very brief featurette on Mike White that basically gives the viewer a few extra tidbits about the life of Mike White. Some of this information is actually repeated from the film, so there's little to be gained here. It would have been nice if this feature had actually delved even more deeply into the life of White.

Also included on this disc is another short featurette that details the life of a cowboy. This feature (vaguely titled "DVD Extras" on the Special Features menu) also retreads some of the same ground covered in the film itself with a little extra emphasis on what's important to leading the cowboy lifestyle. What we have here is another feature that has the potential to be very insightful, but ultimately ends up being too brief and fleeting.

Final Thoughts:
Nearly everyone, undoubtedly, has seen those wacky sports bloopers shows at one point in their life. It seems like every installment has to have at least one clip of some poor bull rider being thrown up in the air and gorged by a bull. For those unfamiliar with the sport of Professional Bull Riding, these clips (and the ever-present baseball-to-the-groin) are always a source of hilarity. Watching a film like Adrenaline Cowboys, however, will change your viewpoint on those clips forever. The documentary not only shows the obvious risks of such a dangerous sport, but also provides a glimpse into the lives and families of the people who absolutely love risking their lives on the back of a bull. Not only will you learn a lot about the sport and its competitors, but you'll also never look at bull riding the same way again. With such a sub-par audio-visual presentation, and the lack of any very significant extra features, I was tempted to tell you to skip this disc. The power of the film itself, nevertheless, is what makes this disc worth at least a rental.