O.C. - The Complete Second Season, The 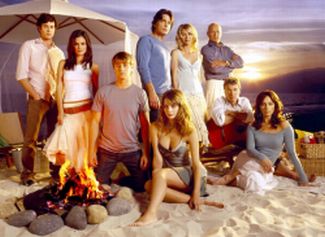 Jumping into The O.C. Season 2 without ever having seen the initial season is a little like watching The Godfather Part 2 or Return of the King without having seen the originals. Or, more accurately, it's a lot like watching a modern version of Beverly Hills 90210, only one with a much more self-referential approach and a decidedly more clever sense of humor.

Without having seen any of Season 1, and diving straight through the first dozen episodes of Season 2, here's what I gathered: The O.C. is about two guys, two girls, two parents, one evil stepmother, and a whole handful of stunningly photogenic supporting characters, all of whom wander around the toniest part of Southern California and air their dirty laundry for all the community to see.

The boys are Seth (Adam Brody) and Ryan (Benjamin McKenzie); the girls are Marissa (Mischa Barton) and Summer (Rachel Bilson); the parents are Seth's, and they're played by Peter Gallagher and Kelly Rowan. Much like 90210, The O.C. features several ridiculously tenuous romantic entanglements, betrayals and backstabbings galore, more blue-blooded intrigue than you can shake a scepter at, a high school setting that looks like nothing you'll ever find in reality, and a handy-dandy hangout spot where all the exposition unspools. Oh, there's also a devious old rascal of a grandfather called Caleb, his trophy-wife mega-bitch manipulator Julie, a sweet young innocent by the name of Lindsay, a sexy barmaid called Alex, and Julie's free-wheeling ex-husband Jimmy. Plus a lot more recurring characters, none of whom are ever dull.

It ain't high art, TV fans, but what The O.C. does have that most similar series do not -- is a sense of humor. Take the lead noodnik, for example; As Seth Cohen, Adam Brody is an unending collection of tics, insecurities, and neuroses -- yet the actor plays the handsome nerd like he's Vince Vaughn's little brother. For a show so swollen with contorted plot twists and hoary old soap opera conventions, its greatest pleasures come from the simple, snippy, and surprisingly clever conversations between Seth and Ryan.

Indeed, it's almost like Brody's consistently amusing character exists in a separate world from the rest of The O.C.; when the series chooses to focus on the "who likes who" material and the unending parade of "eavesdropping = heartache" plot machinations, The O.C. starts to get more than a little repetitive. There's only so many episodes you can wring out of the "Seth/Marissa finds a new girl/boyfriend and Summer/Ryan doesn't like it" puzzle pieces, but that doesn't stop the show-runners from dipping into that well over and over again. 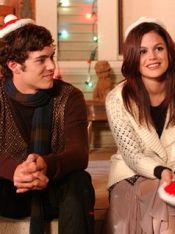 No, the most fun you'll derive from The O.C. (and to be fair, it's a night-time teen-soaper that has no problem referring to itself as a "guilty pleasure") comes from the frequently biting and self-aware dialogue, and the charming performances from much of the cast -- although Brody and Gallagher are clearly having the most fun here.

And while The O.C. still isn't something I'll seek out and TiVo every time it comes on, I'd be lying if I didn't see the appeal of trashily captivating and entirely predictable escapist fodder of this ilk. Heck, it wasn't that long ago that I'd never miss an episode of Melrose Place (OK, actually it was.)

I've been told by my crack team of TV geeklets that the first season of The O.C. is, frankly, a helluva lot better than the second -- but I had a goofy good time with S2 all the same. The plot threads and divergences are certainly nothing new, but The O.C. knows precisely what sort of show it is, and it's not afraid to poke some fun at itself -- while always being sure to deliver the well-scrubbed teenage angst that is the hallmark of the Fox network.

And it doesn't star Tori Spelling. That alone makes it better than 90210.

Here's what you'll find on each of the platters. (Synopses come courtesy of the rather slick booklet that comes included with the DVDs. Spoilers reside within said synopses.)

Episode 1: The Distance -- Come home, Seth! If Sandy can't persuade his alienated son to return to the family, perhaps Ryan can. Meanwhile, Theresa realizes her relationship with Ryan is on life support. Time to pull the plug? (Original airdate: 11/4/04)

Episode 2: The Way We Were -- The boys are back. Except: Summer won't kiss and make up, Ryan catches Marissa in a clinch, the DA busts Caleb, Hailey bails and the remodelers are like a wrecking crew. Home sweet chaos. (11/11/04)

Episode 3: The New Kids on the Block -- Seth pulls off a magnanimous gesture for Summer, then blows it. Lindsay and Ryan become physics lab partners and share some romantic chemistry. Embattled Caleb names Julie as Newport Group's CE-uh-O. (11/18/04)

Episode 6: The Chrismukkah That Almost Wasn't -- Friends, festivities, 8 days of gifts, another day with a whole lot of gifts. Seth's formula for the perfect Chrismukkah may come undone when Caleb's confession rocks the Cohen world. (12/16/04)

Episode 7: The Family Ties -- Time to move on: Jimmy decides to relocate to Maui. Time to make a move: Ryan and Lindsay wonder about a first kiss. Time to bust a move: Seth turns bad boy in an attempt to impress Alex. (1/6/05)

Episode 8: The Power of Love -- Sandy didn't forget his 20th anniversary. Honest. Just ask him. And just watch him squirm as he tries to make things right. Also: Seth and Ryan are grounded; D.J. calls it quits with Marissa. (1/13/05) 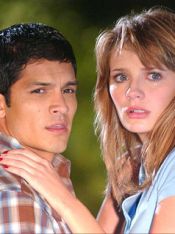 Episode 10: The Accomplice -- Ryan tries to smooth things over between Caleb and Lindsay, Alex and Marissa grow closer, Seth uses his life as inspiration for a comic book and Kirsten is uneasy when Sandy is asked to help find his ex-fiancee. (1/27/05)

Episode 11: The Second Chance -- Try try again. A cardiac crisis gives Caleb a new outlook. Seth and Summer struggle to deny their attraction. And if, as Sandy says, Rebecca is dead, why does Kirsten find her in Sandy's office? Uh-oh. (2/3/05)

Episode 13: The Father Knows Best -- Did they or didn't they? Seth can't stop thinking about Summer's and Zach's stay in San Diego. Will he or won't he? Julie plants doubts that could derail Caleb's decision to adopt Lindsay. (2/17/05)

Episode 15: The Mallpisode -- The Seth/Summer plan to help Ryan shake his Lindsay blues is ... a mall visit? Hey, it can work. Because Marissa comes along. And everyone gets locked inside the place. An extortionist targets Julie. (3/10/05)

Episode 17: The Brothers Grim -- T is for trouble. And for Trey, Ryan's brother, who's out of prison and trying to go straight while staying temporarily in the pool house. The tape no one was supposed to see is seen by all of Newport. (3/24/05)

Episode 18: The Risky Business -- A yard sale sans yard - aka The OC Charity Yard Sale! But it does offer many items, including the crystal egg from Risky Business. But wait ... the egg is missing, and Ryan and Seth must scramble to get it back! (4/7/05)

Episode 19: The Rager -- Marissa throws a birthday party for Trey - an event that may or may not smooth things between the two Atwood brothers. Julie gets cozy with Lance, her long-ago lover and recent extortionist. (4/14/05)

Episode 20: The O.C. Confidential -- The evidence adds up. Trey is likely to do time for drug violations. But Sandy, Ryan and Marissa know he's innocent and develop a plan to catch the real culprit in the act. Seth meets a marketing ... genius. (4/21/05)

Episode 21: The Return of the Nana -- Nana's getting married - news that has Sandy, Seth and Ryan off to Miami. Back at the OC, Zach wows Summer with a home-cooked meal, Kirsten sorts out her Carter feelings and Trey's feelings for Marissa take a terrifying turn. (5/5/05)

Episode 22: The Showdown -- Dynamite with a lit fuse: Kirsten goes on a bender now that Carter's gone, Ryan can't figure what's up with Marissa, Caleb hits Julie with divorce papers, and the Seth-Zach rivalry turns into War of the Weirds. (5/5/05)

Episode 24: The Dearly Beloved -- Familiar faces show up for a final farewell to Caleb. Meanwhile, Sandy takes action to help Kirsten. And when Ryan learns about the Trey-Marissa incident, a showdown - if not a tragedy - is inevitable. (5/19/05)

Video: The episodes are presented in a surprisingly strong Widescreen Anamorphic presentation. I'd no idea the series was presented this way on the Fox network, mainly because I'm way too busy watching awful DVDs on weeknights... I digress. Suffice to say that you oh-see fanatics (and I know you're out there) should be quite thrilled with the picture quality offered here. And let's face it; with a cast this gorgeous, you really don't want a shoddy picture quality. 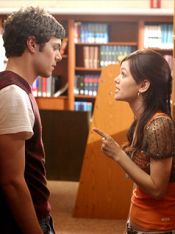 On disc 2, episode 6 you'll find an audio commentary from series producers Josh Schwartz and Bob DeLaurentis, and on disc 4, episode 14 you'll get a commentary with Schwartz, producer Stephanie Savage, music coordinator Alexandra Patsavas, and editor Matt Ramsey. Both tracks are suitably laid-back and jocular, with the series creators sharing their fair share of production stories. Best of all, while they clearly enjoy their work, none of the commentators take The O.C. too seriously.

Disc 6, episode 21 comes with one deleted scene, but the bulk of the supplemental material comes on Disc 7. That's what you'll find a pair of featurettes: Beachy Couture (15:25), in which the cast and costume designers share their thoughts and inspirations for all the fancy clothes found in The O.C., and The O.C.: Obsess Completely (32:44) which focuses not on Season 2, but Season 1. Still, it's a cool little retrospective piece that the hardcore fans will enjoy having. Produced as a promotional piece for Fox, the featurette delivers lots of cast chatter, show clips, and "fan favorite" moments.

The O.C. is slick, it's silly, and it's all but entirely superficial -- but it's also a good juicy soap-opera that fits like a tacky pair of slippers, it's a lot funnier than one might expect from a series of this ilk, and while it's a show that might get really stupid now and again -- at least it's never boring.