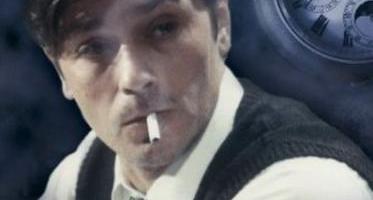 The Film:
Flic Story a.k.a Cop Story retells the odyssey of famous gangster Emile Buisson who during the late 40's made quite a name for himself by terrorizing the French police in a most uncompromising manner. Filmed by Jacques Deray (Borsalino & Co.; Un Crime; Le Gang), a marquee name within the French gangster genre Flic Story boasts a formidable cast of actors such as Alain Delon (Borsalino), Jean-Louis Trintignant (Kieslowski's Red), Renato Salvatore (La Luna), and Claudine Auger (A Bay of Blood) among others. Structured in a chronological manner by the cop-narrator that nabbed Emile Buisson (Jean-Luis Trintignant) Flic Story follows a series of failed attempts by inspector Roger Borniche (Alain Delon) to infiltrate the gangster's circle of faithful associates. After years of bold and daring crimes Emile Buisson is finally cornered in a remote country inn where he has been hiding from the French police. Unsuspecting that his captors are dangerously close Emile orders a bottle of wine with some cheese and bread. Seconds later he is cuffed by inspector Borniche and taken to prison. What follows up is long hours of confessions collected in a series of notebooks kept by the local police department.

There are two reasons why this film works and it does not develop into a boring summation of an infamous gangster and his even more infamous deeds. First of all the cast is absolutely superb as they deliver some very convincing performances infused with the dark suspense one would discover in Jean-Pierre Melville's early films. Second of all, the camera work is sleek, the manner in which the main protagonists present themselves very suggestive of the late noir genre (Alain Delon is always seen slowly smoking his cigarette, Jean-Louis Trintignant and his accomplices are always dressed in impeccable suites, and Claudine Auger plays the role of Catherine, the sophisticated seductress, to perfection) and last but not least the music is flawlessly complimenting the narrator.

Flic Story certainly reminds us about the glorious days of French gangster films when Gean Gabin (The Sicilian Clan), George Raft (Rififi in Paris), Lino Ventura (Three Tough Guys), Alain Delon (Borsalino), and Jean-Paul Belmondo (The Hit Man) among others were in their prime. There is something that words can not explicate which one is bound to experience seeing films such as Flic Story- a feeling of nostalgia about a time when gangsters had the kind of manners even noblemen lack nowadays, the women were as elegant as Versace models, and film directors did not have to blow up thousand kilos of stage explosives to make their films "believable". The cool character that Alain Delon unveiled in Jean-Pierre Melvillle's Le Samourai is easily detectable in his cold but piercing eyes in Flic Story. While the script requires him to portray a different kind of hero the stylish acting which Alain Delon delivers is a beauty to behold. You can add to the mix a young but very convincing Jean-Louis Trintignant who years later Krzysztof Kieslowski will rely on to a great extent in his final installment from the Three Colors trilogy and you have quite a film that deserves to be seen.

Co-produced by France and Italy and shot in Eastmancolor Flic Story obviously has a dated look but one that I certainly find to be of excellent quality. Based on the perhaps biased memoirs of inspector Roger Borniche this is a dazzling film that begs to be rediscovered. An unforgettable epic reminding us about a time that has arguably inspired some of the greatest films ever made Flic Story is not to be missed.

The Alain Delon Collection (a gallery of 10 trailers)-

Final Thoughts: These are the kind of films that every year I hope studios will do justice by providing a spectacular transfer. One of the all-time French classics Jean-Pierre Melville's Le Samourai is nearly here, Jules Dassin's Rififi is already out, Jacques Deray's Borsalino is not. Kino Video have acquired (regrettably?) the rights for the Alain Delon collection which Pathe-France released almost a year ago with a spectacular quality. Unfortunately, once again the US market gets snubbed by what I can describe only as mediocrity. Until the powers to be realize that film-lovers are not mindless monkeys I recommend that (best case scenario) you RENT this film.