WWE Tombstone - the History Of the Undertaker 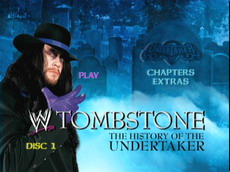 This latest retrospective from the WWE pays tribute to Mark Calaway aka the Undertaker who gained popularity during the WWF's transitional period between the Hulk Hogan/Cyndi Lauper era and the "Attitude" era. After the WCW decided not to renew his contract, he signed with the WWF and made his debut during 1990's "Survivor Series" as a teammate of Ted DiBiase's "Million Dollar Team" (a match that isn't on this set). From there, he got himself a new "manager" (Paul Bearer) and made an impression at WrestleMania VII where he defeated Jimmy Snuka (another match not included). These days, it seems as if championship belts change hands faster than Paris Hilton's home movie costars, yet it took Undertaker one whole year to become Heavyweight Champ by defeating Hulk Hogan (this match IS included!).

From there, "the Phenom" took the WWF by storm and racked up a number of achievements. During a feud with "the Heartbreak Kid" Shawn Michaels, he took part in the company's first-ever "Hell In A Cell" match and the following year, he wrestled Mankind in another "Hell In A Cell" match, clips of which are still shown to this day. In addition, he has an impressive record-setting 13-0 streak at WrestleMania.

Since I had stopped watching wrestling in the late 80's, all of the content on discs one and two were new to me. Disc one features seven matches against people like Hulk Hogan, Bret Hart and Yokozuna. It was great seeing these early matches for the first time and I was quite surprised that the old "WWF" logo was on display in the majority of the matches. However, there's no rhyme or reason to when the "WWF" logo is blurred or not. For example; during his "Hell In A Cell" match against Michaels, the "WWF" logo is all over the place - even in the corner of the screen! Yet, during his "Cell" match with Mankind, the WWE logo is in the corner and the "WWF" logos on the ring posts are blurred. Weird, I know.

Disc two features the previously mentioned classic "Hell In A Cell" matches, one against Mankind and the other against Shawn Michaels which also introduced his "brother" Kane. Unfortunately, I thought disc three was the least interesting. I'm not sure if it was due to the Undertaker's reemergence as the "American Bad Ass" (in essence, a biker complete with leather, tatts and headband) or the quality of matches against such "wrestlers" as Brock Lesnar and John Cena. However, I did enjoy his match against Stone Cold (one of his last before adopting the "Bad Ass" persona) and his Undisputed Championship match against Kurt Angle.

Here are the matches included: 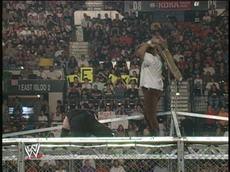 Video: As usual, this one is presented in the full frame 1.33:1 ratio and, while there is some slight differences in the textures of the video (depending on its age), it was a pretty attractive transfer considering the amount of content on each disc.

Audio: The Dolby Digital 5.1 sound was crystal clear and enveloped my living room while I was watching it. There's also an option of watching the disc in Spanish.

Packaging: I feel it's my duty to comment on the packaging for this set. While I do appreciate the WWE taking my shelf space into account and using a standard size DVD case, they've chosen to use one that has one hub and you place the three discs one on top of the other. Frankly, this is a pretty boneheaded move since it would've been just as easy to use which has a flap in the middle to hold two disc securely, while the third attaches to the standard hub. I've read stories about fans opening theirs to find one disc scratched thanks to the hub not being strong enough to hold all three discs. In fact, the review copy I received was the same way.

Conclusion: Since I had stopped watching wrestling in the late 80's and resumed late in 2002, I was only familiar with the Undertaker as a bandana and sunglass wearing "American Bad Ass" covered in tatts and sporting a buzz cut. And let me tell you, he was far from impressive. However, after watching the matches and skits on the first two discs, I gained a new appreciation for the Undertaker as a character and Mark as a wrestler. Though, in doing research into the Undertaker's history, I see that there's a lot the WWE has left out. I realize it might be hard to condense close to fifteen years of history on three discs, but judging by the pop he gets, i'm sure there are plenty 'Taker fans that wouldn't be that upset if this was the first volume dedicated to the Undertaker. Perhaps if sales of this set are strong enough, it just might be. Recommended.