Resurrecting the legendary rivalry between Italian painter Modigliani and Pablo Picasso Modigliani is a film that transports us to Paris in the beginning of the century during a time when the genius of Renoir is held in high regard. Often inebriated, drugged, without a penny in his pockets, but always willing to "discuss" the merits of his paintings Modigliani (Andy Garcia) is a man living on the edge. Literally, as his lungs are in an extremely poor condition, he has no money to provide for his illegitimate child, and he also happens to be a Jew madly in love with a Catholic girl (Elsa Zylberstein).

When his father-in-law announces that Modigliani's child will be sent to a convent in order to be spared from his indecency the unpredictable Italian maestro decides to enter Paris' annual art competition where a Grand Prize of five thousand francs will be awarded to the most daring and original painter. A prize this big would certainly allow Modigliani and Jeanne, the love of his life, to begin anew and provide for their child. But when a fellow-painter, the great Picasso (Omid Djalili), challenges Modigliani and his creative vision the art competition suddenly transforms into much more than a simple contest. 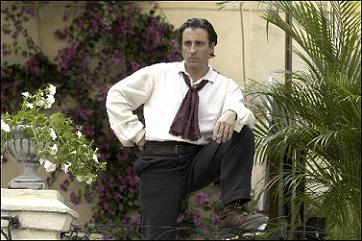 Directed by Mick Davis, better known for his involvement with the sequel to the now notorious 9 ½ Weeks, Modigliani left me with somewhat mixed feelings. Despite a remarkably solid cast the film visibly fails to deliver on a number of different levels. That certain element of credibility that separates average films from the really good ones is obviously not present in Modigliani and in my opinion part of the issue stems from the fact that the narrative is not structured in an adequate manner. There are simply too many loopholes in the story that prevent Modigliani from being an engaging production.

Perhaps the biggest surprise, however, is the harsh contrast between Andy Garcia and the rest of the supporting cast. It is almost painful to watch the tremendous gap between the passion which Andy Garcia brings to the screen and how everyone else responds to it. As a result there is a visible lack of cohesiveness between the main actors which becomes painfully unbearable during the second half of the film. Even the always reliable Elsa Zylberstein falls short of recreating a convincing portrait of Modigliani's love partner-her acting is often rather forced and some of the lines she is provided with extremely disappointing. It truly feels as if Andy Garcia was the only one that took this curious project seriously enough while everyone else joined along for the ride.

I am not convinced that this ambitious period piece could not have looked better especially considering the fact how delicate its camera work is. The cinematography of turn-of-the-century Paris looks absolutely stunning with gorgeously lit street cafes, lush architecture, and excellent costumes. Yet the acting required to support the plot is simply not there. Strange…yet, disappointing as this could have been an excellent film recreating one of the most exciting periods of our modern-day history.