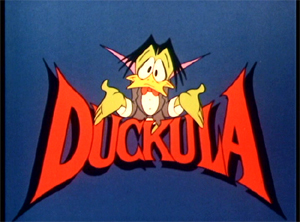 "Castle Duckula, home for many centuries to a dreadful dynasty of vicious vampire ducks. The Counts of DUCKULA! Legend has it that these fowl beings can be destroyed by a stake through the heart, or exposure to sunlight. This does not suffice, however, for they may be brought back to life by means of a secret rite that can be performed once a century, when the moon is in the eighth house of Aquarius. The latest reincarnation did not run according to plan."

To say that I was a fan of Count Duckula when it originally aired would be an understatement. I made time to watch it whenever it was on and used to know the theme song by heart (which undoubtedly drove my parents crazy). It had many similarities to Disney's Duck Tales, which was another personal favorite of mine, but because it was produced by the British studio Cosgrove Hall, it had a completely different tone. 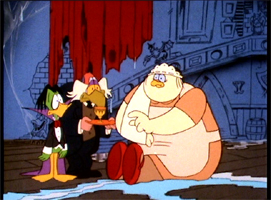 You may recognize the name Cosgrove Hall from one of their earlier sensation known as Danger Mouse. That show was actually where Count Duckula saw his un-life begin. The character was actually a recurring villain and first appeared in the episode, "The Four Tasks of Danger Mouse". The spin off show featured a slightly different twist on the vampire duck theme but still had the great sense of humor that Cosgrove Hall had become known for. In order to understand the show, you need to understand just who Count Duckula really is.

During the secret ritual of reincarnation, the Duckula servants Igor and Nanny made a disastrous mistake. Instead of using Batswing Blood, a bottle of ketchup was poured into the vile potion. The result of that grievous error brought about a vampire who didn't really fit the stereotype. You see, this new Count Duckula didn't crave blood, wasn't affected by sunlight, and couldn't hurt a fly. What was created was a vegetable eating undead duck with a desire to be a stage performer and a knack for turning tail and running when the going got tough.

Despite being a less than fearsome vampire, he is still the lord of Castle Duckula and thus the boss of Igor and Nanny. Nanny is a giant chicken whose right arm (wing?) is constantly in a sling. She is relatively Frankenstein-like and often crashes through a wall instead of using the door. Nanny has a heart of gold but a brain the size of a walnut, so it comes as no surprise that she's the butt of many jokes. Igor however, is the complete opposite. He has an acerbic, yet dry, wit and a black heart that desires Duckula to be more evil. 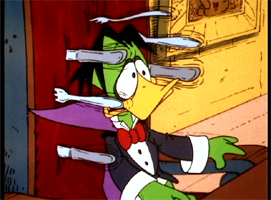 There are also many recurring secondary characters such as Dr. Von Goosewing who is a self proclaimed vampire hunter, a group of thieving crows that want to steal riches from the castle, and two old bats (Dmitri and Sviatoslav) that live inside Duckula's wall clock and spout bad puns much like Statler and Waldorf from the Muppet Show. The narrator for the show also plays a big role for the appreciation of the material. While we never get to see him, but he spouts some ghastly comments with a ghoulish narrative.

The home of Duckula is also an integral part of the show thanks to its ability to travel anywhere around the world. Once the Count decides where he wants to go, he simply has to run into a coffin, then after a little light show the castle is transported across the globe. It sounds silly, but this little element was a big factor of the show's success. Instead of taking place in the same location every week, the characters move about whenever necessary and it really helps to break things up.

While it wasn't as widely accepted as Danger Mouse was, Count Duckula proved to be a moderate success and in all 65 episodes were produced for the show. During the time that this was airing, it helped put Nickelodeon on the map and in my opinion brought the channel into its golden age. Since the final episode aired in 1993 though, not much has been heard from the dear Count. You may have been fortunate enough to find a rerun here and there (though I never could), but a home release was nowhere in sight, at least not until now. 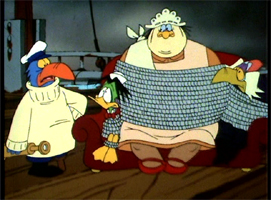 The three disc box set has just been released and it features all 26 episodes from the first season. Some of the more memorable adventures are available here and they prove to be just as entertaining now as they were roughly 16 years ago. As with any show you have to take the good with the bad, but fortunately there is more to appreciate in this season than there is worth skipping. Some of my personal favorite episodes include "Dr. Von Goosewing's Invisible Ray", "Mutinous Penguins" and "The Vampire Strikes Back".

In "Dr. Von Goosewing's Invisible Ray", the good doctor develops a weapon that can turn him invisible. After all, the best way to get close to a vampire to stake him is if you can't be seen. Unfortunately the machine goes haywire and starts rearranging people's bodies. Count Duckula also practices some yoga and decides he wants to be a magician for a living.

"Mutinous Penguins" is another classic that features the lead characters on a search for the castle on the arctic waters. Of course things can't go smoothly though and they soon get tied to a comfy sofa and marooned on a deserted iceberg. Some Vikings thaw out thanks to Nanny's cooking, but fortunately Von Goosewing shows up just in time for a quick get away.

And in "The Vampire Strikes Back", Duckula counts out 15,000 box tops from Crunchy Munchy cereal and sends away for Tremendous Terence Space Hero kit. Von Goosewing blasts the Count, Igor and Nanny into space where they meet Tremendous Terence himself. They soon find themselves trapped on the planet of the Kutes. The world is full of sickeningly cute bunnies and hills of lollipops and cotton candy, but things get worse once everyone is sprinkled with Happy Dust.

To say that Count Duckula is a bizarre show would be a bit of an understatement. The characters are hilarious, the adventures are unique and the show has such an air of fun about it that kids and adults alike will fall in love. This series may not be for everyone's taste but if you think you could enjoy a British comedy cartoon that has a dash of the Adam's Family then you're in for a good time. 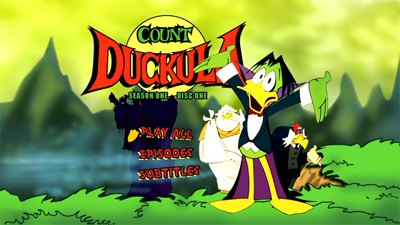 Originally broadcast in 1988, Count Duckula is presented on DVD with its airing aspect ratio of 1.33:1. For all intents and purposes, the show looks significantly older than it should, though it varies from episode to episode. There is quite a lot of grain to the image, a decent amount of aliasing, and a slew of speckle across the image. The picture is never really sharp and there are slight amounts of blur and fuzziness at parts. All of this comes together to make one wonder just how poorly the original material was stored, since most of these flaws appear to be content related instead of a product of the DVD.

The show is, and has always been, naturally gloomy, so there are quite a lot of dark shadows and dull, washed out colors. Since the show travels around the world a lot though, there are plenty of opportunities for locations other than Transylvania to cast vibrant colors. In that regard the contrast holds up very well, though at times some colors do bleed into others.

With the age of the material, the only audio transfer here is in the form of 2.0 English stereo. It sounds very good despite how much time has passed since its recording, though there are a couple of issues that pop up. At many points there is a noticeable hiss in the background and sometimes the audio balance becomes slightly erratic. Some episodes sound louder and better than others, but it never gets to the point that it's difficult to hear what's being said. Optional English subtitles are included on the set as well.

The first season of Count Duckula features a good amount of bonus material that's definitely worth checking out. Some if it is a little out of the ordinary too, which is a definite plus.

Restoring Duckula - This little feature is a split screen look at the difference in quality of the original material and the digital of the DVD. The quality is definitely noticeable and it's interesting to see the comparison. There is about fifty seconds worth of animation that is set up like this and is worth taking a look at.

How to Draw Count Duckula - With an introduction by senior producer/director of Cosgrove Hall John Doyle, this four minute featurette shows you how Duckula gets drawn. The video watches over Mike Whaite's shoulder as he pencils out a quick sketch of the vegetarian vampire. It's not all that detailed of an extra, but is a nifty little diversion for those of you who are artistically inclined. There is also a separate character artwork gallery feature that offers completed artwork stills and some concept drawings from the show.

There are also two interviews featured on the box set that are worth watching for anyone who is a fan of Cosgrove Hall products. The first interviewee is Brian Cosgrove, who was one of the founders of the animation company. He talks about how he got into the industry, what inspired him to create the characters that he did, and also the prospect of bringing Duckula back for a new generation. The second and much briefer interview features John Doyle (producer) talking about the Duckula show and what it was like to work on it. 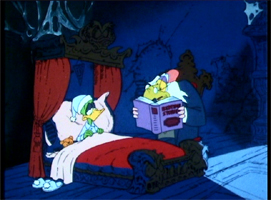 I used to love Count Duckula when I was a kid and going back to watch the show again on DVD reaffirms that. The humor and concept are timeless and the material on the first season is some of the show's finest. Some episodes are obviously better than others, but there is very little to complain about as far as that goes.

My biggest complaints come from the quality of the DVD. It is quite evident that the original material wasn't stored as well as it could have been and even though the transfer here cleans up a lot of the print flaws, there are still several artifacts that plague the image. The audio is acceptable and the extras are appealing enough to take a look at. In the end the season one box set is definitely worth sinking your teeth into. Recommended