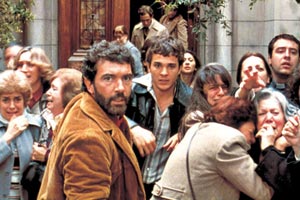 Focusing on the tragic events after the military coup from 1976 until 1983 Imagining Argentina is a film that strives to recreate a realistic picture of the abuse and political repressions which thousands of leftist sympathizers experienced in the land of Eva Peron. Many of them disappeared without a trace prosecuted by a government that encouraged "proper techniques" to squash the rising discontent between millions of Argentineans. It wasn't until 1982 however when the military elite finally faced some harsh criticism over the Falkland Islands' crisis and eventually stepped down revealing a chilling record of countless deaths. To this day the families of those that disappeared are still hoping for justice.

Based on the 1987 novel by Lawrence Thornton Imagining Argentina boasts a stellar cast of internationally renowned actors such as Antonio Banderas (Carlos Rueda), Emma Thompson (Cecilia Rueda), and Fernando Tielve (Enrico) among others. The plot of the film is rather simple. Carlos Rueda is desperately trying to discover the whereabouts of his politically outspoken wife who has been kidnapped by the Argentinean secret police. But Carlos, who works as a stage choreographer in a local children's theater, hardly has any leads to rely on. His only hope is his recently discovered ability to "connect" with other people although they might be hundreds and hundreds of miles away. Determined to find out what really happened to his wife Carlos embarks on a treacherous journey with many unknowns.

Imagining Argentina is likely to draw some parallels with Costa-Gavras's film Missing (1982) about a father in search of his missing son. However, while Costa-Gavras' film relied on a well-paced narrative Imagining Argentina somehow fails to deliver the urgency one would expect from such a politically charged picture. Unfortunately after a well put-together introduction the film veers off in a direction that would have been more suitable for a mindless late-night production-the overused by Hollywood supernatural thrillers that have very little to offer to those interested in serious cinema certainly come to mind. Imagining Argentina should have been much more than that. The cast and more importantly the story beg for a different approach and at least as far as I am concerned it seems like Christopher Hampton simply let this one get away.

This is a film that is bound to spur some extreme reactions and judging by the way it was greeted by both critics and audiences at the Venice Film Festival I think it is fair to say that Imagining Argentina most definitely lived up to the expectations. The narrative, the weakest aspect of this film, obviously leaves much to be desired as it simply destroys the powerful political message(s) which could be found in Lawrence Thornton's novel. As a result the film feels more like an unfinished attempt in originality where The Sixth Sense (1999) meets Missing (1982).

The one shiny spot of this quite unfortunate mess is the partially realistic depiction of violence and torture which somehow keeps Imagining Argentina grounded; the suffering which Cecilia and consequently her daughter are exposed to keeps the viewer alert expecting a climax where all the missing components of this "puzzle" will line up delivering satisfying results. Unfortunately neither the story nor the acting truly elevate Imagining Argentina to what it should have been-a realistic portrait of a country under the influence of a troubled past.