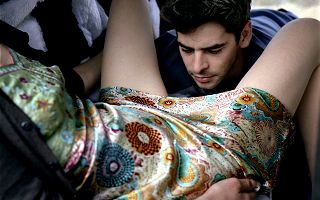 For Graham (Eduardo Noriega) life is indeed a perpetual game of remembering, one which he consistently loses. Diagnosed with a severe case of amnesia-like illness which literally erases all of his memory only minutes after he wakes up Graham lives on the edge of pure insanity. But when he encounters Irene (Anna Mouglalis), a sexy looking temp who has been sent to the local company where he "works" as a copier, all of a sudden not being able to recall what he did the night before transforms from a disastrous illness into a heavenly blessing. Or so Irene tells Graham…as she now claims that sex with Graham is like a never-ending adventure.

Even before you see NOVO in its entirety it will be extremely hard to deny the fact that there are some heavy similarities with the now notorious Memento. After all, just about any film that relies on a plot where the main protagonist is suffering from a memory loss is nowadays being compared to Memento. So, obviously NOVO easily falls into the same category. While Memento however had a very well-put together plot that developed into a story with a serious potential NOVO falls victim of a pretentious script where there is more style than substance. The abundance of sleek camera shots, the quick zooms that would better match a made-for-MTV video clip, even the obvious emphasis on the beautiful bodies of Anna Mouglalis and Eduardo Noriega rank this film amongst one of the few I saw last year where the talent involved with the project did not match well with the final result.

Directed by Jean-Pierre Limosin NOVO had two substantial flaws that nearly destroyed the viewing experience for me. First of all, the story became so transparent that after the initial introduction of the main protagonists I was able to figure out where Limosin was heading in virtually seconds. Second of all, I could not comprehend why with such a talented cast Limosin ended up with a script that Hollywood would have been proud of? There is absolutely no depth in this story and regardless of the "witty" manner it is presented to us, badly fractured and with no coherence whatsoever, as I mentioned above the finale was easily predictable.

So, what did I enjoy? I liked the fact that as with most European films sex was used to compliment the story, not build upon it. I also liked how the two characters seemed to enjoy their bodies without being coy. I liked the fact that the film did not turn into a degrading experience where the viewer would shift uncomfortably into his or her seat struggling to endure a "passionate" scene where the two characters obviously could not wait for the camera to stop rolling. With other words what should have been the least important aspect of this film became its only redeeming quality. I suppose at times one must admit that an excellent cast does not guarantee an instant success. At least that seems to be the case with Jean-Pierre Limosin's NOVO.

Presented in its original aspect ratio of 1.85:1 and enhanced for widescreen TV's NOVO looks well-above average but not excellent. Tone colors appear accurate and mostly well-saturated, contrast is at an acceptable level, and edge-enhancement is not too distracting. What did not sit well with me is the edgy-look the print has…at times it becomes razor sharp and only seconds later it goes into a soft mode which could be a bit distracting. But then again, NOVO has the same grainy/sharp look on the French DVD so it is fair to assume that this is how it was theatrically shown. Aside from that I think that this is one fine presentation which should appeal to those that are willing to give NOVO a try.

Sadly unlike the UK Tartan DVD which offers an excellent DTS track the R1 version of NOVO comes only with a French 2.0 track with optional English subtitles. I don't have any reservations with the 2.0 track but it would have been nice to have at least a 5.1 track included. Why not?

Aside from a few trailers provided on this DVD there is nothing else to be found.

While not overly original, in fact NOVO is quite predictable even by Hollywood standards, this is a film that can easily appeal to your wilder side. With plenty of eye-candy and a beautiful cast to behold why not give it a try, you might be surprised by what you get…RECOMMENDED.