The Show
In the days before the Internet, but after the birth of cable, late-night HBO programming was the teenaged boy's best chance to see some nudity. Among those shows was "1st and Ten," a football "comedy" that followed the California Bulls, a fictional pro team in the NFL-stand-in North American Football League. Running for six seasons between 1984 and 1991, the show was practically a sure thing when looking for some pre-bedtime boobs. Beyond that, there's not much else I remembered of the show.

Watching this complete collection, I found a series that is hardly a comedy, despite an intrusive laugh track in the early going. What it is, is a prototype for ESPN's dramatic series "Playmakers," which started with a pro football team and went beyond, into a world of celebrity, drugs, money and sex. The show struck a little too close to home for the NFL, who pressured ESPN to drop it.

"1st and Ten" takes that same trip, but interjects a base brand of sitcom-esque comedy into the drama. The end result is a show that's uneven at best, and just silly at its worst. For example, a scene in which a woman is threatened by a maniac with a screwdriver is butted up against a frat-boy prank right out of Revenge of the Nerds. Any real emotion generated by the plots is tempered or destroyed by the jokes.

The players on the team are all one-dimensional characters, from underdog quarterback Tom Yinessa to Bulgarian immigrant kicker Zagreb Shkenusky (John Kassir, "Tales from the Crypt"). That's a good thing, because there's not much talent in the line-up, once you get past familiar faces like Dr. Death (Donald Gibb, Revenge of the Nerds). There actually are a few good actors in the mix, mostly actors just starting out, like Christopher McDonald (Happy Gilmore), Christopher Meloni ("Oz") and Kevin Sorbo ("Hercules"), but the level of acting, for the most part, is on par with a soap opera...a bad soap opera. 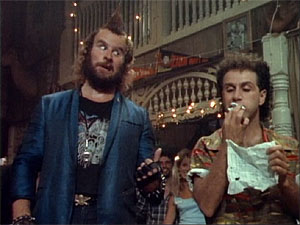 Key among those bad actors is the show's biggest star, a pre-controversy O.J. Simpson. Simpson grins and grimaces his way through the series, playing T.D. Parker, a former player who becomes a coach and then general manager with the Bulls, while dealing with his infidelities and family problems. It's odd to watch Simpson act after watching him at his trials, especially when he talks about being a bad husband. What he did bring to the show was football legitimacy, a factor helped by the scores of athletes who guest starred.

The progression of the series is its best aspect, as each season covers a season of football. From the off-season to the post-season, the team moves along, signing and trading players, while dealing with the athletes' lives and the staff's work. Because of this format, the show mimics the reality of sports, which is a world of change, making it attractive to fans to follow along. New prospects are introduced, older players leave, and off-field business is always important.

The biggest part of that off-field business is the ownership of the team, which is nothing if not fluid. In fact, the fourth season, subtitled "The Bulls Mean Busine$$," in focused on just this matter. In the first episode of the show, Diane Barrow (Delta Burke, "Designing Women") takes control of the Bulls when she catches her husband in a compromising position and divorces him. This sets up a ridiculous plotline for the first season, in which her ex conspires with the old-boys-club NAFL front office, to gain ownership again.

Diane's reign as owner is one of the best in the show, but it comes apart, leading to several changes in management, including the players, a corporation and a young blonde named Kristy Fulbright (Shannon Tweed). Each switch changes the dynamic of the series, and keeps it from becoming stale, an impressive feat considering the formulaic nature of the show, which follows relatively the same path each season.

Unfortunately, though it may be varied, the show is stunningly dated and extremely '80s, which is like kryptonite to many. The cocaine and sex-party culture that dominates the show, particularly in the early seasons, will be foreign or comical to most, while the clothing and technology are laughably old-school. For tough guys, the players wore an awful lot of half-shirts and leather, while the cellular and wireless phones are massive bricks. The football side of things is even more irrelevant in comparison to today, as players celebrate wildly over $1 million contacts and teams make just $15 million on TV contracts.

The show's acting and writing aren't the only weak points, as the production value isn't the highest. This is not the HBO of "The Sopranos." The show uses a large amount of stock footage from the USFL, but it doesn't seem like a great deal of thought went into matching the old footage with the new. From incorrect logos on the field, including helmets that don't match those worn by the Bulls, to clips used again and again, even multiple times in a single episode, the footage makes the show feel cheap and lazy. A stronger show could have overcome these production problems, but this show wasn't the one to do it. Football fans may give it a once-over, but most people won't get much enjoyment out of the simplistic comedy and overdone drama. 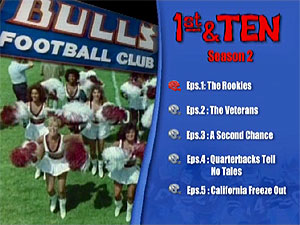 The DVDs
The 80 episodes of "1st and Ten" are spread over 12 sides of six double-sided DVDs, which come packaged in a set of three slipcased thin, black two-disc keepcases. The cases are not the greatest, as the discs come off the hubs easily, and a few arrived scraped, despite such high-tech protection as thin strips of cardstock placed in the middle of each case. The cover on each keepcase lists the episodes included, while the slipcase, though rather well put-together, is pure budget-level, without the show's real logo, and produced with stock photos, instead of art from the show.

The discs themselves have animated, full-frame main menus that list the titles of each episode. There are no audio or language options, or closed captioning.

It's worth noting that the case says "Some scenes may have been altered from the original program." It's been a while since I've seen this show on HBO, but considering it aired commercial-free, yet has commercial fades-to-black, these may be syndication versions. Then again, there are several episodes that include the original nudity and swears, which couldn't have run in syndication. In the end, it's a confusing release.

The Quality
The idea of stuffing 80 episodes onto six double-sided DVDs seems like a bad one on the surface. By comparison, the "House, M.D." DVDs held less than 15 hours on half the media, and looked pretty good despite a lack of anamorphic transfers. Double the discs, you get 30 hours of good video. This disc checks in around that number, but don't look even close in terms of quality.

These full-frame transfers are pretty rough, though they improve from the first season to the last. Night scenes suffer the worst, looking grainy and overly dark, with some scenes coming across as barely visible. The lighter scenes are better, but are filled with video noise, and feature only a minimum of detail, a high level of softness and obvious pixilation. The only positive is the color, which is actually not bad, though it's often dull, like the rest of the image. Earlier episodes, especially during the first season, have a large amount of dirt and damage in the transfer.

There's quite a bit of stock footage used during the series for the football action and other scenes, and it suffers from the same problems as the rest of the show, with the added bonus of age and low-budget production. If it actually matched the rest of the game scenes it wouldn't be so bad, but it's quite different. The later seasons actually had new football footage, but for fans of the defunct USFL, the freqently reused game tape might be interesting to see.

The audio for these episodes is presented in Dolby Digital 2.0, and sounds decent throughout the run. A center-speaker focus makes for a flat soundtrack that delivers clear dialogue and rather strong music, but nothing all that impressive, which is what one would expect from source material of this age and type.

The Extras
There are no extras included in this collection. It's just another example of how low-budget this set is. 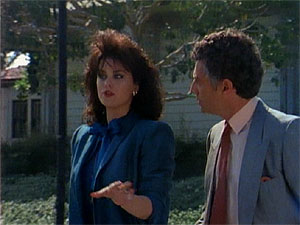 The Bottom Line
My memories of this series are much better than the actual episodes, which are mostly schizophrenic mixes of overt melodrama and broad, unfunny comedy, loaded with some of the worst acting ever seen on television. It may be the rumored edits that have made the show less entertaining, but even if they are there, the remaining material is mediocre at best. The DVD collection fits a bit too much content into a tight package, limiting the video quality and eliminating the opportunity for bonus features. If you have fond memories of the series, stick with them. $20 may be cheap for 80 episodes, but the discs are cheap in their own right and hardly fun to watch.