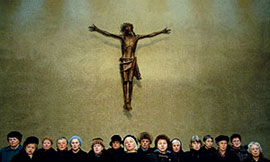 It seems like controversial Austrian director Ulrich Seidl has once again managed to get both critics and religious officials to talk about his films with quite a zest. After his edgy Dog Days (2001) about sexual deprivation his most recent film Jesus, You Know steps in a territory that at least as far as conventional cinema is concerned has long been a taboo subject-the catholic confession.

For six Austrian Catholics life has become an unbearable burden. Each day they are faced with decisions which often force them to step over their "comfort zones"-enduring their partner's obsession with reality shows, living through consistent family abuse, even fending off impure thoughts about committing a crime. Naturally the only place where they turn to find piece and solace for their battered souls is the Catholic Church. There they confess, pray, and hope that God will give them strength to live a decent life.

Minimalist, quiet, yet full of controversy Jesus, You Know is a very unusual film. Shot with a motionless camera this is a film that very much fits a profile we often associate with documentary features. There is hardly any dialog in it, in fact Jesus, You Know is indeed structured as one long and very personal monolog imitating a continuous confession. What strikes as rather unusual, however, is the manner in which the main protagonists, if I could describe them as such, follow Seidl's "script", each and every one of them prays and asks for answers as if they were indeed alone with God.

I find it interesting to say the least that Ulrich Seidl has managed to create this uncharacteristically quiet film after his exploration of such uncomfortable subjects as sexual humiliation (Dog Days) and pet obsession (Animal Love, 1995). It almost seems unnatural that a director with so much destructive power has decided to venture into a territory that many would enter with an already formed opinion. After all, in recent years there have been plenty of films that shredded the sanctity of Catholicism to pieces-from Pedro Almodovar's gay-themed Bad Education (2004) to Lucrecia Martel's La Nina Santa (2004) about illicit lust.

Jesus, You Know however has much more underneath than it willingly reveals. Beneath the narrative of this quiet film which may seem deceivingly transparent to you, there is a sea of emotions that many are struggling to come to terms with. The image of the Catholic Church shattered by consistent scandals has left a bitter taste in the mouths of many that have long regarded the institution as the keeper of moral purity. Obviously what the term "moral" constitutes is now undergoing a much-needed and for many painful reevaluation. I think that to a certain degree Ulrich Seidl is touching upon exactly that kind of a "societal reevaluation" that many ordinary Church-goers struggle to embrace.

Regardless of your religious beliefs I think that you will find Jesus, You Know to be an extremely stimulating and thought-provoking film that offers a look at some uneasy for the Catholic Church times. What is more important however is the manner in which the film is structured. Instead of building on a narrative that directly addresses the Catholic Church Ulrich Seidl has chosen to use a reversed approach where a group of Christians ask God for help. As a result Jesus, You Know works as an excellent religious metaphor where you could read between the lines and find some rather interesting answers.

Jesus, You Know is the winner of the Best Documentary Award at the Karlovy Vary International Film Festival, Czech Republic (2003) and the Vienna Film Award at the Vienalle (2003).

Let's begin with the fact that in a typical for Kino Video manner this appears to be a PAL sourced print. Not so bad however…presented in an aspect ratio of 1.85:1 and enhanced for widescreen TV's the R1 release of Jesus, You Know actually "benefits" from the fact that there is hardly any motion in this film hence the "ghosting" associated with these specific releases is held to a minimum. Everything else looks quite fine to my eyes-solid colors, good contrast, and no visible print damage. With other words for this specific release I would not be overly critical of the fact that we are presented with yet another PAL port, it is quite tolerable.

Presented with its original Austrian language track in Dolby Digital 2.0 and burnt-in English subtitles the film sounds quite well. It is mostly a dialog-driven feature with some sporadic choral music and the Dolby track sounds really well. With all of this said despite the fact that the back cover indicates optional English subtitles they are indeed burnt-in and could not be turned off.

The only extra material on this DVD are a few trailers for previous Ulrich Seidl films which could be accessed through his filmography.

An extremely controversial director that has plenty to offer Ulrich Seidl has put together a curious film that will certainly appeal to those that like films dealing with unconventional subjects. More importantly however this is a film that goes deep into a territory which we don't see that often being explored with such an absorbing camera. RECOMMENDED.