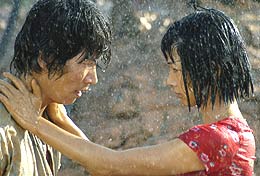 I can not help but think that there is quite a bit of irony in the title of Hans Peter Moland's latest film The Beautiful Country. For Bihn (Damien Ngyen), a young Vietnamese who has to find his mother in the chaotic city of Ho-Chi-Minh and later on immigrate to America where his father resides, nothing has ever been easy. Repelled by his countrymen and abused by those who promise him a better future Bihn will have to reach the lower depths of human ugliness before he arrives at the Promised Land. On his journey to America Bihn will fall in love with a beautiful prostitute (Bai Ling), he will have to decide between a "new start and an old dream", and discover that freedom often comes with a price many can not afford.

Nominated for a Golden Bear Award during the Berlin International Film Festival Hans Peter Moland's The Beautiful Country indeed asks some serious questions and leaves its viewers to find answers in a manner that best fits their own expectations. I suppose one could argue that The Beautiful Country is the complete opposite of Eddie Murphy's Coming to America. Instead of great laughs, a warm-welcome, and a "logical" happy ending The Beautiful Country offers a sobering dose of humiliation, human exploitation, and a shattered image of an impossible dream.

Despite of its harsh premise, however, Hans Peter Moland's The Beautiful Country is indeed one of the more visually striking films I have seen in recent months. Full of spellbinding vistas from the very beginning The Beautiful Country plays with the emotions of its audience by combining exotic beauty with ugliness in a manner suggesting that this will be anything but a pleasant journey to the Promised Land. The dialog is often sacrificed in return for excellent camera work and to be honest I wish Hans Peter Moland would have gone even a bit further. He has an intimidating sense of beauty and without a doubt knows how to capture our attention.

Aside from the excellent performances of both Damien Ngyen and Bai Ling The Beautiful Country also features cameo performances by the always edgy Tim Roth (To Kill A King) and an old time favorite Nick Nolte (Cape Fear). I have always had a soft spot for Nebraska native Nick Nolte and I truly believe that he is one of the most underrated American actors from the last twenty years. Seeing him as Bihn's father only further solidified my assessment that America has one of its best actors, yet again, unrecognized with an Oscar. I am far from claiming that Nolte's performance in The Beautiful Country is worthy of an Oscar nomination but it is dangerously close to perfection. His worn-out body, his perfect imitation of a blind man used to loneliness, and a voice that reaches down to the very bottom of your souls have to be seen and heard to be believed. What an absolutely breath-taking acting which as far as I am concerned simply stole the film away from an otherwise solid Damien Ngyen!!

Films about immigrants and their struggle to reach the Promised Land (whatever the destination might be) are often filled with clichés and much glamorizing where after "hard work" success imminently arrives. Well, certainly this is not the case with The Beautiful Country and Bihn's odyssey to freedom. In fact, the more Bihn is trying to do the right thing, the more he works hard, the more desperate his situation becomes. It just comes to show that as it often happens in real life fate isn't fare to all of us.

Presented in its original aspect ratio of 2.35:1 and enhanced for widescreen TV's the image looks very good. Vivid tone colors, excellent degree of contrast, and lack of print damage should please the more demanding of viewers. The only tiny issue I have with the presentation is that occasionally I was able to spot a minor degree with edge enhancement which I could not help but think that it should have been handled a bit better. Other than that this is one solid looking disc.

Presented with a mix of Vietnamese and English 5.1 track film sounds rather well. The sound is crisp and clean, bass is deep, and the rear channels of your home theater will certainly be tested. Overall not a stunning audio presentation but without a doubt a good one.

Aside from a few trailers for upcoming Sony Pictures releases the disc offers a commentary with director Hans Peter Moland and a short interview with screenwriter Sabina Murray.

A great look at the immigrant experience The Beautiful Country offers plenty of food for thought. While some might have a hard time connecting with the main protagonist this is certainly a powerful story that avoids the typical clichés associated with these types of films. It is also worthy of pointing out that despite the rather small role Nick Nolte's performance is simply a marvel to behold. RECOMMENDED.