It seems that every generation has an artist who takes animation to the next level.  Cartoonist Windsor McCay showing how artful animation could be with his hand drawn shorts and set the standard of animation excellence for decades.  Walt Disney proved that animation can be used for more than comedy shorts and launched the feature length animated film.  In this generation Japanese director Hayao Miyazaki expands animation once again, creating gorgeous and wonderfully inventive movies that are enjoyed by both children and adults alike.  At the helm of such classics as Nausicaä of the Valley of Wind, My Neighbor Totoro, Kiki's Delivery Service, and Princess Mononoke, he has been responsible for some of the best animation to ever be filmed.  One of his best works was 2001's Spirited Away which won countless awards including the Academy Award for Best Animated Feature, and received accolades from both film critics and the general populace.  As amazing as it seems, his follow up feature, Howl's Moving Castle, is even better.  Though it's not yet available in region one, there is a region two edition of this fantastic film and it's well worth importing. 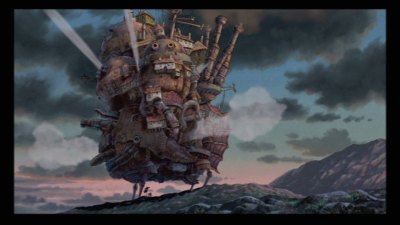 One of the few projects that Miyazaki has adapted from another's work, Howl's Moving Castle is based on a children's book by Welsh author Diana Wynne Jones.  That shouldn't scare you away though, Miyazaki infuses the story with his own imagination and creative spirit and creates a film that meshes well with the others that he's done.

The film centers around Sophie, a young lady who works in her mother's hat shop.  She's shy and not too confident in herself, but enjoys her work.  One day while walking home she is rescued from some drunken soldiers by a dashing young man, Howl.  He's being chased my some eerie creatures, and by association so is Sophie, but Howl manages to give them the slip with a bit of magic.  He takes Sophie home and bids her good day.

That evening though, someone enters Sophie's shop and demands to know where Howl is hiding.  It's the Witch of the Waste, and evil sorceress who wants nothing less than Howl's heart.  Sophie has no idea where the young man is, of course, so she is cursed.  The Witch turns Sophie into an old woman, and part of the curse is that she can't tell anyone she's under a spell. 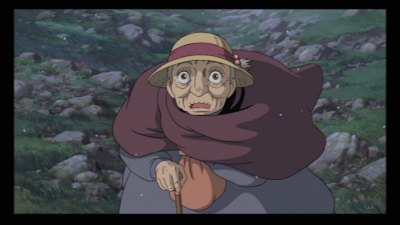 Determined to reverse the effect, old Sophie travels to the Wastes and runs into Howl's ambulatory castle.  She manages to hop on and climb in.  There she meets Calcipher, the fire demon who is bound to Howl be some contract or spell and runs the castle, Markl a young boy and Howl's apprentice, and eventually sees Howl again.  She inserts herself into their household as a maid and almost without realizing it falls in love with Howl.  But could a handsome and powerful magician like Howl ever love a wrinkled old hag like Sophie?

If I had to pick one adjective to describe this film it would be "astounding."  Not only are the visuals stunning, the opening scene with Howl's castle walking across the fog shrouded countryside is amazing, but the story is very well crafted too.  The story arc is well thought out, with each scene being interesting in its own way.  There wasn't any point in this two hour movie that I was bored or thought that the film was being padded.  Each scene seemed to be important or interesting.

Another aspect of the script is that it is very rich and full.  There are a lot of little details, such as the cause of the war that takes place in the film, that are thrown out so causally that many people will miss them, but have important consequences later on.  That gives the film a lot of replay value. 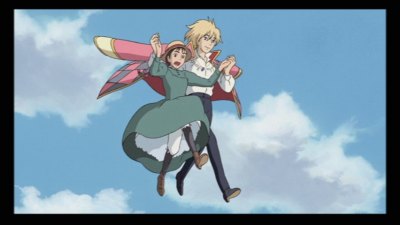 Miyazaki has often been called the Japanese Disney, but it's really not an accurate comparison.  Miyazaki has built upon the groundwork that Disney laid and his films are very different, both in style and content to Disney's films.  One of the biggest differences is characterization.  Disney cast his characters in fixed roles; the wicked witch was always bad, and Prince Charming was good and pure all the time.  Miyazaki doesn't lock his characters into such narrow (and unrealistic) stereotypes.  They flow and change as the movie progresses, and a handsome and virile young magician may turn out to have a vain streak or a monster hidden inside of him.  Or both.  The wicked witch may be a harmless old lady.  Not only does the main character progress and grow as a person, many of the supporting characters do to.  It's this ebb and flow that makes Miyazaki's films, this one in particular, so enjoyable for adults.

Though this was adapted from a children's book, I would have thought that Miyazaki wrote it if I didn't know better.  This film has all of the traits and plot elements that we've come to expect from a Miyazaki film.  It has a shy young girl who has to learn to rely on herself, amazing flights through the sky and a strong antiwar message. 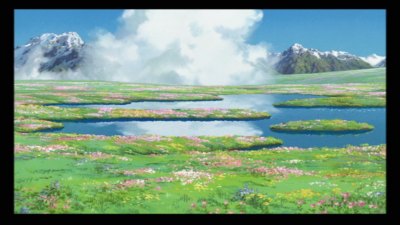 Like his other films, this one is achingly beautiful too.  It is filled with simply gorgeous landscapes, colorful and detailed backgrounds as well as unique and creative designs that will astound and impress even the most jaded viewers.  In this day of CGI special effects where just about anything you can think of can be put on screen in a realistic fashion, Hayao Miyazaki's cartoons continue to be very strong visually because he puts things on the screen that you can't imagine.  Howl's castle, the flying battle ships and even the Witch of the Waste herself are all interesting and unusual images that are unique to this film.

The only real complaint I have is that the ending of the movie is a little bit rushed.  The conclusion of the war, and Howl's problems that were associated with the conflict was wrapped up very quickly.   I would have been happy had the film lasted another half an hour, but I can see where that wouldn't have been practical.  I did enjoy that seemingly ambiguous ending.  It actually makes a lot of sense if you think about it, and was the perfect way to end a wonderful film.

This film comes on two DVDs with the feature on the first disc and the bonus material on the second.  The these are presented in a single width keepcase with an extra page for the second disc.  This is coded for Region 2, and the menus are all in Japanese, though this doesn't make it hard to navigate.

For a region 2 release, I was surprised to discover that this film has an English soundtrack in addition to the original Japanese.  Both of these are in DD 6.1 EX.  A third soundtrack is in French, but that one is only in stereo.  I viewed this in the original language (with English subs) but also watched extended scenes in English.  (I was only planning on only spot checking the dub but I discovered that once I started it, I wanted to watch most of the film again.)  The dub is excellent, with a lot of top talent giving their voices to the characters.  Billy Crystal plays Calcifer, Lauren Bacall voices the Witch of the Waste, and Christian Bale is Howl, among others.  The English voice talent did an all around wonderful job, they really managed to bring the characters to life.

The disc sounded very good.  Not only are the battle scenes impressive, but the more sedate parts of the movie also sound excellent.  The soundtrack doesn't collapse to a stereo mix after the action is over, there continues to be music and slight sound effects coming from all of the speakers.  The creaking sounds of Howl's castle as it moves across the countryside add a lot of the feel of the film, and the sounds of bugs and birds in Howl's private meadow also engulf the viewer.  I was very impressed with the way this disc sounded.  Of course, there are no audio defects.

The 1.78:1 widescreen image is anamorphically enhanced and also window-boxed, which I was a little surprised to see.  This means that there are black bars on both sides in addition to the bars on the top and bottom.  While this is a bit unusual, it does ensure that your are seeing the entire picture.  The presentation was first rate though.  The video quality was absolutely stellar.  Colors were bright and strong, the blacks were solid, and the lines were very sharp.  The level of detail in the dark shadow's of Howl's castle was excellent too.  On the digital side things looked equally impressive.  There wasn't a hint of aliasing, something that often plagues animation.  Banding, cross colorization, low level noise and other digital and compression artefacts were all absent.  A reference level disc. 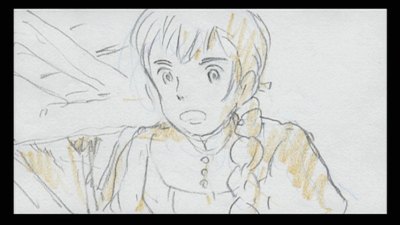 There are only a few bonus items and they are all included on the second disc.  The main extra is the entire movie presented in storyboard form.  There is a multi-angle feature that allows the viewer to switch to the finished product and back.  This was interesting, but I don't know that I'll ever watch this all the way through.  There are no subtitles or dub tracks on this version of the film.   Aside from that, the only other extra material are two sets of trailers for other Studio Ghibli productions.

Howl's Moving Castle is an intimate portrait of a young girl trapped in an old body who experiences her first love and a grand epic adventure at the same time.  Miyazaki has the rare ability to make a large scale film seem small and personal, and he uses that ability to great affect in this movie.  A vastly enjoyable film, this movie is also lovely to look at; the images and colors that are painted on the screen are simply beautiful.  I've enjoyed all of Miyazaki's films, but this one is his best yet and deserves to be in the DVD Talk Collector Series.