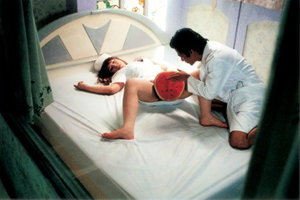 What really strikes as unusual in this award-wining feature is the uncanny degree of eroticism which fans of Tsai will find refreshing. There is an obvious intent in The Wayward Cloud to be as revealing as possible yet following this predominantly silent story of odd romance one is likely to experience what a Tarkovsky film would reveal- a universe of hidden messages. Unlike the works of the great Russian maestro, however, Tsai's film, I am convinced, will prove to be too indecent and perhaps too confusing for those unfamiliar with the creative aura of this unique Taiwanese director.

While watching the bizarre romance between Hsiao-Kang and Shiang-Chyi I could not stop thinking about Jacques Demy's The Umbrellas of Cherbourg (1964). Believe it or not if one could envision a modern take on the classic French musical retold with the wicked sense of composition which we have come to expect from David Lynch then I suppose The Wayward Cloud will be the logical result.

Co-produced by France and Taiwan The Wayward Cloud was originally intended as a "shocking biopic" in which a devastated grandmother follows her grandson through the slippery roads of the adult business. Due to some cast difficulties Tsai was forced to change the structure of the story and the film evolved into a musical with one of the most controversial final scenes I have seen in recent Asian productions. Regardless, The Wayward Cloud remains amongst the most daring and original films I saw last year proving that Ming-Liang Tsai is a force to be reckoned with.

The Official web-site of The Wayward Cloud and trailer could be found at: www.lasaveurdelapasteque.com

How Does the DVD Look?
Presented in its original aspect ratio of 1.85:1 and enhanced for widescreen TV's this Region 3 encoded DVD looks quite good. Aside from the few occasional soft spots visible in the opening scenes the image appears rather strong, with a good degree of detail, great contrast, and a tolerable degree of edge enhancement. The color scheme appears well-rendered (those with high-end set ups however are likely to notice some mild color bleeding) and by large the film print is free of damage or other distracting elements. Blown-out through a digital projector however The Wayward Cloud often reveals film grain which does not appear to be part of the film's composition. While not distracting its presence suggests that the image presentation could have been significantly better. Regardless, given the price tag provided for this release I am more than satisfied with the visual quality. The DVD is Region-3 encoded and NTSC.

How Does the DVD Sound?
I have some rather mixed feelings about the audio presentation on this R3 DVD. The only option we are given is a Dolby Digital 2.0 track which I am a bit disappointed with…HOWEVER, the good news is that the predominant amount of the film actually does not rely on any spoken lines (excluding the short musical scenes) which might be a good enough reason for most of you to consider this disc. With this said supposedly there is also a double R3 set which offers a 5.1 track which I have not seen and can not comment on. (I also suspect that in a near future there will be an elaborate French edition of this film which would offer plenty of extras and improved audio options as The Wayward Cloud was heavily promoted by the French film industry). In Mandarin with optional English and Chinese subtitles.

I would have loved it if this disc offered some substantial extras. I was enormously impressed with the visual beauty and edgy style of The Wayward Cloud and judging by the extreme reactions the film received at the Berlin Film Festival it would have been great to listen to Ming-Liang Tsai and the rest of the cast. Unfortunately the only extra material to be found on this DVD is a theatrical trailer, a photo gallery, and cast & crew information.

Bearing in mind that Ming-Liang Tsai and his works usually split audiences right down the middle I think that it is hard to recommend or dismiss The Wayward Cloud without warning viewers what they are about to experience. With this said, I found Ming-Liang Tsai's latest production to be beautiful, daring, and bursting with originality…something we see less and less in contemporary mainstream cinema. The musical acts, the decors, and performances were all of exceptionally high-quality. I am going to HIGHLY RECOMMEND this DVD release and hope that an elaborate double (why not a CD soundtrack included as well) DVD release will sooner or later emerge in either France or the UK so we could have access to as much of the Berlinale footage as possible.