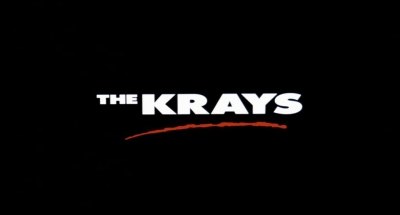 "You know what a glamour is? It's fear. I learnt that a long time ago. If people are afraid of you, you can just do anything. Glamour is fear."

The Movie:
Based on the fascinating true story of Ronald and Reginald Kray, identical twin brothers who rose up to become the most notorious British crime lords of the 1960s, Peter Medak's film The Krays sets itself apart from most other gangster movies by focusing more on the internal lives of the characters than on the superficial glamorization of violence. Starring real brothers Gary and Martin Kemp (lead singers of the band Spandau Ballet), the film is intriguing, stylish, compelling, and just a little bit frustrating.

Raised by a strong-willed but loving mother, who despite the strength of her personality managed to be completely oblivious to any faults in the little devils she'd spawned, the Kray brothers grew up in an environment always just a bit on the wrong side of the law and on the edge of violence. Their father an inveterate gambler continually dodging both the police and his debt-holders, and their grandfather a former boxer filled with wonderful tall tales about the dangers he'd seen in his life, the boys were strong, intelligent, crafty, and arrogant. They evolved from childhood bullies into smalltime thugs by forming their own protection racket through fear and intimidation of the local neighborhood. This led to the ownership of a series of nightclubs that put a legitimate face on their extra-legal activities, and eventually grew into bigger, more audacious crimes and even mob ties to the big organized crime families "across the pond". 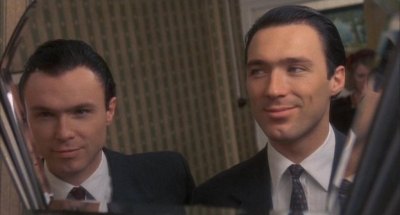 Despite being identical twins, the brothers had distinctly separate personalities. Reggie was the brains of the operation, calculating and perceptive but too easily drawn under by his brother's will. There was some potential that he might have been a better man if not for Ronald, who cared little for business matters and was legitimately psychotic. Prone to irrational rages and brutal violence, Ronnie was charismatic enough to lead others but too unstable to hold their organization together. An open homosexual while Reggie dated and even married a pretty young girl, Ronnie was intensely jealous of his brother's affections and wrongly channeled his own self-loathing into more and more aggressive behavior, including murder, until finally dragging Reggie into the same psychosis, reuniting their separate personalities into an indistinguishable joint identity.

Medak's film is superbly stylized but deliberately paced, more a character study than the kinetic or hyperviolent gangland tale it could have been. The movie has only one blazing shootout (with an amazingly beautiful transition to the following scene) and a fair bit of bloody retribution towards the end, but certainly there are more than enough juicy details in the real Krays' lives to support a sweeping epic of money and blood. The director and screenwriter/novelist Philip Ridley weren't so much interested in making that other type of movie, preferring instead to depict the personality conflicts of the characters and the way their actions and behaviors affected the people in their lives, primarily women. It's an interesting conceit, but you can't help feeling that movies like the Godfather series or Goodfellas managed the same thing while also delivering the big operatic thrills that this one shies away from.

Perhaps a slightly unfair criticism, but nonetheless a real disappointment, is finding out just how much of the story the film doesn't tell. The real Krays led lives that could fill the pages of dozens of pulpy potboilers, but the movie provides only a skimming overview of their exploits, and almost completely skips over the important (and damned fascinating) details of their downfall, just sort of ending with an, "Oh yeah, and then they wound up in prison" denouement. I understand that isn't the story the filmmakers wanted to tell, but it really feels like it should have been.

However, even if not entirely satisfying, The Krays is a bold, exciting film with enough spin on the old gangster formula to carve out its own place of honor in the genre.

The DVD:
Not yet available on DVD in Region 1, The Krays has been released by Universal as a 2-disc Special Edition in the UK. The discs are coded for Region 2 playback in the PAL video format and will require compatible equipment to operate. 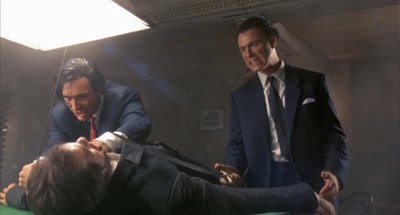 Video:
Presented in its theatrical 1.85:1 aspect ratio with anamorphic enhancement, the video transfer looks excellent overall. The only flaw of any consequence is some occasional speckling on the source elements. Otherwise, the image is sharp, detailed, and clear with no edge enhancement artifacts. Colors and flesh tones are rich and vibrant. Black level is solid yet has very good shadow detail, lending the picture quite a bit of depth. Fine object detail and textures are also excellent.

The digital compression quality is fine for the most part, but there are a couple of shots of the sky that look a little noisy and one foggy scene that doesn't come out very well. However, the picture otherwise looks quite splendid.

Audio:
The sound quality is much less impressive than the video, unfortunately. The Dolby 2.0 soundtrack is extremely flat, with no low end at all. The big shootouts have no kick to them. The 4% speedup inherent to the PAL format is not in itself too distracting in this case, but does contribute to the thinness of the audio.

Extras:
Universal has put together a nice little Special Edition for the film, with some cool animated menus in the layout of a tabloid newspaper and several informative bonus features.

Starting on Disc 1, we get an audio commentary by director Peter Medak with stars Gary and Martin Kemp. The track delves into the production history of the film as well as the true story of the Kray brothers. Surprising is the knowledge and passion for the topic displayed by the Kemps, who forego the usual actor commentary routine of telling funny anecdotes about the shoot; instead, they discuss their research for the roles and still show an authoritative knowledge of the subject.

A theatrical trailer in non-anamorphic letterbox is in very poor shape and was sourced from an old videotape. The trailer starts off really cheesy but gets a little better as it goes.

The hour-long documentary The Krays: Flesh and Blood appears to be a TV production from the early '90s. It mixes in some clips from the movie but is more substantive than the usual promotional fluff. It provides an overview of British gang history as well as a thorough look at the Krays themselves and goes into a lot more detail about the true story than the film does.

Even better is Disc 2, which is actually a repackaging of a prior DVD release for the 2-hour documentary titled The Krays: The Final Word. Featuring a death-bed interview from Reginald Kray himself, as well as several of his former "associates", the documentary is an extremely in-depth examination of the historical facts of the case. There is some repetition of information from the Flesh and Blood piece, but also a significant amount of new detail that shows the true story to be much more complicated than anything seen in Medak's movie. Kray was in bad shape when the interview was filmed and slurs most of his words in a thick Cockney accent, so the optional English subtitles frequently come in handy.

The Final Word DVD had its own small assortment of supplements, including bios for the people interviewed, an animated map of key locations, and a reprint of the Order of Service leaflet for Reggie Kray's funeral.

Final Thoughts:
The Krays is a good film just shy of greatness that is inexplicably absent from release on DVD in the United States. Universal's UK Special Edition fills that void for Region 2, however. The disc has a nice transfer and some terrifically informative supplements, and is recommended for region-free viewers.

Related Article:
Let Him Have It