Stop me when this begins to sound so familiar that your huge, gaping yawns drown out every television set in your house:

Half-man, half-demon dude goes around offing demons and laying the smackdown on possessed people who simply don't respect the bible. He's been raised by priests to fight for good, but he's also struggling with his own inner demons. (Weak pun intended.) Paired up with a chaste (yet inevitably sexy) young nun, our kinda-hero tangles with a boss demon who sweats a lot and rambles on and on to whichever undead minion happens to be within earshot.

That's Demon Hunter in a nutshell, one of the driest, dumbest, and most consistently derivative knock-offs since that E.T. rip-off about the alien who loved McDonalds. (You know the one I mean.) What could have been a mindlessly exciting b-level retread is instead a ponderously uneventful yawnfest laden with overwhelming amounts of lengthy exposition rants, circuitous backstories, and dialogue barrages that border on the unjustifiably painful. The action bits are fairly few and far between, but you'll know 'em when you see 'em, because you won't be able to help but notice that the main characters have somehow managed to stop yammering for 11 consecutive seconds.

Not only does Demon Hunter pilfer from four or five painfully obvious sources, but it doesn't even bother to take the borrowed foundations and build something semi-creative on top of it. It's all familiar themes, endless conversations, goofy FX work, oh, and a sweaty Billy Drago in a series of hotel room scenes in which he gropes a devil-woman with glue-on horns. If this flick were just a little more awful, it'd probably be hysterical. 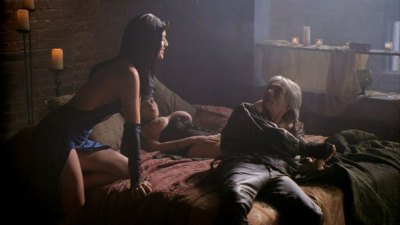 Screenwriter/stunt coordinator Mitch Gould and DTV hack Scott Ziehl* may go on to much bigger and better things, and I'll be here to give 'em a second shot when that happens, but what they've put together here is equal parts boring, silly, and downright stolen.

(*To be fair, Ziehl also directed Earth vs. the Spider, which is a perfectly, stupidly enjoyable b-movie, just so everyone knows I'm not just gunning for the little guys. He also did Cruel Intentions 3, which I somehow missed, and he's presently working on something called Road House 2: Last Call, which stars Jake Busey, Will Patton, William Ragsdale, and Johnathon Schaech, and which (no lie) I cannot wait to see.)

Video: It's a pretty solid anamorphic widescreen (1.77:1) transfer, with picture quality about as good as a low-budgeter like this one could reasonably expect.

First up is Demons Among Us, a 43-minute behind-the-scenes featurette in which the filmmakers describe this opus as a horror action thriller full of gritty sexuality, unsettling imagery, and mega-cool wire-work while I slowly shake my head in polite yet incredulous disbelief. Then again, they made the flick; obviously they like it. Also fairly hilarious is listening to the straight-faced Billy Drago as he discusses the finer points and subtler nuances of softcore sex sessions. Heehee.

There's also a feature-length audio commentary with screenwriter/stunt coordinator Mitch Gould and actor Nancy Yoon, but my patience only extends so far, people. Someone drop me an email and let me know if I've missed something special by passing over this particular chat-track.

Rounding out the platter is a 4-minute piece of fight sequence rehearsal and a bunch of trailers for Demon Hunter, Masters of Horror, Room 6 (which looks pretty cool, but I've been wrong before), It Waits, and The Fallen Ones.

A dreary and overly familiar DTV occult thriller is, of course, nothing new. But what's interesting here is that Demon Hunter was produced by Stephen J. Cannell, a name familiar to anyone who's seen The Rockford Files, The Greatest American Hero, The A-Team, Hunter, Riptide, 21 Jump Street, Wise Guy, or The Commish. These days Mr. Cannell is producing movies called Demon Hunter, The Tooth Fairy, and It Waits, two of which I've seen, both of which are destined for the $1.99 bin by the end of 2006. Hollywood's a nutty place.

Regarding Demon Hunter -- stolen plots, stupid stories, and silly monsters I can take, but there's no damn reason a 75-minute movie should feel like 275.