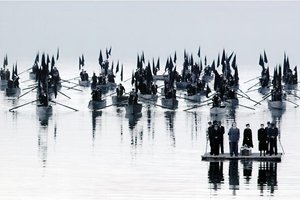 There is hardly another director in the annals of Modern Greek cinema as prolific and well-respected as Athens-native Theo Angelopoulos. Considered one of the last true European visionaries alongside Bernardo Bertolucci and Ingmar Bergman this remarkably gifted director is practically unknown in North America. Angelopoulos' work has been accessible mostly through overused and second-hand VHS relics often either dubbed or severely pan-scanned for the viewing (dis)pleasure of the few brave enough souls willing to seek out his films. Thanks to ambitious Greek-based label New Star the legacy of Theo Angelopoulos is now being rediscovered by film aficionados all over the world.

With Trilogia I: To Livadi pou dakryzei a.k.a Trilogy: The Weeping Meadow (2004), the first installment of an ambitious trilogy which is meant to cover the history of contemporary Greece, Theo Angelopoulos sends us back to early 1919 Thessaloniki where hundreds of Greek refugees arrive from Odessa. Amongst those forced away from their homes is Eleni (Alexandra Aidini), a young orphan, who has been traveling together with Spyros (Vassilis Kolovos),his wife Danae (Thalia Argiriou), and son Alexis.

Fast-forward almost twenty years later and Spyros's wife has passed away leaving the old man unsure about his future. Unwilling to spend the rest of his days alone Spyros has arranged to marry the beautiful Eleni. On the day of the wedding, however, Eleni runs away with Spyros' son Alexis (Nikos Poursadinis) leaving the old man behind. Following up a group of street musicians Eleni and Alexis will try to rebuild their lives in a country overshadowed by a newly established Fascist regime and a world on the brink of WW2.

Clocking in at nearly 3 hours this epic story of survival and friendship amidst political hysteria is absolutely staggering. The images of the arriving refugees shrouded in a sea of heavy fog have to be seen to be believed. Trilogy:The Weeping Meadow is indeed a difficult film to decipher whose visual beauty could be quite deceiving as the heavy symbolism which Theo Angelopoulos is known for certainly plays a major role in this film. The story is often fractured into little pieces which do not necessarily line up together forming a homogenous plot. Indeed, everything in Trilogy: The Weeping Meadow takes time to evolve requiring the viewer to be as focused as possible.

What truly separates Theo Angelopoulos and his film from just about everything else you have seen is the enormous visual power of his camera. The breathtaking vistas that Trilogy: The Weeping Meadow contains mixed with a sense of nostalgia which the always rainy Greek islands evoke are probably best comparable to a Tarkovsky film. There is something so mesmerizing in watching Angelopoulos build up his story…slowly, almost as if he wanted the film to be an intimate experiment, the Greek master wraps you in a sea of symbolism where attention to detail is paramount.

Do not expect everything in Trilogy: The Weeping Meadow to be meticulously explained and consequently justified. There are many scenes that remain confrontational to what "common logic" might suggest. In a fashion similar to the one his ancient ancestors were known for Theo Angelopoulos' film relies on myth as much as it relies on reality. As a result you will notice that quite often Trilogy: The Weeping Meadow takes in a direction that is rather unexpected.

In addition to a spellbinding visual composition Trilogy: The Weeping Meadow also offers a hypnotic soundtrack which is in my opinion the core foundation for this film. The use of bouzouki, santouri, clarinet, and accordion creates an environment which you are unlikely to find in conventional European cinema. The ethnic feel of Mediterranean Greece which Trilogy: The Weeping Meadow recreates is astounding. 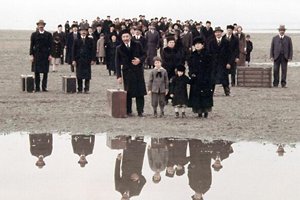 Such thematically complicated yet utterly rewarding productions as Theo Angelopoulos' Trilogy: The Weeping Meadow are certainly quite uncommon nowadays. The visual style, the manner in which the story is structured, the often misleading symbolism, which Angelopoulos' film reveals are all aspects that other contemporary directors typically shy away from. Indeed, when style and substance are mixed to perfection as it is the case with Trilogy: The Weeping Meadow the results are impressive.

In 2004 Trilogy: The Weeping Meadow was nominated for Golden Bear at the Berlin International Film Festival. During the same year the film was the winner of the FIPRESCI Award for Best Director (Theo Angelopoulos) granted by the European Film Academy.

Digitally restored from the original film elements and personally supervised and approved by Theo Angelopoulos this new print of the Trilogy: The Weeping Meadow presents the film in its original aspect ratio of 1.78:1 enhanced for widescreen TV's. The results are absolutely staggering. Considering the fact that Theo Angelopoulos has been a firm opponent of the home video format(s) (and who could blame him, his Cannes award winning picture Eternity and a Day has truly been bastardized) what Greek-based label New Star have delivered is simply quite stunning: crystal clear, progressive, print which is as good as this film will ever look. Great contrast, excellent degree of detail, tight to the frame image, and an impeccably clean print transform this DVD presentation into the best I have seen an Angelopoulos film look. Either someone at New Star is a great fan of the director and went after every little detail that you could think of and took care of it or, Theo Angelopoulos is one uncompromisingly demanding director who knows what his films must look like on DVD. The DVD is encoded R2-PAL.

Presented with its original Greek language track this new DVD print offers an elaborate 5.1 track which is not present on the Artificial Eye disc. As it was the case with the video presentation the audio files must have undergone some very, very serious restoration work as everything provided is in a near perfect condition. Sharp, crystal clear, and with a great ambience soundtrack transforms this film into an unforgettable experience. Music is essential for Theo Angelopoulos' films and I am happy to report that what this Greek disc delivers is of the highest possible quality. With optional white French and English subtitles.

As I understand Theo Angelopoulos is always hesitant to speak about his work and therefore there isn't much that DVD producers could include in their releases of his films. Though there is a large interview with the director in French on the Artificial Eye disc this Greek release offers only the theatrical trailer to the film.

Enormously popular in Italy and France Greek director Theo Angelopoulos and his work are often shrouded in secrecy. His films rely on heavy symbolism revealing an enormously visual director with an uncanny sense for composition. Despite of the directors' massive success at Cannes, Berlin, and Venice his films are simply persona-non grata in America. The few available are of criminal quality. This new collection of Angelopoulos films (Trilogy…being one of three films that were released in January of 2006) provided by newcomer Greek-based distributor New Star, which as I understand will release all of the directors' films restored from the original film elements, is absolutely marvelous. If you consider yourself a serious film buff Theo Angelopoulos' work belongs in your collection. HIGHLY RECOMMENDED.