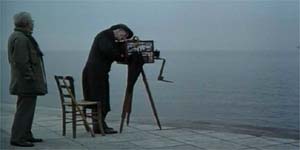 If there is anything that serious "film critics" like about Theo Angelopoulos' Ulysses' Gaze (1995) it is the fact that this was indeed the film that gave them plenty of opportunities to question the Greek director's nobility. In 1995 during the Cannes Film Festival Angelopoulos certainly made sure that the jury members were well aware of his feelings regarding the fact the he was denied the coveted Palm d'Or (fellow Balkan director Emir Kusturica had the honor). Immediately those who had anything negative to say about the Greek director but never had the courage to make it public rolled up sleeves and began questioning his "artistic integrity". As a result Ulysses' Gaze gained an ill-fated reputation for being a long, pretentious, and boring artistic feature almost impossible to endure in a single viewing.

Back home in America critics also did a great deal of head-scratching over Angelopoulos' decision to have no other than Harvey Keitel as the main protagonist in Ulysses' Gaze. There was some confusion as to why the visionary director had opted for an actor who certainly did not possess the colorful Balkan mentality his character was supposed to reveal. Some saw the inclusion of Keitel as one of the film's major flaws disrupting the rhythm of an already difficult to endure picture. In addition, his rough attempts in Greek (large portions of the film are indeed spoken in Greek) left some viewers unsure whether or not Keitel was the right person for the job.

Enough with the "concerns"…now let's see if this film was indeed as bad as many wanted it to be.

As it is the case with many of Theo Angelopoulos' films Ulysses' Gaze is an extremely complex work with plenty of symbolism and hidden messages that one is likely to fully grasp only after a meticulous second viewing. So, not surprisingly the opening to Ulysses' Gaze is a rather vague one-we are introduced to a well known film director from Greek origin who we only come to know as "A" (Harvey Keitel). In fact, the little that we are given pertains mainly to A's past as we learn that he has been living in exile in America and is now back in Greece to attend a special screening of his latest film. The true reason behind A's visit to Greece, however, is a lost reel of documentary footage (considered to be the first film shot on the Balkans by the notorious Manakia brothers) which he plans to track down. As Keitel's character is slowly making his way through Greece, Bulgaria, Albania, Serbia and Romania searching for the lost reel he will also relive a fraction of his past.

Ulysses' Gaze is indeed a film that is difficult to analyze. It is a deeply emotional experience which if you happen to be a native of the Balkan region will resonate with you in a manner I can relate only to a few other films I have seen in my lifetime. Yet, the different cultures shown on the screen, the foreign feel of a land where everything seems to be functioning according to an absurd set of rules, and the struggle of a visiting film director to reconnect with his home country make this film an acquired taste. At least that is how Ulysses' Gaze was greeted in America.

In reality however Ulysses' Gaze is as powerful and impressive a film as you will ever see. Its ambitious narrative combining just about every single language spoken on the Balkans reveals a director unafraid to challenge its viewers. More importantly the social dissection which Angelopoulos delivers while his main protagonist travels through the region proves that he is at ease with the current socio-political environment in all of the countries depicted in this film. Indeed, such universal vision is a rare commodity with modern directors who more often than not treat their audiences as if they are mentally challenged.

There is absolutely no doubt in me that Ulysses' Gaze is one of the best films of the 90s where surrealism, perfection, and creativity have transformed a single idea from a man with a camera to an unparalleled cinematic achievement. And though I find its favorable depiction of Greeks and their past history a tad offensive when compared to the suffering of the rest of the Balkan nations shown in this film Theo Angelopoulos' Ulysses' Gaze is still an invaluable look at Europe's most volatile region.

Presented in its original aspect ratio of 1:78:1 and enhanced for widescreen TV's this newly restored print for Ulysses' Gaze was personally supervised and approved by Theo Angelopoulos. Progressive, anamorphic, with an excellent degree of detail, tight to the frame, and with a virtually perfect contrast Ulysses' Gaze looks absolutely stunning. The image quality is as good as the one seen on Trilogy: The Weeping Meadow. The only issue that I have with the print is that a few times I spotted a few very tiny dust dots (that were only seen in the beginning) but they hardly even affect the overall very impressive quality of this DVD. Furthermore, having seen the R1 disc of Ulysses' Gaze I can assure you that the color scheme in this R2 release is as solid as it could be. I can hardly spot any digital manipulation and if not for the above mentioned dust dots I would rank this print right next to Trilogy: The Weeping Meadow.

I am not familiar with the restoration team working on this new collection of Angelopoulos' films (though I did do some research on the Greek site announced in this DVD) but I have to say that I am very, very impressed. As Greek distributor NEW STAR have already announced that all of Angelopoulos' films will be digitally restored from the original film negatives and released in Europe I could hardly even wait. If the rest of the films stated for release will look as good as Ulysses' Gaze and Trilogy: The Weeping Meadow serious film buffs are in for some remarkable treats!! Region 2, PAL encoded.

Presented with its original English language track (with portions of Bulgarian, Greek, Romanian, Serbian, and Albanian) in Dolby Digital Surround Ulysses' Gaze sounds great!! Once again, it is quite obvious that the Greek distributors have performed some serious restoration work as the audio is crisp and very enjoyable to listen. Those of you already familiar with the film are certainly well-aware of the excellent soundtrack and this DVD presentation serves the music perfectly. With optional Greek, French, and English subtitles.

Unfortunately other than the theatrical trailer there is nothing else on this Greek produced DVD. The beautiful artwork on the inside of the case more than makes up for it though.

I will restrain from commenting any further on Ulysses' Gaze as I believe that I already made my opinion about Angelopoulos' film quite clear. What I would like to reiterate here is the great work which Greek distrib NEW STAR have performed. I CAN NOT wait for their next batch of Angelopoulos' titles to arrive. MAKE IT HAPPEN SOON!! Highly recommended!!