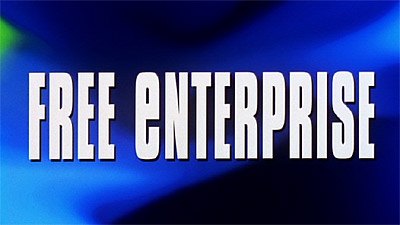 
The Story So Far...
A geek-focused flick, Free Enterprise was released on DVD by Pioneer, way back in 1999, in what was, at the time, a pretty packed special edition. Time has not been kind to the status of this platter, but DVDTalk has a review here.

The Movie
I am writing this review following a weekend spent among the unwashed masses, otherwise known as the attendees at a comic book convention. Thus, my tolerance for people who put a high personal value on sci-fi and fantasy is at a low point. Admittedly, I spent many years as a fan boy, and still enjoy many of the superheroic stories out there, as seen by my reviews of movies like Batman Begins, but I have struck my own personal balance between reality and make-believe. There are many out there who haven't, and for them, watching Free Enterprise is like looking into a mirror. A mirror that has a lot more sex.

The story follows a pair of "Star Trek" geeks named Rob (Rafer Weigel) and Mark (Eric McCormack, "Will & Grace"), whose lives are defined by a love of the show and the hero, Captain Kirk, otherwise known as Willim Shatner. Even their jobs are geeky, as one edits a genre magazine and the other edits low-budget schlock films. Despite that fact, they are rather successful with the ladies, until their geek flags fly, and they sabotage everything. If you had a gorgeous naked actress/model in your bed, would you be arguing about comic books? Rob would.

Their world is rocked when one night they meet their idol in a bookstore, and find out he's more screwed-up than them. But they are still huge fans of Shatner, and in their enthusiasm, they somehow become part of the actor's plans to make a film musical of "Julius Caesar." Along the way, they explore their sci-fi mindsets, from home theaters to action figures to laserdiscs to midnight movies. And yet somehow, Rob meets Claire (Audie England), a beautiful sexy woman he runs into in a comic shop, begins a wonderful relationship, and risks ruining it with his geekery, much to the chagrin of his friends. 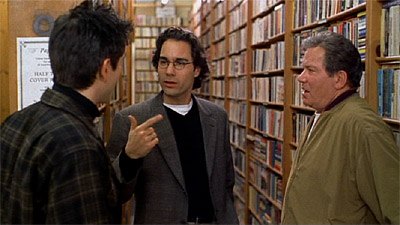 The bizarre reality of this film is made obviously clear in what is otherwise a rather introspective scene between Rob and Claire, as they discuss their relationship. Rob's geeky personality shines through, causing a rift, that culminates in what can only be described as one of the more unbelievable ending beats seen in a movie. Yet here, it makes perfect, if twisted sense. Thus is the effectiveness of the film and it's embracing of the subculture.

McCormack is good in his Spock-like role as a brutally honest and rather rude Trekkie, and Weigel does well as his sci-fi fanboy buddy, but Shatner in his limited appearances, simply steals the film. His anti-Kirk is just the kind of performance he needed in order to make a John Travolta/"Pulp Fiction" return to the spotlight that continues today in "Boston Legal." Toning down the bombast he is known for, he becomes overwhelmingly human and likeable. It would be hard not to call him "Bill" after watching him here.

This new extended version brings some of the deleted scenes from the first disc into the fold, and is introduced by a Star Wars-esque crawl. Included in this new cut in a pitch by Mark to Rob's boss at the beginning, a bit from Shatner's talk about Caesar, parts near the Claire/Rob hillside moment and the "Logan's Run" segment. They don't add that much to the movie, but they aren't horribly out of place either.

By no means is Free Enterprise a technically perfect movie. In fact, some parts fall flat on their faces, including the ending of the film, which comes suddenly, out of nowhere. But the film is certainly enjoyable, like a Mallrats with heart, and features one of the best roles ever played by Shatner. It's certainly more entertaining to someone with a working knowledge of sci-fi, but if there's one thing universal in this universe, it's Shatner and the idea that one day, we all have to grow up, at least a bit. But now, we can still keep our toys...or rather "collectibles." 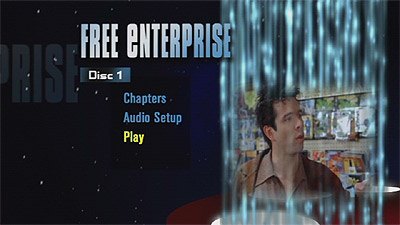 The DVDs
Free Enterprise is presented on two DVDs, which are packaged in a standard-width keepcase with a foil-coated slipcover and a 20-page booklet. The first disc has an anamorphic, animated main menu with choices including play, select scenes and adjust audio. While the scene-selection menus have still previews and titles for each chapter, there are no subtitle options, but the audio is available in English Dolby Digital 5.1 and 2.0, with closed captioning.

The Quality
The video quality is much improved in this release, most notably in the fact that it now has an anamorphic widescreen transfer. The video is much sharper than it previously was, with excellent color and detail. The special effects have been redone for this release, and look nice, making for an ultimately pleasing set of visuals. There's not a speck of dirt or damage in this Divimax transfer, and grain is at a minimum.

The audio has also been pumped up, with a Dolby Digital 5.1 track, and the difference can be heard often, despite this being mostly a dialogue-driven comedy. Music is enhanced in the surrounds, and some slight sound effects find their way to the sides and rear. The dialogue is consistently clear, and the mix is solid and non-distracting, resulting in a well-produced sound track.

The Extras
The extras kick off with a pair of newly-recorded audio commentaries. The first one features writers Mark Altman and Robert Burnett, who did a commentary on the original disc as well. Here it's essentially an update, as they used their earned distance from the production to reflect on the film. Burnett throws in lots of technical info, to go with on-set details, reference notes and bits about the inspiration for the film, creating a very well-rounded track.

The second track brings Burnett together with McCormack and Weigel, while Shatner's comments are edited in. Shatner is rather low-key in his comments, which lean toward looking at his craft, while the Burnett trio has more fun, cracking jokes amid their stories. The Burnett parts are more entertaining, but I could listen to Shatner talk forever, though here, he's somewhat limited in quantity. For fun, heck out how Shatner's complete lack of knowledge of the enemy (a.k.a Star Wars) is evident from the beginning.

On Disc Two, the extras continue, beginning with the 70-minute behind-the-scenes documentary "Where No Fan Has Gone Before - Making Free Enterprise", which was found on the first disc. It still holds up well, with lots of on-set interviews, still photos and production footage.

The documentary is followed by approximately 26 minutes of deleted scenes, which unfortunately don't include a play-all option. These were longer on the first release, but some were edited back into this extended cut of the film. There are some decent moments here, but the film is long as it is. There are also eight minutes of screentests with Russell Young, Jennifer Sommerfield, Annika Brinbly, Marilyn Kentz, Amanda Ingber and Audie England. These are always more interesting with the people who didn't get the role, but there is a humorous test featuring the driving-while-diving scene.

New to this set is "Cafe Fantastique," a pilot episode for a "Dinner for Five" type show about sci-fi and related pop culture, starring Burnett and pals. It might have worked on The Sci-Fi Channel, but it's still pretty geeky, like getting stuck with the Four Horsemen of the Comic Book Shop, in the midst of an argument. Despite that, it's interesting to check out, like all pilots heretofore unseen.

Missing from the first set is the gag reel and subtitle track that explained the pop culture references, though the glossary is found in the included 20-page booklet, which also has liner notes from Altman and Burnett. Trailers for Free Enterprise and The Specials and Enterprise's TV commercial, along with Shatner's ridiculous "No Tears for Caesar" music video, carried over from the original disc, help complete the DVD package. Pop the disc into a DVD-ROM drive, and you can access to drafts of the film's script, along with an excerpt from the final version.

On the Hunt...
There are a few easter eggs on disc two, which reveal a deleted scene and an interview clip. They aren't hidden too well, so you should be able to stumble onto them. 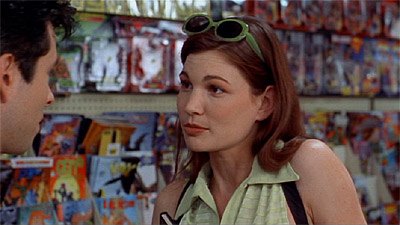 The Bottom Line
As someone who has been a major comic-book fan and who enjoys the geekier genres on a base level, this movie has quite a bit of cringe factor to it. It's as if I'm watching home movies of my days working in a comic shop, dealing with people who value acid-free backing boards as much as friendships. As a result, if you don't know people like these, the film is bound to feel very foreign and artificial. But if you can suspend disbelief, the film will reward you with a great performance by Shatner and a love letter to geek culture.

The DVD presentation is very good, with improved technical aspects and a few welcomed new extras to bump up the quality of the package, so if you're think about upgrading, you should do so. Anyone who has attended a comic convention willingly and without irony, or went without something important in order to buy a DVD or toy will enjoy this movie, though you don't have to know the difference between starships to get a kick out of Free Enterprise. Sure, it speaks to a specific audience, but that audience is served well.