In post-war Italy Maddalena Cecconi (Anna Magnani) lives an uneventful life often shattered by the degrading abuse of her husband Spartaco (Gastone Renzelli). Looking to escape her miserable existence Maddalena is obsessed with transforming her daughter Maria (Tina Apicella) into a successful movie star. She hopes that with the money which young Maria will earn her life will also change for the better. Determined to make her dream a reality Maddalena will have to endure pretentious ballet teachers, insincere industry execs, and the suspicious looks of her neighbors. 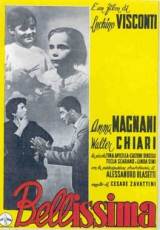 Considered the "odd child" of the great Luchino Visconti Bellissima was completed in 1951 at a time when Anna Magnani was arguably at her best. Indeed, the film marks an unusual shift in Visconti's creative philosophy as the social disparagement behind Bellissima seems unusually strong. There is a harsh criticism, veiled with the typical for Visconti humor, directed at Italian culture and its tolerance for corruption, poverty, and female abuse.

Unlike Visconti's Ossesione (1943) and Giorni di Gloria (1945) and especially the commissioned by the Communist Party La Terra Trema (1948) where the narratives seem to be built around a larger social context Bellissima is more of an intimate exploration of a woman and her hopes for a better life. The great Anna Magnani is simply stunning as the ambitious and somewhat hurt housewife ready to sacrifice her family in order to materialize a powerful dream. Her actions are often tragic-comedic and the situations that she puts herself into amusing.

Behind all the laughs and edgy dialogs, however, Bellissima reveals a side of Visconti that will years later transform him into a legend. His ability to surround the main protagonist(s) with characters that naturally enhance his/her presence, an approach that Visconti will heavily rely on in his Il Gattopardo (1963), is impressive. Take for example the scene in Bellissima where Anna Magnani awaits the film committee to announce the results from the preliminary auditions. Look at her eyes, now look at the way she moves, and focus at the nervousness she reveals. Now listen to the film operator addressing Maddalena's daughter and explaining that a possible "career" in the entertainment industry is likely to be accompanied with bitter disappointments. The sea of emotions which we witness on the face of Anna Magnani is breathtaking- there is doubt, there is hope, there is anger. Indeed, I have hardly seen a more convincing "mother" revealing so much about her character simply by doing all the little things right. Impressive!

While the storyline of Bellissima is largely predictable the finesse which Magnani provides through her acting visibly changes the complexion of this beautiful film. Her ability to switch comedy with drama in a matter of seconds allows Bellissima to consistently surprise its viewers even though they might feel that the film is heading into a familiar direction. In addition Magnani's contagious southern temperament brings that typical for Italian cinema from the early 1950s sense of melodrama that we have come to appreciate from the films of Pietro Germi, Mauro Bolognini, Piero Ballerini, and Giuseppe De Santis. What a spectacle!

While recognizing the remarkable performance by Anna Magnani and the manner in which she transforms Bellissima into a great film one also must admit that the success which Visconti achieved would have never been possible without the young Tina Apicella playing the character of Maria Cecconi. There really is very little that I can do to justly describe to you how incredibly good the little girl is. You will have to see her "screen test" at Cinecitta after Magnani storms in utterly upset and demands an apology from the film director. The "honest" tears which Tina Apicella has in her eyes mixed with the outrageously entertaining crying are classic. Visconti must have spent countless hours looking for the right girl to take the role and a simple glance at Bellissima proves that he chose the right one.

Thirty years have passed since Luchino Visconti's last film L'Innocente (1976) saw the light of day. Visconti is now gone, many of the actors that graced his films are gone, and so is the Golden Era of Italian cinema. Yet, cinephiles around the world still talk about the legacy of films this imaginative director left behind. Controversial, delicate, extremely passionate the films of the Maestro will remain Italy's priceless gift to those who treasure classic cinema.

In 1952 Bellissima won the Silver Ribbon for Best Actress (Anna Magnani) granted by the Italian National Syndicate of Film Journalists.

Courtesy of Italian distrib MEDUSA this new digitally restored print of Bellissima is a product of the same team that delivered the magnificent edition of Fellini's La Dolce Vita part of the Italian CINEMA FOREVER series. The results as you might easily guess are stunning!! The print for Visconti's Bellissima offers an excellent degree of contrast, impressive deep colors, and virtually no print damage that I can be upset with (the restoration effort is so strong that even during opening and closing credits I hardly felt unsatisfied with the results). The image is tight, progressive, and with an impeccable degree of detail. Indeed, you could easily see that the production team behind this release not only knew what they were going after but perhaps went the extra mile (or two) to make sure that Bellissima looks even more impressive than MEDUSA's release of La Dolce Vita.
With all of this said, allow me to go on record here and state that I will be shocked if anyone anywhere in the world came up with a better transfer for this film. Why? I do not think it is possible. The Italian team working on Bellissima did a small miracle with it and I think that what you get with this DVD is the best possible quality that a production company can deliver. Presented in its original aspect ratio of 1.33:1, Region 2, PAL encoded.

Offered with its original Italian Mono track and a more elaborate 5.1 Italian mix Bellissima certainly is one impressive package. There seems to be some extensive restoration work being performed on the audio track as well and I can confirm that there are no hissings or annoying cracks to detract from your viewing experience. With this said, I listened to both the original Mono track and this new 5.1 mix and certainly would like to recommend that you stay with the Mono track. I find it more pleasing and most definitely matching more accurately the spirit of the film.
The film offers optional (white) Italian, English and Spanish subtitles that are in the proper size (unlike the enormous R1 subtitles recently we have been getting) for a classic film. The English translation is very well done and more importantly syntax is handled properly. Extremely well done work indeed that will satisfy even the most demanding English-speaking viewers.

The MEDUSA disc offers a variety of extras that are not subtitled in English (the only sub-option is Italian). Below is a list with all of the extras in Italian:

A spectacular film presented to us in a spectacular manner! Despite the lack of English subtitles for the extra features I feel compelled to grant this excellent DVD package the highest mark DVDTALK allows: DVDTALK Collector Series!