24 Hours In The Life Of A Woman 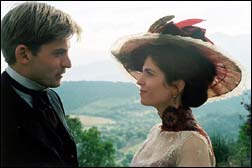 Those familiar with Austrian writer Stefan Zweig and his novel 24 Hours in the Life of a Woman will find plenty to admire in Laurent Bouhnik's latest adaptation of this classic story which was originally shot for a certain French TV network. The story is indeed quite complicated as it follows the unusual confession of a retired ambassador (Michel Serrault) who has arrived at the French Riviera looking for piece and solace. While gambling at one of the posh local casinos Louis becomes involved in an unfortunate brawl that leaves the stunningly beautiful Olivia (Berenice Bejo) in his shaky hands. Olivia and Louis will quickly establish an unusual bond that will ease the old ambassador in revealing a secret that has been tormenting his soul for years.

A period piece set in contemporary France and early 19th century Europe 24 heures de la vie d'une femme is a film that offers an unusual and highly entertaining narrative. The director of the film, Laurent Bouhnik, has chosen to have not one, not two, but three separate stories told simultaneously and surprisingly they all work exceptionally well. The first story is indeed set at the French Riviera where Michel Serrault's character encounters the nineteen years old Olivia. Shortly after, Bouhnik transports us in the beginning of the century where we see young Louis undergoing a major crisis while being silently seduced by the charm and aristocratic manners of a much older woman (a stunningly beautiful Agnes Jaoui). Louis is visibly shattered by his mother's affair with an Italian man who has been serving his family as a tennis instructor. At the same time in an attempt to explain the actions of Louis's mother Agnes Jaoui's character will take us on another journey recalling her unfortunate affair with a Polish soldier she befriended while visiting a famous casino.

24 heures de la vie d'une femme is certainly a film where style meets a great dose of substance. I was quite surprised to read some of the extremely negative reviews the film received from French journalists and to be honest with you having seen Bouhnik's work three times I believe that it is certainly a most rewarding experience. The budget that was provided for this TV adaptation of Zweig's novel is without a doubt allowing for plenty of detail which especially during the second part of the film is rather exceptional. The posh casino on the French Riviera, the stunningly beautiful dresses that Agnes Jaoui wears, the Italian-style villa where Bouhnik sets his final story, everything in 24 heures de la vie d'une femme has been given a great deal of attention.

Aside from the impressive camera work 24 heures de la vie d'une femme also offers a very interesting structure for its narrative where three different stories are being intertwined providing an unusual charm to this film. I was surprised to read that many saw this as an approach diminishing the appeal of the film since all of the flashbacks involving Louis' character had quite the opposite effect on me. I loved the fact that the story was not a one-dimensional journey to a sugary happy ending where the viewer is put to sleep with a big smile on his/her face. On the opposite Bouhnik's film adaptation of Zweig's book most certainly defies the general concept of "made-for-TV" product.

There are two reasons why I enjoyed this film and strongly recommend that you consider it for your library. First of all, it is the excellent cinematography that reveals a side from the French Riviera one is almost impossible to disregard. As far as I am concerned the beautiful beaches, impressive decors, and a stunningly beautiful Agnes Jaoui are not to be missed. Second of all, this is a great romantic story told in three chapters--an older man and a younger woman find themselves attracted to each other yet they are unsure why; an older woman revealing to a younger man that love could be very disappointing; and a young couple faced with a difficult decision which is soon to determine their fate--it is the classic circle of love, with all of its glamour, with all of its drama…splendid!!

In 2002 "24 heures de la vie d'une femme" was nominated with a Golden Rose at the Sochi International Film Festival, Russia.

I was a little nervous to approach this R3 release and for a long time did not give it a chance even though it is the only English-friendly one you would find on the market. To my surprise Universe have provided a very good, if not excellent, transfer that seems to be flagged properly. The film is presented in its original aspect ratio of 1.85:1 and it is being enhanced for widescreen TVs (yes, 1.85:1 is indeed the ratio which the director approved for this film while it was being shown at festivals around the world). Colors appear well saturated, detail is well handled, and for the most part contrast appears in good condition. My only complain is that as it has been the case with some previous Universe releases sometimes a soft spot will appear here and there forcing me to ponder exactly what process the mastering company is using to transfer film to DVD. A few such instances were noticeable on this release. That put aside however this is one very good looking print.

Unlike the French set of 24 heures de la vie d'une femme an elaborate DTS track has been provided the only audio option we are offered on this R3 release is a French 2.0 mix with optional (small, white) English and Chinese subs. I certainly did not notice any flaws with the audio mix--there were no drop outs, hissing, or cracks—but I feel a tiny bit disappointed that a 5.1 track was no provided. With this said, if having a 2.0 track means a great picture quality (I am reading into the mind of the distribs at Universe) then it is all fine by me. With this said, the English subtitles are very well done without any grammatical mistakes and the syntax appears to have been handled in an immaculate manner.

Unfortunately the only extra material found on this DVD is a gallery of stills from the main feature. Not quite disappointing indeed as even the French disc offers only a trailer and filmographies for the cast. With other words, this is an "acceptable" presentation.

I thought that this film will never show up in R1 land, I really did. And so far our distributors have proven my prediction correct. Fortunately, R3 distrib Universe have provided this film with a deserving treatment that will warm up the hearts of non-French speaking Agnes Jaoui fans around the world. As to the film…color me biased, I adore period romantic stories! Recommended!