Reviewer's Note: This DVD is a Region 2 release and will only be compatible with players that support region-free playback. Please be sure that your player supports this feature before buying or renting this disc.

Though the drama outweighs the action by a large margin, Shimoyama Ten's Shinobi: Heart Under Blade (2005) will likely be remembered for the latter. Based on the popular manga Basilisk (and, in turn, the original story by Yamada Fuutarou), Shinobi, like most film adaptations, opts for a stripped-down story rather than a literal translation of the source material. Unfortunately, Shinobi often struggles to keep the momentum going despite its excellent production values, impressive atmosphere and a lean running time. Similar in style to popular imports like House of Flying Daggers, Shinobi doesn't hit all the marks but still isn't a terrible way to spend 100 minutes.

Essentially a ninja-centric version of Romeo and Juliet, Shinobi centers around the rival Iga and Koga clans…and, of course, a man and woman from each side who fall hopelessly in love. Unfortunately, their love for each other can't be kept secret for long, especially once the Shogun organizes a tournament pitting both clans against one another. Here's the problem, though: the emotional relationship of the main characters, though promising at first, eventually falls flat as the story progresses. Essentially, we're expected to believe that they're "destined to be together" and leave it at that. Had the film tightened the focus and depth of the young lovers' relationship, this problem wouldn't be as noticeable; instead, Shinobi seems comfortable with being a romance-driven story where we never really get to know our main characters despite spending a bit of time with them.

The supporting characters (as well as the respective performances) are generally larger than life, so most fans of comic books and anime should have no trouble making the adjustment. Infrequent but stylish action sequences help get things back on track, but we're ultimately left with a film that's either a bloated short story or half of an epic. To be fair, though, the computer-generated effects are often striking despite their lack of polish, while the film's atmosphere acts as a mild adhesive that holds things together for a while. Even so, this is a film that may feel impressive the first time around, but you probably won't appreciate it as much after repeat viewings. Had Shinobi played its cards right, it would've been quite a potent experience.

There's good news and bad news on the DVD front: this basic package from YesAsia boasts an excellent technical presentation…and not much else, really. The limited Premium Edition may catch the eyes of Shinobi fans, though they'll be in for a bad case of sticker shock. Unfortunately, there's no Region 1 release date in sight, so die-hard fans of the film will have to shell at least $30 for the bare minimum provided here. Let's take a closer look, shall we?

Presented in its original 2.35:1 aspect ratio and enhanced for widescreen displays, Shinobi looks very good from start to finish. A few of the darker scenes are a bit on the muddy side, but everything else looks excellent: the color palette is muted but accurate, the image detail is generally high and digital problems (edge enhancement, etc.) don't seem to be an issue. In all honesty, Shinobi one of the most visually impressive Region 2 releases I've seen on DVD.

Presented in your choice of original Japanese 5.1 or 2.0 mixes (with optional English or Japanese subtitles), Shinobi's audio treatment is just as impressive as the video, if not more so. There's plenty of directional activity---and your subwoofer should get a workout---but the dialogue still comes through clean and clear, never fighting for attention. Even better, the optional white subtitles are easy to read, timed well and free from major typographical errors. 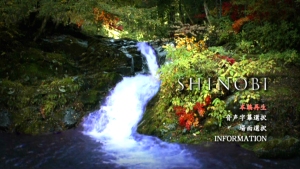 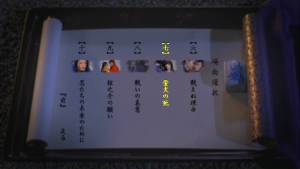 The menu designs (seen above) are simple and elegant, if not slightly generic. While those not fluent in Japanese may have trouble with the navigation at first, it should be easy enough to figure out---just remember, the chapter listing (above right) reads from right to left. This 97-minute film has been divided into just under a dozen chapters, while no apparent layer change was detected during playback. This one-disc release is housed in a standard black keepcase with striking cover artwork and a handful of text-based inserts, printed mostly in Japanese.

Bonus Features:
Sadly, no extras are included here (save for some text-based film information presented in Japanese), though an expensive four-disc Premium Edition of Shinobi is available separately. A director's commentary or a few cast/crew interviews may have cleared up a few of the film's uneven moments; unfortunately, those who don't have $100 to spare are out of luck.
Final Thoughts

At best, Shinobi is a relatively familiar story told with plenty of style and visual flair. The DVD's technical presentation makes the most of these benefits, combining a crisp transfer with a dynamic, impressive audio mix. Unfortunately, the high price tag on this release (just over $30 for this regular edition, and triple that for the Premium) will likely keep this film out of most permanent collections, and rightly so: it's a decent effort, but it may not hold up to repeat viewings as much as you'd think. Ultimately, though, Shinobi may still be worth a weekend look for its impressive visuals---at least more than the mildly engaging story that supports them. Rent It.