Europe is on the verge of political chaos. Mister Freedom (John Abbey) has been sent to Paris by the powerful Freedom Inc. to resolve a complicated dilemma: the fast-spreading red menace. Operating out of Switzerland the Red Chinaman and his posse have established a base camp deep into the underground system of Paris. There the Reds have created a union of some sort with the mysterious Russian Moujik Man (Philippe Noiret) who as it seems has its gang operating inside the city as well.

Troubled by Moujik Man, Red Chinaman, and their growing influence in Paris Dr. Freedom (Donald Pleasence), the owner of the powerful Freedom Inc, orders Mister Freedom to use all means necessary to squash the Reds. But…it is easier said than done! Upon arrival in Paris Mister Freedom is greeted less than enthusiastically by the locals and it appears that his supporters are not as impressed by his pathetic speeches as they should be. Visibly upset and with the clock ticking Mister Freedom decides to bomb France and save the rest of Europe from the hands of the Reds. 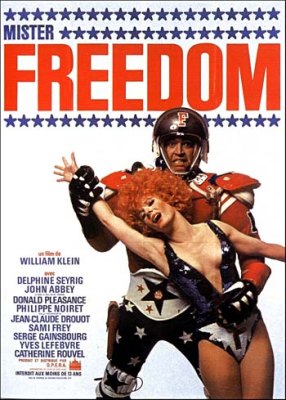 After relocating to Paris in 1947 American expatriate William Klein quickly built an impressive reputation for being one of the most eccentric filmmakers to ever cross the big pond. His ultra avant-garde films filled with subtle symbolism and flashy camera work proved a winning formula which both critics and filmgoers seemed to enjoy quite a bit. In fact, to this day Klein's 1966 extravaganza Qui êtes-vous, Polly Maggoo? a.k.a Who Are You Polly Maggoo? remains one of the most exciting documentaries about fashion and its strange reincarnations I have ever seen captured on film. It was Klein's harsh criticism of the American society and its macho foreign policy, however, that gained him the cult status he currently enjoys.

Mister Freedom, a film that appeared right after Klein's highly-controversial Jean-Luc Godard-supervised project Loin du Vietnam a.k.a Far From Vietnam (1967), hardly fits any of the typical for its time cinema categorizations. Somewhat inspired by the likes of Batman and Superman the uncharacteristically vile Mister Freedom veers off in a direction that is rather shocking. Clad in a weird costume resembling an alien with plastic covers all over his head, arms, and shoulders, and a gun meant for his enemies Mister Freedom can be described as the ultimate anti-hero. In fact, all of the characters in this film (including the mysterious Red Chinaman who appears to be half-lizard-half-human being of some sort) look as if they have been taken straight out of a terrible acid-dream which the mind of David Cronenberg would produce.

But there is nothing hallucinatory about the message(s) this film strives to deliver. Instead of being a man of honor Mister Freedom kicks little Asian men left and right, he forces the beautiful women around him into "making love", and "speaks" with his gun where necessary. Occasionally Mister Freedom would also grab his crotch and make an indecent gesture to those who happen to disagree with his passionate speeches. Indeed, all of the anti- mentality this film is built upon speaks loud and clear.

I must admit that prior to receiving this lovely disc by Arte Video my only exposure to William Klein's work was a dusty VHS copy of Qui êtes-vous, Polly Maggoo? which unfortunately was dubbed in English. Now, having seen Mister Freedom I am absolutely stunned!! I wish I would have been able to attend a theatrical screening of this most unusual film. But how could have I? This film lashes out American politics in such fierce manner that I will be shocked if an American company would ever step up and actually acquire its distrtibution rights.

Having described the premise of Mister Freedom to you I think that there are two ways you could view this film. You could ignore all of the hidden propaganda and enjoy the vile anti-hero Mister Freedom is or, you could sit back and read between the lines. Regardless of your preference I think that this ultra avant-garde film has plenty to offer and you would end up liking its weirdness quite a bit. Indeed, this is one wickedly-funny trip to a world where the term bizarre simply does not exist.

Mister Freedom has been produced in a manner similar to the one employed by French powerhouse MK2 in their presentation of La Double Vie de Veronique. English speakers will be delighted to find out that the entire menu system as well as credits, supplements, and production notes can be had through an English interface (for the record the disc offers both French and English interfaces).
Furthermore, allow me to point out that in a very uncharacteristic for French distributors Arte manner Mister Freedom's DVD release is not encoded in PAL but NTSC. The disc is also encoded Region 0 which means that you won't need a region-free player to be able to enjoy the vile attitude of this anti-hero. Mister Freedom is also presented in its original aspect ratio of 1.66:1 and has been enhanced for widescreen TV's. The print is in exceptionally good condition as colors are rich and lush, contrast is of exceptionally high quality, and there is hardly any edge enhancement that I could spot. Occasionally you would notice some grain but by no means is the image quality "soft". If anything, this is precisely how the film was shot and I would assume that the restoration that has been performed by the French producers reveals how the film looked in the theaters. Now…with all of this said, there is something that I must point out to you: about 20 min. into the film right after Mister Freedom arrives in Paris there is a tiny white line that appeared on the screen for little over a minute. At first I did not notice it as I was so captivated by the story but then I saw it and I think that you should be aware of it. As far as I am concerned this must have been a major issue with the print yet the restoration team has been able to take care of about 95% of it. The results are pretty good as initially I could not even tell that a small scratch was there. All in all I would not hesitate to give this presentation my highest recommendation. Believe me it is worth every penny!

Presented with its original English mono track Mister Freedom sounds spectacular! The audio is crisp and clear and dialog is very easy to follow. I did not notice any audio dropouts or obnoxious cracks. With optional French subtitles for those who might need them.

There is an extensive gallery of DVD releases courtesy of Arte Video.

What a bizarre film! I loved every bit of it! Despite of the propaganda (some may find this film utterly offensive) and at times rather dry humor Mister Freedom is one exceptionally well made picture! The anti-hero image works quite well. Quite frankly I can not wait to dig into the splendid double DVD set of Qui êtes-vous, Polly Maggoo? HIGHLY RECOMMENDED!