Fists in the Pocket - Criterion Collection

Young Alessandro (Lou Castel) spends most of his time plotting how to get rid of his blind and truly obnoxious mother, his mentally-ill brother, and a sister he could never trust. Filled with anger, tortured by frustration, but dedicated to be a man whose word counts Alessandro decides to quit fantasizing and take matters into his own hands.

A film whose deconstruction of Italian society, morality, and the lowest of human emotions, created so much havoc that for a long time critics and audiences could not agree on it I Pugni in Tasca a.k.a Fists in the Pocket (1965) catapulted young Marco Bellocchio right to the top. The film, a disturbing look at a young epileptic who has been treated as an outcast his entire life, certainly went a step further compared to what Italian cinema was producing at the time. With its cold and often brutal narrative I Pugni in Tasca abandoned the sweet spirit of Italian melodrama and replaced it with a style that quickly established Bellocchio as a force amongst Italian directors. 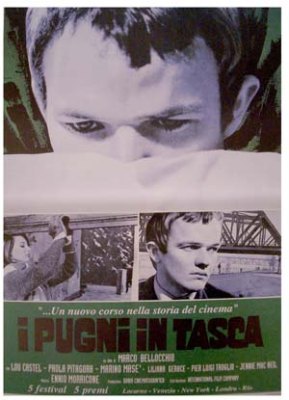 Assisted by the steady hand of cinematographer Alberto Marrama and the deceivingly sweet soundtrack of legendary Ennio Morricone I Pugni in Tasca revealed some quite unusual filming techniques – the abrupt tempo switches, a narrative contradicted by the music score, and characters whose unpredictability was as shocking as the film's focus on detail transformed Bellocchio's first feature-length work into a stunning debut. The sheer force that I Pugni in Tasca revealed to this day is considered by many scholars as the Italian director's best work, unmatched by anything he created in the following years.

Much of the success which the film gathered was also a product of the bold criticism directed at the Italian social ordinance and the Catholic Church in particular. The long, and openly suggestive, monologs which Alessandro will often recite were charged with anger (one that Bellocchio will once again channel through his L'Ora Di Religione a.k.a The Religion Hour) that most certainly placed religion in quite a discomforting environment. From Alessandro's impure thoughts during a family funeral to his self-confessions charged with odium I Pugni in Tasca was an unexpected slap in the face of Italian moralists.

Unlike the films of Bernardo Bertolucci, however, where frustration and anger were used within the context of revolutionary action I Pugni in Tasca remained more of an intimate attempt, a film whose message was not to be used for political demagogy. Yet, the criticism which Bellocchio unleashed towards the Catholic Church earned the film plenty of detestation from religious officials. Nevertheless in 1965 the jury at the Locarno Film Festival granted I Pugni in Tasca the Silver Sail Award recognizing the enormous talent Bellocchio showcased and the powerful message his film carried.

Forty one years after its premiere I Pugni in Tasca still remains a film trapped in its own success. While times have changed, the Italian state has most certainly learned from its past, and the Catholic Church is not as demanding from the Italian society as it used to be, the tone of Bellocchio's film remains as sharp and as provocative as it once was perceived to be. There is plenty in I Pugni in Tasca that will leave a bitter taste in the mouths of those who attempt to analyze it and rightfully so. The frustration which a talented young director was once able to flawlessly capture on film negative needs very little rationalization – to this day the character that would launch Lou Castel's acting career remains one of the most powerful and genuinely upsetting protagonists I have seen in Italian cinema. I Pugni in Tasca truly is amongst the best of its kind, a film that long after we're gone people will recall.

Presented in its original aspect ratio of 1.85:1 and enhanced for widescreen TV's I Pugni in Tasca offers everything we have come to expect from Criterion: a near perfect degree of detail, clean progressive transfer, exceptionally good color scheme (very, very impressive blacks), an image composition tight to the frame, a remarkably well-restored print, virtually no edge enhancement that one might be unhappy with. Above all however Criterion have delivered a magnificent print that never breaks down when blown out through a digital projector, quite the contrary in fact, the picture quality remains as convincing as one would want it to be. Indeed, this is a near flawless presentation that hardly needs any further description: excellent!

Presented with its original Italian Mono track and optional (white) subtitles the audio presentation once again matches perfectly the superb video presentation. I truly enjoyed listening to Ennio Morricone's soundtrack and both the dialog and music seem to be perfectly restored: there is hardly anything that I could think of that was not of excellent quality. Great!!

I Pugni in Tasca appears as one of the less-spectacular Criterion packages where we have the film and all of the extras on a single disc as opposed to the more elaborate double sets we have come to expect from the R1 distrib. Unfortunately even though there are some quite interesting extras on this DVD it most certainly feels as if the film could have gotten more in terms of supplemental material. The following extras are present:

"A Need for Change"- a newly recorded documentary (shot exclusively for the Criterion collection in 2005) where Marco Bellocchio, Lou Castel, Paola Pitagora, editor Silvio Agosti, and critic Tullio Kezich recall the early history of I Pugni in Tasca. The entire documentary is structured as a series of interviews where each participant comments on the history of the film.

"Interview with Bernardo Bertolucci"- a magnificent interview which the famous maestro recorded specifically for the Criterion collection in 2005. Bertolucci goes into great detail discussing I Pugni in Tasca (entirely in English) while also drawing parallels with his notorious Before the Revolution. From politics and religions to the place I Pugni in Tasca occupies amongst Italian films from the period Bertolucci provides a most unique look at Bellocchio and his work.

Last but not least there is the theatrical trailer for I Pugni in Tasca.

Together with Pietro Germi and Francesco Rosi, Marco Bellocchio is indeed one of the most misrepresented on DVD (Italian) directors in North America. Finally I Pugni in Tasca has been given a treatment that truly does justice to this amazing film. This is an essential film that anyone interested in Classic Italian cinema should own in his/her collections: HIGHLY RECOMMENDED.