Some say it was the Airport flicks that kick-started the "all-star disaster" genre, but the death-laden spectacle epics that I know and love begin and end with one name ... and it ain't Arthur Hailey. 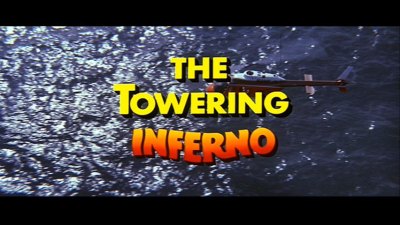 Irwin Allen struck upon a goldmine when he bought the rights to a book called The Poseidon Adventure and turned it into a big, sweaty hulk of a movie. The flick turned out to be a huge hit, with audiences if not necessarily with critics, and it even earned an impressive eight Oscar noms. (It won only one, though; Best Song)

Immediately after his sea-faring success, Allen leaped upon a new concept ... but it turned out that the book he so desperately wanted to buy was already owned by Warners. So, like any canny producer with a lot of chutzpah, Allen found himself a paperback with the exact same plot, bought the screen rights, and walked into Warner Bros. to say "Hey, let's make this movie together instead of competing over the concept."

So "The Glass Inferno" and "The Tower" were handed over to Poseidon screenwriter Stirling Silliphant along with one piece of instruction: Turn these two novels into one big screenplay. And the rest is disaster movie history. 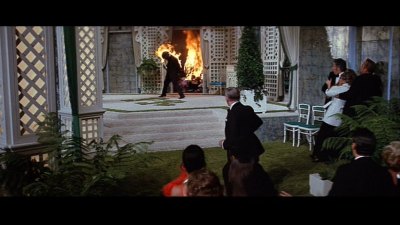 The Towering Inferno furthered the template that Allen laid down with Poseidon: Take a bunch of very famous actors, jam 'em into a spot where death and danger lurk around every turn, dole out just enough melodrama to keep the characters interesting, and be sure to casually kill a few characters whenever the action got a little limp. And for a few movies, this formula worked like a grade-A charm. (To see the other end of the spectrum, one need only rent Allen's later epics The Swarm and When Time Ran Out. 'Painfully bad' doesn't begin to describe 'em.)

In at least one area of filmmaking, Irwin Allen liked to keep things simple, and that one area was ... plot. The Poseidon Adventure was "folks try to escape from a capsized ocean liner," while The Towering Inferno was even easier: "Folks try to escape from a burning skyscraper." Clearly the movie fans weren't going to the disaster flicks for their Machiavellian plot machinations ... but nobody could accuse Irwin Allen of being stingy with the goods. Those who bought a $4.00 ticket to The Towering Inferno absolutely got their money's worth.

So who's trapped inside the penthouse of the world's newest, tallest, and shiniest skyscraper -- while a massive fire rages down on the 81st floor? We've got a heroic fire chief (Steve McQueen), the conflicted architect and his semi-estranged girlfriend (Paul Newman & Faye Dunaway), a lovable old grifter (Fred Astaire), a guilt-ridden construction tycoon (William Holden), his frustrated daughter (Susan Blakely), and his sniveling son-in-law (Richard Chamberlain). Throw in a mayor (Jack Collins), a senator (Robert Vaughn), a cheat (Robert Wagner), and a widow (Jennifer Jones), and you've got an eclectic enough mix to start throwing a few of 'em off a roof.

But for all its spectacle and pyrotechnical magic, its the actors and the characters that make the Inferno one of the (very few) greats of the disaster genre. For all its shallow dialogue and predictable plot-twists, The Towering Inferno still delivers a whole lot of bank for the buck, and it's not just the explosions that keep fans coming back. Heck, how often do you get to see Steve McQueen, Paul Newman, William Holden, and Faye Dunaway in the same scene? Plus the flick's got two or three of the most memorable 'surprise demises' ever tossed onto a screen. (Jennifer Jones' final scene always creeps me out, and Chamberlain's is a whole lot of fun.) 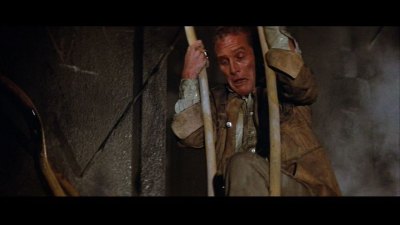 For pure big-budget disaster-time spectacle, the short list begins (and basically ends) with The Poseidon Adventure and The Towering Inferno. They're time-capsule genre classics that just never get old.

Video: It's an anamorphic widescreen (2.35:1) transfer, and I have to say: the picture quality is pretty darn excellent. Far and away the best I've ever seen it look, anyway. Colors are crisp and clean, the flames look bright and dangerous, and even the backgrounds look surprisingly fresh. Bottom Line: It's an excellent transfer, and one that should definitely please the fans.

Audio: English (Dolby Digital 5.1, 2.0, or 4.0), French (2.0 Stereo), or Spanish (Mono). Audio quality is also quite impressive, with a nice balance between clearly audible dialogue and not-too-loud explosiveness. Optional subtitles are available in English and Spanish.

Fox kicks some serious tail with this release, disaster fans!

On disc 1 you'll find an excellent feature-length audio commentary with film historian / L.A. Weekly movie critc F.X. Feeney. The guy rambles amiably and very informatively throughout all 160 minutes of the flick's running time, and he focuses on everything from the cast to the FX to the controversies, stopping occasionally to point out something clever about the film's editing style or production design. Basically, this is one of the best 'historian tracks' I've heard in the past few years. Great, great stuff.

You'll also find some scene-specific commentary with X-Men FX director Mike Vezina, who shares his thoughts on eight different sequences from the film. Up next is The Day After Tomorrow stunt coordinator Branko Racki, who chimes in one nine separate sequences from The Towering Inferno. (Nifty idea, I suppose, to have present-day FX experts share their thoughts on some of the old-school pyrotechnics. Your own mileage may vary.)

Under the Featurettes heading you'll find the following new goodies:

Innovating Tower: The SPFX of an Inferno (6:50) -- This one focuses on the staggering number of practical FX that were used to bring the Inferno to cinematic life. Interviewees include FX technician Mike Vezina, cineamtographer Fred Koenekamp, production illustrator Joseph Musso, and actress Susan Flannery, with some archival segments from Irwin Allen himself.

The Art of Towering (5:14) -- Production illustrators Nikita Knatz, Dan Goozee & Joseph Musso explain how strongly Irwin Allen relied upon pre-production storyboards, even going so far as to get his actors' precise likenesses into the artwork.

Directing the Inferno (4:24) -- Breaks down the ways in which Allen directed the action, while the much more refined John Guillerman handled the "plot stuff." Flannery, Blakely, Koenekamp, Vaughn, and Musso pop back in for interviews.

Putting Out Fire (4:53) -- The difficulties in filming a big fire ... while keeping everyone safe. Koenekamp, Lucarelli, and Flannery show up again.

Running on Fire (5:46) -- Stuntpersons Lightning Bear, Jeannie Epper, and Ernie Orsatti, along with Chamberlain, Vaughn, and Lucarelli, discuss the elaborate stuntwork required for the film. 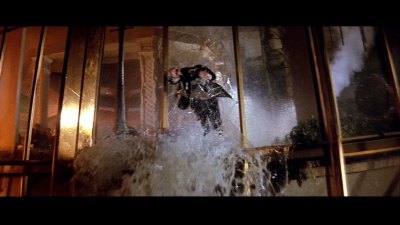 Still the World's Tallest Building (8:18) -- Architect Roger Chikhani compares the world's four tallest buildings to "The Glass Tower" - and it seems that the fictional skyscraper would still hold the record!

Vintage Promotional Material is where you'll find all sort of Towering tidbits: a goofy NATO Presentation Reel (11:05) in which Allen promises a bunch of movies that never happened, a pair of original 1974 featurettes (8:09 & 7:15), a 1977 Irwin Allen Interview (12:17), the original teaser and theatrical trailer, and a bonus trailer for The Poseidon Adventure.

Also included is a big collection of 34 extended and deleted scenes. What's most interesting is that nearly all of these scenes had been part of The Towering Inferno when it played on network TV, so you old-school fans may remember some of this footage.

In the Galleries section you'll find a whole bunch of shot compositions, publicity material, behind the scenes photos, conceptual sketches, and costume designs.

A stellar transfer, a generous array of supplemental riches, and one of the most sinfully entertaining disaster flicks ever made. Call me nuts if you like, but this superlative Fox release earns our DVD Collector's Series designation ... and so does the Poseidon Adventure SE.

Fox continues to do right by their biggest and best old movies, and I cannot imagine the Inferno fan who will not adore this 2-disc treat.