The Fuccons is a unique commodity among Japanese imports. It's not really anime, but it's also not like any other regular program. The Fuccons is a collection of live-action comedy skits filmed with mannequins. The main characters are an American family living in Japan: married couple James and Barbara Fuccon and their son Mikey. Mikey attends the American school in town, and most of the people we meet are from there. This includes Emily, the prettiest girl in class, and Bob, the children's strange teacher who insists on speaking in a whisper that is then repeated and amplified by his ever-present mother. Mikey also has a nemesis in the form of his cousin Laura, the sort of attractive blonde whose pleasant smile hides nastier motivations. 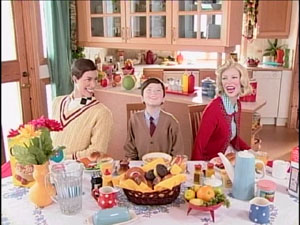 The idea behind The Fuccons (or, as it's known in Japan, OH! Mikey) is pretty simple: Americans are bright, cheery, and dense. They speak in gregarious tones and laugh a lot, all the while grinning stupidly. Keep in mind, these are mannequins, and to call them animated would be an overstatement. While their bodies do change poses, it is always done off camera, and movement is limited to uncomplicated actions, such as Mikey going down a slide in a playground. This means that the Fuccons always have the same expression on their faces, regardless of the words they say. Dad has a wide smile like a used car salesman, Mom looks as if she is frozen in the middle of a guffaw, and Mikey's head is raised in perpetual bliss. We're not talking subtle satire here, but hammer-on-the-head comedy reminiscent of the cheaper techniques of Trey Parker and Matt Stone.

So, the question becomes, is it funny? Yes...but maybe not as funny as it should be. ADV goes out of its way to warn viewers on both the box and the opening screens of the DVD that The Fuccons "will probably offend some of your sensibilities" and does not reflect the opinions of the company. This could be a mistake, setting the audience up for mean-spirited humor that never comes. Is The Fuccons a less-than-gentle elbow in the ribs of America? Not really. There is very little mention of the family's nationality, and if the Fuccons are meant to reflect the nation as a whole, it's merely an America that exists on sitcoms. Frankly, I think we could stand a much stronger skewering than this. I'm only offended that the Japanese filmmakers didn't try harder.

The Fuccons is much better when viewed not as a political send-up, but for how absurd it is. On this initial disc, we get seventeen episodes originally aired on a Japanese television variety show, and from the multiple fade outs, my guess is they were run like the original Simpsons shorts on the old Tracey Ullman Show: chopped into short segments scattered throughout the program. The introductory episodes are a little flat, but as the situations the Fuccons are put in get more outlandish, the funnier the show becomes. Highlights include episodes where Dad decides to structure his family like a corporation and nearly gets made redundant from his job as father, Mikey has to strip down to his tighty whities to rescue Laura and Emily from drowning, and when Mom and Dad try to trick their son into drinking his milk by staging a fake robbery. The characters from outside the family unit bring a little extra comedy. A tough punk with a penchant for chewing gum spices up one episode, and Mikey's sexy tutor gives Mom and Dad palpitations in another. By the end, we also meet the senile paternal grandparents who pretty much forget one sentence as soon as they start another.

Clocking in at under an hour, the DVD gets some genuine laughs before wearing out its welcome, but The Fuccons is going to have to step up its shock quotient to keep the series from losing its already strained novelty. 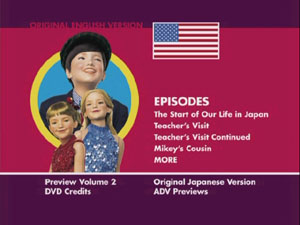 Video:
Originally shot for television, The Fuccons is presented in a full screen format. The day-glo pink of the DVD packaging is a good indicator of what the program looks like. Everything is bright and colorful with lots of solid colors. The picture is especially crisp. I wish more television with real people looked this good.


Sound:
The Fuccons is presented in both the original Japanese language with easy to follow subtitles and a brand-new English dub. Both sport a 2.0 mix that's as bright and loud as the smiles on the mannequins' faces, making their group laugh as shrill and obnoxious as it should be. Having sampled both language tracks, I have to say I prefer the Japanese, as the delivery ups the absurdity level, whereas the Americanized track goes for the broader strokes, falling more into the cliché of what grinning Americans are expected to sound like. It almost seems too easy when heard in our native tongue.

Both options are accessed separately through the main menu on the disc. The DVD initially loads up on the English menu, and it's easy to navigate to the other side. You cannot, however, toggle between tracks while watching the episodes. The one you chose is the one you'll stay in until you backtrack to the menu.

Extras:
The only extra included on The Fuccons is a trailer for the second volume. It is presented in English only, and it's narrated by a pair of British twins that will be introduced to the series on the next DVD. I actually laughed out loud at their back-and-forth, so it brings me hope that The Fuccons will get funnier as it goes.

It's disappointing that there is nothing on the DVD about the story behind The Fuccons. I chose this disc for review simply because it looked so strange. A little explanation about why the creators took the route they did would have been welcome.

Final Thoughts
The Fuccons is a generally amusing diversion for an evening, and not much more. I am not sure how often I will actually watch the disc again, outside of the brag factor I can get for introducing friends to something so bizarre. It certainly isn't the type of comedy that is going to grow deeper and funnier on repeat viewings, I pretty much got what I was supposed to on the initial spin. As a result, I can only recommend that you Rent It. 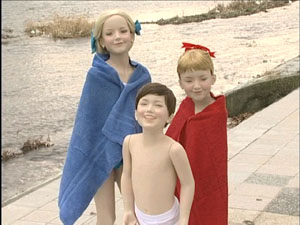