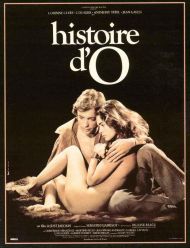 The original poster for the French film release of The Story of O
A semi-documentary feature attempting to shed plenty of light on the person behind the controversial sadomasochistic novel The Story of O which was published in the summer of 1954 in Paris The Writer of O is a film that some will find fascinating while other will regard as boring and pretentious. For the most part I tend to side with the second group. Here's why:

Structured as a collage of interviews, literary readings, and filmed scenes recreating specific episodes from The Story of O Pola Rapaport's work is mainly concerned with already well-known facts about the identity of the person responsible for the famous erotic novel. Dominique Aury, whose literary pseudonym Pauline Réage was for a long time a name people would argue belongs to a man, came out of the shadows she has been hiding back in 1994 when she revelaed that not a man but indeed a woman was the author of the scandalous novel. The Writer of O goes back to the days when Paris and the rest of the world where shocked to discover that the explicit writings of a woman who had captivated the hearts and minds of many with her fantasies is actually a well-spoken, rather quiet person, who anything but fit the image many had created during the years.

As expected Pola Rapaport's film The Writer of O attempts to reveal as much of Dominique Aury's persona as possible by relying on plenty of interviews with colleagues, notable writers, and people who were one way or another involved with the lady. While doing so the documentary also tends to infuse plenty of episodes from The Story of O (not direct scenes but "filmed" extracts) which are played by actors with very little inhibition. Unfortunately the most successful segment of this film, the precious archive footage with Dominique Aury, is scattered throughout the film creating a sea of chatter more often than not attempting to be provocative through themes that are anything but.

The biggest disappointment in Pola Rapaport's feature however comes from the literary readings (narrated in English) which are dry and utterly unconvincing. The manner in which extracts from the book are being offered to the viewer is quite puzzling as the person reading them seems to be completely out of touch with the emotions Dominique Aury was attempting to channel. As a result the female reciting the original texts sounds almost uncomfortable with her task, rushed, and at the end very unconvincing.

The story behind the famous sadomasochistic novel which now has a true name attached to it is indeed fascinating. Following the havoc a simple book created, both at home and overseas, is perplexing. But the approach Pola Rapaport has chosen to present her findings leaves plenty to be desired. Not because the archive material, the interviews, and the rest of the supplemental information provided is not worthy of our attention, no, let's be clear about it, it is the construction and execution of this feature that are rather disappointing. Was it really necessary to embellish the story of Dominique Aury by staging questionable scenes from the book?

Presented in an aspect ratio of 1.78:1 and enhanced for widescreen TV's the image quality in this release understandably varies. From the archive footage and interviews to the actual material shot by Pola Rapaport the quality is good if not great. We see some very minor damage on the older interviews and satisfying image quality on the newer footage. Contrast and detail are mostly fine, where one could expect them to be, and the rest of the presentation is tolerable. I spotted some minor "combing" which implies that ZeitGeist Films have relied on the print used by Arte-France but indeed the issues with this presentation are manageable.

Presented with a Dolby Digital audio track which offers both French and English (as they are spoken throughout the film) the presentation is very good. Most certainly I did not hear any issues that might prevent you from enjoying this documentary. There are no pop-ups or sudden audio-dropouts and I am perfectly satisfied with the results. With optional English subtitles where needed.

I am going to g on record here and claim that the extra materials provided are in fact much more valuable than the actual documentary. Certainly they provide more that I wanted to hear in contrast with the often cheap and sugary extra scenes provided in the main feature.

First of all there is a great section of additional footage with writer John De St. Jorre who revealed the true identity of the creator behind The Story of O (from the notorious now 1994 New Yorker article). It appears that what the film has managed to leave on the cutting floor was in fact quite interesting, certainly as far as I am concerned, and John De St. Jorre had plenty to say. I strongly recommend that you take a look at this segment.

Next, there are linear notes by John De St. Jorre which attempt to shed additional light to the subject discussed in this documentary. Next, there is a short section with Dominique Aury's biography. We are also offered the original theatrical trailer to the film as well as a short statement from Pola Rapaport in which she explains the reasoning behind her project.

The Writer of O will serve as a great addition to your The Story of O film(s). I suspect that this is one of the main reasons why ZeitGeis Films have now made this documentary available on the market. If you however are yet to read the book (I would assume that this is why consequently you saw the film and not the other way around) I would suggest that first you spend some time with Dominique Aury's work and then explore whatever else is out there. The Writer of O by all means should come at the very end after you have experienced all the book has to offer and the "scandalous" scenes the film unveiled. RENT IT.