Rescue Me - The Complete Second Season 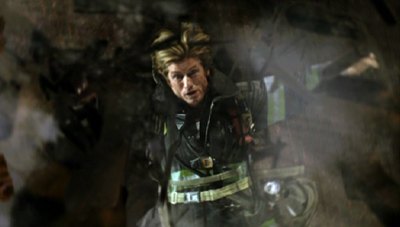 Smoldering with anger, confusion, regret and chaos, the FX original series Rescue Me has delved deep into the muddled human psyche over the course of two short seasons. (Review of season 1, Season three begins later this month.) The brainchild of star Denis Leary and co-creator Peter Tolan, Rescue Me is not the ER of firefighters. Taking the extra freedom of cable as license to work in courser language and material, the show's scripts run rampant with shocking twists and deviant behavior. And while it sometimes feels overstuffed with ideas (sometimes to a ludicrous degree) there is a tremendous amount of disturbing and moving character and story development.

Focusing largely on the life of veteran FDNY smoke-eater Tommy Gavin (Leary) Rescue Me is a portrait of psychosis and addiction. Like his network neighbor The Shield's Vic Mackey, Gavin is not at all a typical television hero. Capable of both heartbreaking insight and unthinkable cruelty, Gavin is a walking time-bomb, visibly coming apart at the seams throughout the show. But what makes Gavin special is his tremendous sense of magnetism. Leary calls on every ounce of his formidable comic talents to turn his complex character into one of television's richest portraits. Gavin's emotions twist and turn in the wind when the rest of the world leaves him hanging, but Leary doesn't go for easy sympathy. Gavin's tremendous self-loathing is clear on his face, but so is his monumental ego. 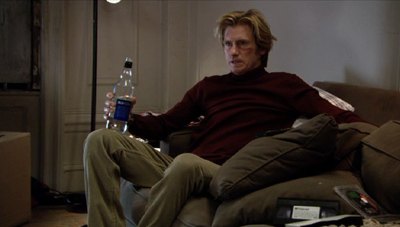 The jump-off point for the entire show is 9/11, an event that left the FDNY devastated and personally took Tommy's best friend and cousin Jimmy Keefe. The show's treatment of 9/11 is unusually blunt, as the writers waste no time pointing out how it's old news to most Americans, leaving the once-sainted firefighters as little more than underpaid city employees. But they're not interested in making easy political points either, especially in the second season, since the disconnect between the public's hazy recollection of the attacks and the immediacy of the memory for firefighters like Gavin is mined for its emotional aspects. When Tommy, reeking of booze, visits a street vendor hawking Ground Zero tourist crap the show displays both the crass commercialism that has turned a mass grave into an attraction and Tommy's inability to cope with reality and move on. 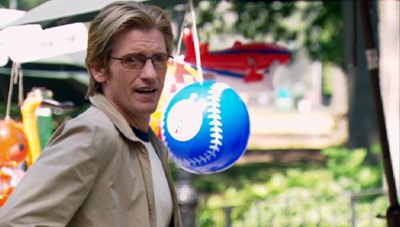 The grim opening episode finds Tommy dangerously close to just ending it all as he sits alone, Travis Bickle-like, in his bare apartment. His work, his usual reason for existing, is barely better as he makes the trek out to Staten Island just to be lectured on the evils of swearing while sitting around with no fires to put out. While the show's view of Staten Island as a sleepy little burb is exaggerated (let's face it, Staten Island is filled with Brooklynites) the contrast between Tommy's action-packed Manhattan firehouse and a house that considers putting out a car fire legendary is clear. For a man who seems to get all of his self worth from running into burning buildings this new post is purgatory.

But Tommy's biggest struggles are personal. While the specifics of the storylines change at a fevered pace during the second season (sometimes disappointingly quick) Tommy's emotional journey is slow and painful. The Staten Island situation is solved too early, as is the problem with what to do with Tommy's too-good-to-be-true replacement in the city (played with relish by Oz's great Lee Tergesen) but Tommy's struggles with booze, pills, depression, and the intricate and tangled web of interpersonal relationships that comprises his life is handled with amazing patience.

In the first season the show took a big risk by visualizing Tommy's deteriorating mental state by having him constantly surrounded by the ghosts of the people he feels he failed, most notably his cousin Jimmy. Played by James McCaffrey, the alternately bitter and jovial ghost of Jimmy was a great partner for Tommy, egging him into all sorts of harmful situations. In season two, with his mental state a rollercoaster of improvements and downward spirals, Jimmy is less present. He mostly appears when Tommy is most vulnerable, sometimes to devastating affect. Tommy's inner dialog has a sort of Fight Club-like quality as he tries to rationalize his problems and attitude a million different ways. Jimmy offered a familiar voice in the first season, but by halfway through this one he's at odds with Tommy. The relationship between a man and his ghosts is explored in powerful and heartbreaking ways here. 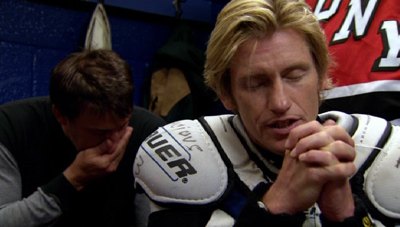 But the show is also not afraid of taking new risks, so this time Tommy's regular companion is none other than Jesus Christ himself. Played by Bernardo De Paula (fearlessly tackling a truly bizarre role) this version of Jesus wants to lead Tommy down the right path, even to convince him that there is good in the world. While it reads terribly, this development (coming in a show steeped in the sort of religious ambivalence that can only come from generations of blue collar Irish Catholicism) adds an unhinged but honest perspective to the show: Jesus here is a straight-talking guy, the kind of person who Tommy can bounce ideas off of. His words are simple but he knows how to drop them when they count.

In addition to the show's groundbreaking drama, it's notable for the way it mixes in some very funny comedy. While the entire series is filled with comic moments (the gallows humor necessary to the job is often funny and sick at the same time) but a couple of show-stopping scenes are of particular note, including a scene where the guys expound on words offensive to women (and in the process coin the hybrid terms "cwat" and "twunt") and an incredible scene in a sensitivity training seminar.

Tommy's storyline is outstanding (and far from resolved by the finale) but the paths facing many of the show's other great characters can be uneven. Season two offers barely anything rewarding for firefighter Sean Garrity (Steven Pasquale, whose character has been dumbed down to a ridiculous degree) and probie Mike Silletti (Mike Lombardi), who goes from one dumb girlfriend storyline to another without any emotional payoff. In a season low-point Garrity briefly dates an FDNY groupie who intentionally sets fires to get the attention of studly firemen. This potentially interesting storyline is dropped almost immediately in an uncharacteristically stupid way. And Lieutenant Kenny Shea's relationship with a high priced call girl turns cringe-inducingly moronic before ending with an easy, but slightly less stupid, twist. John Scurti is so good as Shea that he almost overcomes some impossibly lame dialog involving a pimp named "F-Bomb" (is Omarosa a writer on the show now?) but not quite.

It's especially jarring when storylines like those are juxtaposed with emotionally gripping stories involving Chief Reilly's relationship with his gay son (an open wound continued from the first season) as well as his agony over his wife's continued deterioration from Alzheimer's. Jack McGee may land roles like Reilly due to his real-life firefighter's persona, but with these two storylines here he really mines some rich emotional material. His anger and exasperation at his wife's inability to remember his name is potent.

The other season long firehouse storyline involves Franco (Daniel Sunjata) and Laura (Diane Farr) and, while they have their out-of-character moments it's an interesting development, as much for how everyone reacts as for Franco and Laura themselves. 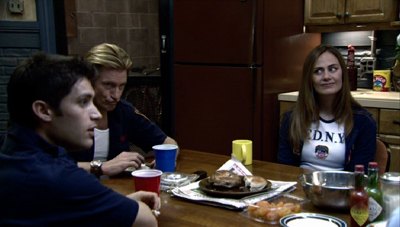 Tommy's family is full of characters too, including his brother Johnny and cousin Mick (Dean Winters and Robert John Burke, respectively, both rock solid) as well as his dad (played by the great Charles Durning), who returns from overseas married to Mrs. Ng (whose last name is hilariously mispronounced by everyone who meets her) and insane uncle Teddy (Lenny Clarke). Teddy is the only consistently cartoonish character on the show who always works. Something about Clarke's mugging is totally magnetic and hilarious.

Tommy's estranged wife Janet is still marred by the sometimes unconvincing and ethnically diluted performance of Andrea Roth, but her boomerang storyline is engaging nonetheless. Jimmy's widow Sheila, on the other hand, is brilliantly portrayed by the fearless Callie Thorne. Of all the show's characters Sheila's mental state may be closest to Tommy's. Their semi-incestuous relationship is unhealthy for both but the actors make it feel desperately necessary.

As much as the other characters are fascinating, Rescue Me is Tommy's story. From the scene in the first episode when he sits alone watching a home movie featuring an entire cast of people whose lives are ruined, as hard to watch as anything I've seen on TV, to the unrelentingly grim (and horribly real) brutality of the final two episodes of the season, Tommy Gavin's life is a shambles and Rescue Me chronicles the descent.

VIDEO:
The anamorphic video looks outstanding. There are some moments in darker scenes where the image breaks down a bit but overall it's bright, sharp, and compelling. The show is filmed in a very cinematic way, with the camera work and lighting usually going beyond the call of duty. This is a very handsomely produced show and the DVD, re-mastered in HD, offers a great visual experience.

AUDIO:
The Dolby Digital 5.1 audio is almost as good. The sound is generally beautifully dynamic, with the voices clear and the ambient sounds realistic and effective. There are some scenes, however, marred by a strange hiss or crackling. But overall this is an engaging presentation.

EXTRAS:
The four-disc set is packed with extras. Each disc contains three or four episodes (the season totals thirteen) and is supplemented with a total of six featurettes, 35 deleted scenes, a blooper reel, and a teaser for the third season.

The behind-the-scenes segments are all pretty good. Featuring a lot of on-location footage and cast and crew interviews they're well produced and informative. It's always interesting to see which actors sound totally different out of character (Sunjata especially). The featurettes break down into the following titles: "The Second Season," "Filming in New York City," "The Kitchen," "Working with the Cast," "Diane Farr Talks to the Real NYFD," with each obviously focusing on a different aspect of the show.

The deleted scenes are really a bounty. While the transfers are low resolution and the sound unmixed, they round out a lot of little subplots and add some nice moments. Each disc features the scenes pertinent to the episodes on that disc and they make great supplemental viewing.

The blooper reel, like all blooper reels, is hit and miss, although given the make up of this cast, there are some very funny moments.

Missing from this season are the excellent commentaries that Leary and Tolan contributed to a couple of the episodes on the first season set. I assume they were busily preparing the third season when the DVDs were in production but it would have been nice to have them back.

FINAL THOUGHTS:
Rescue Me is uneven and all over the place, but that comes from the creators' willingness to try just about anything and switch gears quickly if, I assume, something's not working. Like Joss Whedon's writing, there are moments of adolescent stupidity mixed in with profound insight. Somehow the crazy whole here is far more than the sum of its parts. The show itself seems as crazy as its borderline characters and there's something to be said for an ongoing series that's so willing to take its viewers for such a wild ride.