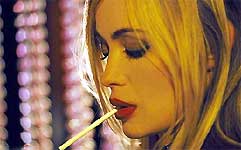 After years of living together Catherine (Fanny Ardant) is convinced that there is nothing that Bernard (Gerard Depardieu) could do to surprise her. Yet, when she accidentally discovers that he has an affair with a younger woman her world collapses with a bang. Shocked and unsure how her discovery would affect their marriage Catherine decides to hire a beautiful prostitute (Emmanuelle Beart) who must find out what is it that Bernard sees in other women.

As Nathalie agrees to do the job Catherine begins to discover a side of her husband that for many years has remained veiled in secrecy. Instead of making the routine scene however Catherine gently approaches Bernard willing to learn why their relationship has failed. Surprisingly Bernard explains to her that Catherine will forever be the one and only woman in his life – their relationship has not failed, rather it has matured. 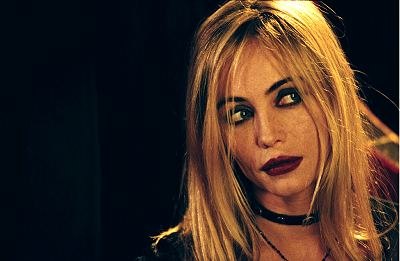 Intelligent films about marriage with all of its hurdles are a rare occurrence. Most certainly well-made films that deal with the subject without resorting to the usual clichés require plenty of delicate ingredients to build a successful story - from a good script, to refined performances, to a director who knows where to tweak the story so that the audience is forced to ponder all the whys and ifs.

Fortunately enough French director Anne Fontaine, who made a name for herself with Nettoyage a sec a.k.a Dry Cleaning (1997) at the Venice Film Festival where she won the Golden Osella Award for Best Original Screenplay, has managed to put together just about all of the above mentioned ingredients in a most elegant mix. With a story that practically touches upon every single area of the union between a man and a woman which time is likely to test Anne Fontaine's Nathalie...(2003) is a pleasure to behold.

Like most good French films Nathalie...relies on rich characters that as the story progresses become more and more complex. The deceivingly transparent script of this rather recent film offers a nuanced storytelling that anything but follows a straightforward path. From the unusual behavior which Fanny Ardant's character reveals (most certainly this is not what I would describe as the "logical" behavior one is likely to see in characters that Hollywood routinely attempts to convince us are "real") to the unexpected answer she receives from Bernard as well as the seductive skills of a prostitute who (surprise, surprise) has a mind of her own Natalie...is a film for the thinking viewer.

There are two reasons why I would like to highly recommend this film to you. Reason one: Anne Fontaine's Nathalie... shows perfectly a fragment from the life of a couple where two people attempt to understand each other after their union has been endangered. There are no calls for blame neither there are lessons to be learned. The film is focused on the process of communicating the issue which many couples are unable to sustain. Reason two: elegant performances that transform a risky subject into a modern story about maturation.

Ever since Nathalie...made its way across European theaters and North American reviews uncovered that the story does not offer explicit sex yet it only provides "food for thought" the film somehow lost its appeal and became "lousy" (Kim Linekin). Here's a hint: perhaps it was never meant to have the type of "appeal" some wanted it to have!!!

In 2004 Nathalie...was nominated with the Audience Award for Best Actress (Fanny Ardant/ Emanuelle Beart) at the European Film Awards held in Barcelona, Spain.

I have some very good news and some mildly disappointing news. The good news is that Koch Lorber have flagged the print properly and converted it so that it accounts for the PAL-NTSC discrepancy (I am quite certain they used a PAL master for the release). So, there is no heavy "ghosting" that we so often see in local releases of European films. The mildly disappointing news comes from the fact that the French DVD (which I own and compared to the R1) is slightly wider in terms of aspect ratio than the herein reviewed Koch Lorber release. The difference can hardly even be noticed unless you have both DVDs right in front of you but I thought that you should be aware of it. The film's original aspect ratio of 2.39:1 therefore is slightly altered yet it is enhanced for widescreen TV's. The image offers plenty of detail, great contrast, colors are well saturated and vibrant, and I spotted no print damage whatsoever. During two scenes I spotted an extremely mild "combing" effect which you will not notice if you are going to view the print on a standard tube. All things considered this is a very good presentation sans the technical issues noted above.

Unlike the French edition released by Studio Canal which offers an active 5.1 mix the R1 version contains only a French 2.0 Dolby Digital track with optional (yellow, rather large) English subtitles. The audio is crisp and clear but I wonder why Koch opted only for the Dolby Digital 2.0 track, were there any restrictions? I think that the audio presentation might prove a bit disappointing for some fans of the film but in general this is a mostly dialog-driven production so as far as I am concerned, in this specific case, the lack of the 5.1 mix is not so distrubing.

Aside from the original theatrical trailer the only other extra material is a "Making-Of" featurette which has been ported directly from the French disc. While not as insightful as many might think the extra is quite "revealing" and fans of E. Beart should be quite happy.

My opinion on this disc gravitates somewhere around granting it a "Rent it" mark for technical presentation and "Highly Recommended" for the film and the great performances. Koch Lorber have done quite a few things right (bravo on preserving the original French cover and not adjusting it as the British did for their release) yet they seem to have failed a bit in two key areas: audio presentation and the very minor aspect ratio issue. But they are improving and I couldn't be any more excited!! RECOMMENDED.