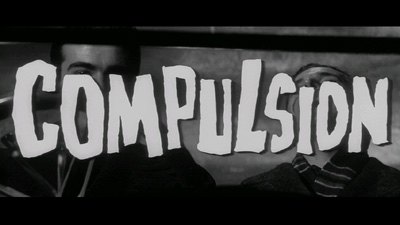 Two overly privileged prodigies, Judd Steiner (Dean Stockwell) and Artie Strauss (Bradford Dillman), set their university on its ear with a short but savage crime spree. Beginning with petty theft, they quickly fast forward to murder. The pair abducted a local boy and tried to collect a ransom from his rich parents, only the body was found before the payoff could happen. A fellow student and budding reporter, Sid (Martin Milner), discovers a pair of glasses on the deceased that clearly doesn't belong to the child, and its specific make eventually leads to the duo's arrest. The community is shocked further when their motives are revealed: they wanted to prove their own superiority, casting themselves as living embodiments of Nietzsche's superman. Enter superstar lawyer Jonathan Wilk (Orson Welles), a controversial figure whose low-key manner belies a shrewd mind. If the trial goes according to plan, he will prove the boys have diseased minds and hopefully save them from execution.

Compulsion was made in 1959, some 35 years after Nathan Leopold and Richard Loeb committed the real-life act of murder on which the film (and the novel that preceded it, written by Meyer Levin in 1956) is based. It's hard to imagine a world where the media takes that long to capitalize on such grisly events, given that modern television would have a dramatic version on the air within a couple of months, most likely starring one of the kids from "The O.C." The fact that Leopold and Loeb's lawyer was the famous Clarence Darrow should have made it all the more attractive. (It should be noted that Hitchcock's Rope (1948) also had echoes of the Leopold and Loeb, and it was based on a much more timely 1929 stage play.)

The film Compulsion is split into two halves. The first is dedicated to the crime and, more specifically, Judd and Artie's attempts to cover it up. It begins with their fraternity house robbery, the boys racing through a rear-projected night as if in some lurid teensploitation potboiler. The pair are a bundle of psychoses. Judd is all nerves and brain, a lost little boy who tries to bury his emotions behind a contrived intellect. Stockwell plays him with a tense fragility. He is eager to please Artie, who is much more visceral. He's extroverted and demanding, whereas Judd is introverted and supplicating. There are definite homoerotic overtones to their relationship, something that is even alluded to later when Wilk asks them if there are girls who will testify on their behalf and quell the rumors that are inevitably going to start about them. Ultimately, though, their friendship is less about romantic love than it is about domination and submission, with the control shifting back and forth between the boys until finally they have no choice but to sell one another out. 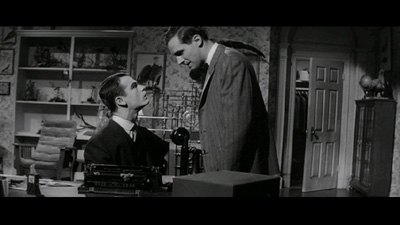 The second half of Compulsion is given over to the trial. Welles may receive top billing, but he doesn't even show up until the boys are in jail. Wearing excellent make-up and wig, Welles goes to great lengths to bury his rather famous face, playing a man who is near the end of his career and who holds back his energy until it will be most effective. Given Welles' reputation as a ham, it's nice to see him working with such restraint. His final monologue in the courthouse is a virtuoso performance. Never once does he shout, wave his hands, or pound his fists, not when the words can work such magic on their own. A lesser actor could have made the capital punishment message come across as heavy handed, but Welles drives it home with grace.

There is very little that is zippy or overdone about Compulsion. Outside of the pulped-up title sequence, the film is evenly paced and more about the facts than the melodrama. In fact, screenwriter Richard Murphy and director Richard Fleischer understand that life is packed with melodrama, and we don't need heavy swells to point it out. Just let the characters be who they are, and the emotion will come out. The result is a film where the camera remains unobtrusive, always hanging back as if watching from the sidelines, a cold investigator rooting out the truth. 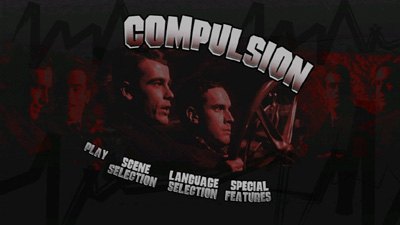 Video:
Compulsion has some wonderful black-and-white cinematography, and it shines here in an anamorphic 2:35:1 transfer. At times, there was some fuzziness, but I only noticed it in a couple of scenes and the lights and darks are otherwise contrasted nicely overall. The picture is free of scratches or decay.

Sound:
The sound mix is Dolby Surround 4.0. It's well done, with the voices and music reaching the right pitch.

Extras:
There is so little by way of extras here, Fox doesn't even list them on the box: two trailers for Compulsion and two more for The St. Valentine's Day Massacre and Murder, Inc. I wouldn't have minded seeing some historical documentaries on Darrow or Leopold & Loeb.

FINAL THOUGHTS:
Compulsion is classic filmmaking at its best, working both as a character study and social drama. I'm not sure Dean Stockwell or Orson Welles have ever been better. While the DVD doesn't offer anything more than the movie, in this case the movie is simply enough. Highly Recommended. 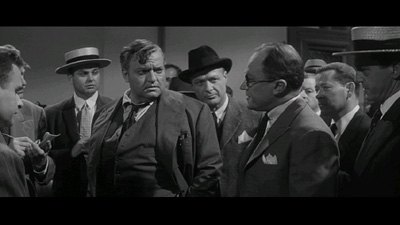