Walt Disney's It's a Small World of Fun, Vol. 2 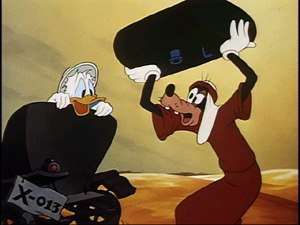 The second installment of Disney's It's a Small World of Fun! raises the quality of the cartoons chosen, but strays a little when it comes to fulfilling the operation concept. The design of the Small World DVDs is that they are all classic shorts about different places around the globe. While this one lists Argentina, Great Britain, and Egypt amongst its focus countries, more than half the cartoons don't really seem to be about the places they promote.

Like the first volume, all but one of the cartoons ("Crazy with the Heat" with Donald Duck and Goofy) are available on other discs. Given that they are all really strong selections, however, makes the disc a little more desirable. Since only two of the six (the Mickey and Goofy solo material) are available in the higher-end Disney Treasures series, I didn't have as many of them in my pre-existing collection this time around.

* "Pedro" (focus region: Argentina): "Pedro" is the story of a little plane who was born into a line of mail delivery planes. When his father gets sick, Pedro has to fly his route, battling the elements--particularly those that exist around a treacherous mountain, which is anthropomorphized, as well. The Disney studios had a knack for these kinds of stories, bringing machines to life in a clever way. While not as good as "Susie, the Little Blue Coupe" elsewhere on the DVD, "Pedro" is a lot of fun and the skyways are painted with style. Plus, narration by Stan Freberg is never a bad thing.

* "The Olympic Champ" (Greece): Goofy is the object, and the lesson is the Olympic Games. Our hapless canine goes through the history of the games and the various events, causing a lot of bodily harm along the way. A funny outing for the Goofy series.

* "Peter & the Wolf" (Russia): This 1946 cartoon is a classic and belongs in any collection. Narrated by Sterling Holloway, and based around music by Sergei Prokofiev, it playfully applies some of the principles of Fantasia to a more classic Disney comedy style. Little Peter goes out hunting for the big bad wolf with some of his animal friends and soon finds himself in over his head. The animals all have wonderful designs, especially the little bird with his chin beard and furry hat. Delightful fun.

* "The Brave Little Tailor" (Great Britain): One of the best Mickey Mouse shorts, and one instrumental for his ample reputation (it was even nominated for an Oscar in 1939). After a misheard boast makes the people in Mickey's medieval village think he's a giant killer, he is sent off to take care of the colossus terrorizing their town. His survival instinct kicks in, and the resourceful mouse takes on the monster. The style is vintage Disney, and the characters have personality and the backgrounds are especially detailed.

* "Crazy with the Heat" (Egypt): An entertaining team-up between Donald Duck and Goofy, with the two wandering the desert and being attacked by rather forceful mirages. Good fun, but it could be any desert anywhere. The Egypt classification is a bit of a stretch.

* "Susie, the Little Blue Coupe" (U.S.A.): Another machines-as-people cartoon, and the benchmark against which Pixar's Cars will be judged. The story follows Susie from being bought new on the lot, to being worn down by her owner, abandoned, stolen, and finally resurrected from the junk heap. The scene when Susie is on the run from the law is masterfully animated, with the little car skidding in and out of traffic, passing behind a train, and ultimately crashing. Some of the overtones are darkly comic. A good finale for the series, but again, nothing uniquely American here to call it a U.S. cartoon.

Video:
All the cartoons are presented in a full frame 1:33:1 aspect ratio. Volume 2 has a better restoration record than volume 1, with the majority of cartoons getting a nice touch-up and none of them being as bad as "Gauchito" on the first DVD. The biggest loser, disappointingly, is "Peter and the Wolf." The print is often spotty with picture softness. "The Brave Little Tailor" also suffers from flyspecks in some scenes. 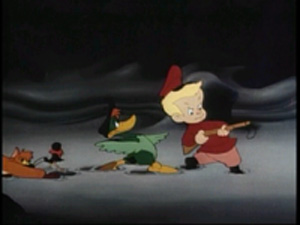 Sound:
A straightforward stereo mix, and a French audio track.

Extras:
Just a load of trailers for products on the big and little screen. Also, the "Fast Play" function that causes the programming to start after the commercials that open the disc, a "bonus feature" so that parents can put the disc on and walk away. Not very useful for us older viewers that can work a remote.

FINAL THOUGHTS:
I'm upgrading volume 2 to Rent It, with a slight lean towards recommending it higher. I'll definitely rewatch some of the cartoons often, but there is still a chance that even the ones I don't have on other discs will show up in better collections later. With less than an hour of programming, the It's a Small World of Fun series is not the greatest value for the animation consumer. 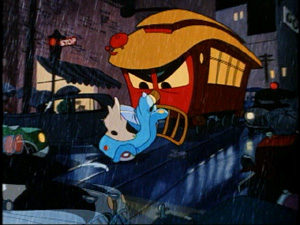