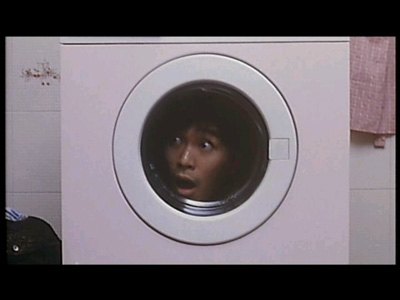 All's Well, End's Well is a lightweight screwball comedy with a heavyweight cast. Made in 1992, it stars Leslie Cheung (Happy Together), Stephen Chow (Kung-Fu Hustle), and Maggie Cheung (Hero). All are game to take part in the film's over-the-top-style, but they all also had much better things to come.

The script, written by Raymond Wong (who also stars), centers around one family, and takes them from the eldest son's wedding anniversary to the anniversary of his parents a couple of months later. Structured around three brothers, All's Well, End's Well has three concurrent story lines: Wong's marital woes, brought to a head by his cheating; Chow's womanizing and the strange, film-obsessed woman (Maggie Cheung) who turns her obsession on him; and Leslie Cheung's rivalry with a tomboy aunt. In the latter story line, both Cheung and the aunt (Teresa Mo) are clearly gay, though no one ever says. Cheung is actually pretty entertaining as the effeminate flower arranger, but given his tragic suicide in 2003, the fact that the film ends with the two "curing" each other by having sex left a pretty bad taste in my mouth.

Not that the rest of the film was much of a treat. When it was watchable at all, it was thanks to the charismatic stars. Stephen Chow and Maggie Cheung have some very sweet moments together, though I think the regular use of the word "rape" was a mistranslation that hurt the romantic angle. They indulge in parodies of popular movies of the day--the funniest is seeing Cheung dressed as Madonna from Truth or Dare, conical breasts and all--making this by far the most successful of the stories, with Chow eventually feigning madness to get out of his romantic entanglement; yet, it's also indicative of what is wrong with All's Well, End's Well. While director Clifton Ko flirts with the sort of audacious spoofing that Chow has since become known for, he shies away from taking the comedy to its most audacious limit. So, the film merely skirts the edge of Naked Gun territory, landing somewhere along the lines of what you used to be able to find on the USA Network at 3 a.m. on a Saturday night.

Plus, a lot of All's Well, End's Well simply isn't funny. People with their heads stuck in the dryer and endless off-key karaoke performances just don't get the laughs. Wong gives himself the worst story line, and every time Ko cuts away from Chow and Cheung, I found myself wishing I could just hit fast forward.

Video:
All's Well, End's Well is an older Hong Kong DVD, most likely ported off an ancient source. Dueling Chinese and English subtitles are imbedded into a rather dirty transfer. The makers of this disc put in the minimum of effort.

Sound:
There is both a Cantonese and Mandarin audio track. The Cantonese is a pretty flat mix. The subtitle translations are extremely poor.

FINAL THOUGHTS:
Though All's Well, End's Well may have some gung-ho early performances by some of the bigger Chinese stars, their talent is wasted on a pretty dismal script. While die-hard fans of any of the actors may consider renting it, my general advice is that you Skip It.