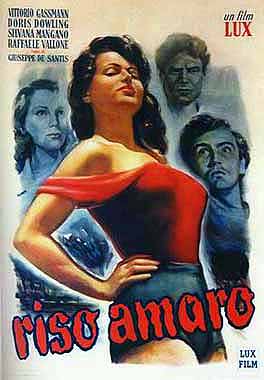 In a desperate attempt to avoid the police Francesca (Doris Dowling) and Walter (Vittorio Gasman) find themselves on a busy train station in Northern Italy where massive groups of seasonal workers are heading towards the rice plantations of the Po Valley. As Walter disappears in the crowd Francesca joins a group of women who seem visibly excited that work is finally on the horizon. Francesca soon befriends the voluptuous Silvana (Silvana Mangano) and upon arrival at the rice fields the two quickly become involved in a deadly web of lies and murder.

Directed by the famous Guiseppe De Santis (original material by Carlo Lizani) Riso Amaro a.k.a Bitter Rice (1949) is a fine example of Italian neo-realism with plenty of the marquee for the era melodramatic overtones. Shot in glorious black and white Bitter Rice also reveals a stylistic direction that very much elevated De Santis amongst the most notable directors of his time: heavy social context and breathtaking camera work placed him next to De Sica and Visconti.

Nominated with an Oscar for Best Story (1951) Bitter Rice achieved sound success both in Europe and North America. The perfectly-scripted story had an enormously positive effect on those who saw the film and business offers for future collaborations quickly followed up. In 1951 Silvana Mangano agreed to star in Alberto Lattuada's Anna about a nurse with a troubled past and her status as one of Italy's most-talked about sex symbols was solidified.

After Bitter Rice however Silvana Mangano's most memorable performance was in Alessandro Blasetti's Io, io, io…e gli altri a.k.a Me, Me, Me…and the Others (1966), a film that currently enjoys a beautifully restored print introduced as part of the wonderful Cinema Forever Italian classics, where she teamed with her long-time rival Gina Lollobrigida as well as Vittorio De Sica, Marcello Mastroianni, and Nino Manfredi. Of course Bitter Rice (a film which is nowhere to be found in North America) remains not only the pinnacle in Silvana Mangano's career but also Giuseppe De Santis' undisputed masterpiece.

Part of the Il Grande Cinema Italiano series Bitter Rice comes in a sparkling, brand new and digitally restored, print presenting the film in its original aspect ratio of 1.33:1. Supplied to the Italian distribs by Cristaldi Film (the same company which Criterion contacted to negotiate the upcoming R1 release of Pietro Germi's Seduced and Abandoned) Bitter Rice looks stunning!!! Deep and lush colors, spectacular degree of contrast, magnificent progressive PAL print, a tight to the frame image, is what easily ranks this DVD as one of the best collector's finds coming in from Italy. Frankly, considering the fact that this is a film that was shot in 1949 the results are simply intimidating – the presentation is amongst the best I have seen for a film this old. PAL-encoded, Region 2.

Presented with its original Italian mono track and a brand new 5.1 mix Bitter Rice sounds exactly the same it looks: amazing!! Crystal clear and crisp sound quality is what the Italian distributors have provided and there is absolutely nothing that I could criticize here: just a superb presentation. With optional white Italian and English subtitles (it is worth pointing out that the English translation is 100% immaculate, truly a great job!!).

Aside from a collector's booklet provided with the DVD which is entirely in Italian there is nothing else to be found on this release.

A spectacular Italian release of a film which I have been after for many, many years!! The presentation is beyond belief - (I wonder now how Criterion will match the Cristaldi Film release of Germi's Seduced and Abandoned which is also part of this excellent, though now defunct, series) – you have to see how good this film looks! On a side note if you had any interest at all in Italian cinema I suggest you look for this excellent DVD as soon as possible as the series are now discontinued and many Italian vendors no longer carry this title!! HIGHLY RECOMMENDED.