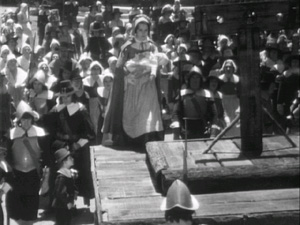 1934 was an odd time to try to adapt The Scarlet Letter. Cinema was still trying to translate the language of silent films into the realm of actual spoken language, and a new production code was bringing the hammer down on salacious material. The result was that Nathaniel Hawthorne's classic novel of passion and sin was turned into a movie that was accurate in external detail but defanged of all of its internal turmoil.

All the details are there. Hester Prynne (Colleen Moore) has been living alone for two years after her husband was presumably lost at sea, and so the town is naturally shocked when she shows up with a brand new baby. She is in the New England of the Puritans, after all, and such things are not done; thus, Hester is sentenced to forever wear a bright red "A" on her chest so that everyone will be aware of her wanton ways. What they aren't aware of is the fact that the father of the child is the local preacher, Arthur Dimmesdale (Hardie Albright), and that Hester's "dead" husband is alive and masquerading as the new town doctor, Chillingworth (Henry B. Walthall).

Where The Scarlet Letter succeeds is in detail. The sets and costumes are remarkably well put together. I had no trouble accepting the hills of Sherman Oaks, CA, as Massachusetts of the 1600s. Director Robert G. Vignola and screenwriters Leonard Fields and David Silverstein also do well when straying from the source material. Two comedic characters, Bartholomew (Alan Hale) and Sampson (William Kent), break up the drama with several clownish routines. In a way, their action parallels Hester's plight, as they eventually tumble into sin themselves when one of them accidentally spies a widow's "nether garments." Even so, this comic business is a bit out of place for those looking for a tragic tale of eternal torment.

And that's where The Scarlet Letter fails. Moore is fine as the saintly Prynne, but Walthall garners few chills as the symbolically named Chillingworth, and by the time Albright gets his Dimmesdale revved up to a guilt-ridden fever pitch, the movie is over. Gone are the late-night lamentations that made Hawthorne's book so emotionally compelling. Under the strictures of the age, all of the players keep a staid distance from one another. This stiffness carries over into the filmmaking itself, which is most often very straight. The indoor scenes in particular are shot head-on, with two characters framed in the center. Outdoors, there is more movement, particularly in the final procession of soldiers when Dimmesdale loses his cool once and for all. It's too bad that a little bit more couldn't have been done with that dichotomy, as the theme of man's morals vs. nature's urges was a hallmark of the novel. Most impressive is the scene where Prynne and Dimmesdale are caught in a lightning storm, and the reverend sees a huge "A" form in the sky.

In the end, this '30s picture is an interesting glimpse into cinema's past, but it doesn't yet touch on the motion picture industry's glory to come. 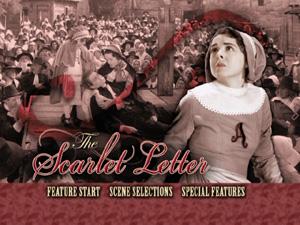 Video:
The UCLA Film and Television Archive worked with a 35mm nitrate original camera negative to create the clearest picture of The Scarlet Letter that they could. It's not perfect. There is still some scratching and phantom-like spots, edge softness, and occasional skips. Still, the inconsistencies are forgivable given the age of the film. None of the slips are overly egregious. Image presents it on the DVD in its original 1.33:1 aspect ratio.

Sound:
The mono track is mostly clear, with only a little hiss and the occasional voice drop-out.

Extras:
As far as bonuses, there is an extremely brief stills gallery and the original trailer for The Scarlet Letter, which is amusingly more lurid than the film itself. There is also a full-length commentary by Sam Sherman, who bought the rights to The Scarlet Letter in the early '60s and used it to start his own independent film company. He uses the commentary to explain a little bit about that experience, as well as sharing information he's gathered about the making of the film, including reading letters from both Moore and Albright. Additionally, he covers other adaptations of the book and details a lost alternate ending. His manner is that of a genial raconteur, and so his commentary track is fairly entertaining, even when he's merely trying to figure out how to pronounce "ignominy." (Hasn't every high school student who read The Scarlet Letter had that word burned into his or her brain, just like the shame it describes was burned into the chests of Hawthorne's sinners?)

FINAL THOUGHTS:
The Scarlet Letter is more interesting as an historical artifact than it is a film you will likely rewatch over and over. Since Image has seen fit to give it such respectful treatment for DVD, I'd say Rent It so that you can see the film industry taking its formative steps and enjoy some of the classic performances. 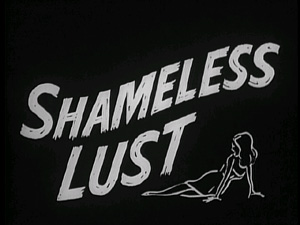