Guardian of the Realm

If I believed for a second that Guardian of the Realm was created as a very broad and very straight-faced satire of action movies, then I'd probably have to give the thing my recommendation, because (no lie) the thing had me rollin'. Seriously: There's more laughs in this movie than there are in the last six Adam Sandler movies combined. (And I'll even throw the entire works of Rob Schneider into the mix.)

Apparently it's "the near future" and Los Angeles is the meeting place for a bunch of inter-dimensional demon beasts. (They actually look like everyday people wearing goofy Halloween costumes, but let's keep it moving.) And whenever you have intermittent demon infestations, you of course need a gang of Demon Hunters. Despite being rather small and possessing of a mildly squeaky New Zealand accent, Josh Griffin is Demon Hunter numero uno. New in town is buxom blonde butt-kicker Alex Marlowe, and together these guys will destroy all demons! Hiii--yaaaa!

Only ... you're going to have to suffer through a whole lot of downtime in between the rather amateurish action sequences. Running an unfair 110 minutes in length, Guardian of the Realm contains huge reams of laughable dialogue and "interdimensional demonic infestation" gobbledygook, delivered by a bunch of somewhat photogenic, but helplessly undertalented, performers.

As our head honcho demon-killer, Power Ranger turned actor Josh Levy is woefully short on screen presence. And woefully short, too. Leading lady Tanya Dempsey comes off like she was just handed her script fifteen minutes before shooting. Either that or they just let the gal make stuff up as she went.

The action scenes are brief and clumsy. The dialogue scenes are long, frequent, and painful. The visual style can be best dismissed with a cocked eyebrow and a chuckle. And the plot is rehashed comic book schtick mixed with some H.P. Lovecraft Cliff's Notes. Aside from the frequent visits from components that are either painfully stupid or unwittingly hilarious, Guardian of the Realm is kind of a chore to sit through. (Trim the thing down to 81 minutes and it might make for an amusing guilty pleasure.)

Ah, and then there's the gold. The unbelievably, astronimcally, outrageously, over-the-top camp-classic performance by luscious Lana Pirian as Nasty Nikki, former Siberian mail-order bride who's currently the very curvaceous (and bloodthirsty) vessel for an immortal demon spirit called Virago. Just to give you a glimmer of the cinematic insanity -- and also to prove that I am not making any of this up, I present one visual aid: 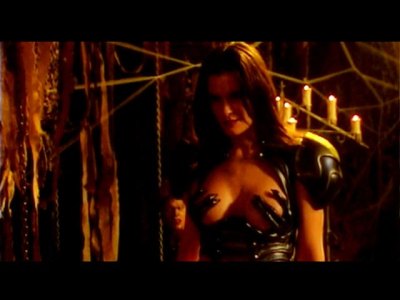 See what I do with my weekends while you get to go off and watch good movies? 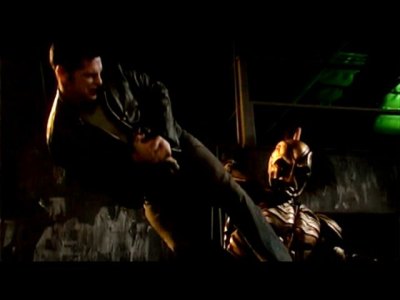 Video: The widescreen transfer is pretty darn atrocious. Call it the source material or call it inept DVD techs, but the flick is blotchy, splotchy, and coated with grunge.

Audio: The Dolby 5.1 mix is really quiet on the dialogue and obnoxiously loud during the explosions. Balance, people.

If you simply have to see those screen shots walk and talk (and I can't say I'd blame you because I also love crap cinema), then feel free to give Guardian of the Realm a rental. But don't come crying to me if the thing makes you just a little bit stupider.