Product of the enigmatic duo Michael Powell and Emerich Pressburger Black Narcissus (1947) tells the story of a group of nuns who settle on the top of a picturesque mountain in the Himalayas looking to establish a vital Christian community. Led by Sister Clodagh (Deborah Kerr) the nuns quickly set up an ambitious school where the locals can learn Christian values. But as the region respects other gods and customs the nuns are thrown into an awkward mix of events that will test their faith and devotion. 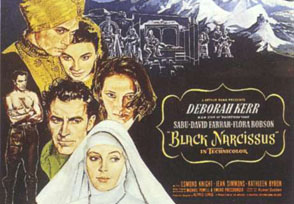 With Debora Kerr in the middle of this curious project Emeric Pressburger and Michael Powell created one of the most revered films in the history of British cinema. Black Narcissus certainly offers a strange mix of melodrama-between the awkward and at times even cocky behavior of Mr. Dean (David Farrar) and the unpredictable emotions showcased by the nuns led by Sister Clodagh this is a film built upon some impressive contrasts. In fact, the deeper one delves the clearer it becomes that the beautiful imagery Black Narcissus reveals was meant to highlight the bigger picture the two Brits had in mind-the moral decay amongst those who must spread the words of God.

Like everyone else that saw Black Narcissus back in the days my first impression was that of a film with a predictable message. Certainly I was not moved by the characters as much as I should have. Despite the heavy symbolism I concluded that the story left plenty of loopholes that will eventually raise a few eyebrows here and there. It was much later that I began seeing how critical the message of Black Narcissus is and how incredibly delicate its construction was.

The famous sub-theme about British colonization and its impact on other societies is in my opinion one of the strongest critiques Black Narcissus offers. The arrival of a group of nuns high in the Himalayas with nothing else but noble intentions to spread the words of God is somewhat quickly overshadowed by their inability to address the numerous medical problems the village is struggling with. Emeric Pressburger and Michael Powel also quickly proceed to sneak in a rather bold for its time suggestive comment where Christianity is countered with the other religions people from the area practice. To say that the creators of Black Narcissus were walking on thin ice is certainly an understatement.

Similar to Jean Renoir's The River (1951) Black Narcissus relies on a novel by Rumer Godden. The two films are equally impressive in their treatment of the literary text and in my opinion the beautiful cinematography they reveal is being used with the same intention-to enhance the suggestive nature of the story (each film offers multiple layers of social criticism). Black Narcissus however has the distinct advantage of being Michael Powell's first and indeed very successful experimental work where the music was composed before the footage was completed (film sequences were shot to playback).

Before we discuss the video presentation allow me to describe the package/presentation of this new French double set. Black Narcissus arrives in a splendid large double case containing a digi-pack double folder with a clear back case. Underneath there is a large reproduction from the film highlighting the Himalayas. The actual clear-case holder with the two DVDs is then tucked neatly into a larger holder containing a massive commemorative 40-page booklet (entirely in French with excellent stills from the film).

Unlike the earlier released by Criterion R1 DVD this new R2 double set of Michael Powell and Emeric Pressburger's Black Narcissus offers a vastly superior image quality in just about every department you could think of. Part of the "Collection Institut Lumiere" series (The 49th Parallel and The Red Shoes are also being released in France) this new print offers impressive degree of contrast, rich and well-rendered colors, and most importantly no flickering whatsoever. Placed next to the Criterion release there is a world of difference between these two discs which becomes striking when you view the new Warner set on a large TV screen. I believe it is worth noting that the print never breaks down and remains solid throughout. This being sad you will notice that there is some disturbing color-manipulation on the Criterion disc which is not present on the WB print. To sum it all up this new set of Black Narcissus is worth every penny. Excellent job Warner! Presented in its original aspect ratio of 1.33:1, PAL-encoded, Region 2. Each of the two DVDs allows the viewer to set the menu system entirely in either French or English.

To match the impressive video presentation WB have delivered an equally deserving audio treatment which is indeed nothing short of outstanding. Presented with its original English Dolby Digital 2.0 mix and optional French subtitles Black Narcissus comes with a crisp and clear audio that is practically flawless. I could not detect any dropouts, issues of balance, or hissing-just a well done mixing job as one should expect a film of this magnitude to be provided with.

Thanks to Xploited Cinema and their continuous effort to bring as much foreign produced (and often hard to find) cinema to US shores as possible I received this double set quite some time ago. And I did take my time with it as there is a sea of extras on this disc that are simply overwhelming!

On disc 2 you will find a wealth of extras, many of them quite extensive. First there is Memories of Michael- a documentary about the history of the film (there is plenty of talk about Jack Cardiff and the rest of the crew and in particular how they managed to recreate the Himalayas without ever setting foot in Asia). Next, there is Dating with an Aventurer which is an original French production that is being offered with optional English subtitles. In it you will find plenty of information focusing on the decision to adapt Rumer Godden's novel (a parallel is drawn between Michael Powell/Emeric Pressburger and Jean Renoir). Next, there is the Carlton Film Collection segment Profile of Black Narcissus, a large documentary piece focusing on the British duo, their characters, work, and creative ideas. Next, we have Painting With Light-a special presentation from the feature documentary "Persistence of Vision"-An exploration into the life and work of Jack Cardiff. Next, This is Color: a 1942 documentary part of the National Film Archive Collection directed by Jack Ellitt for the Strand Film Co.

A stunning presentation of Powell and Pressburger's timeless classic this new 2DVD set by Warner-France is a collector's dream. With a magnificent print, vastly superior to the one released by Criterion, and an entire second disc of informative extras I feel compelled to provide Black Narcissus with: DVDTALK Collector Series. Bravo!!