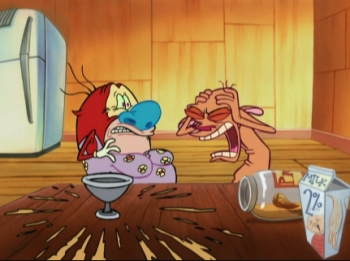 "A lot of the writers coming out don't care about these values…they'll go
as far as they have to go just for shock value and to make money."
– Terry McMillan (American author, 1951 - )

"My liver swells with bile difficult to repress."
– Quintus Horatius Flaccus (Greek poet, 65 BC - 8 BC)

In the long and sordid history of stomach-churning animation, John Kricfalusi's Ren & Stimpy is more of a milestone than a footnote. It began with a surprisingly successful debut at the kiddie-friendly Nickelodeon network, heralded as champion almost immediately following its August 1991 premiere. Though the success of Ren and Stimpy lasted longer than its creator's time with the network, his 1992 departure resonated deeply with fans. It was all downhill from there, so they say, as Games Animation was brought in to replace the original Spümcø team shortly after Kricfalusi's departure. A portion of the original spark was still present during a few post-Spüm episodes, but the latter-day Ren and Stimpy eventually fell flat and was cancelled.

The reason the first two seasons worked so well was the careful balance between gross-out humor and genuine off-the-wall charm. Ren and Stimpy naturally appealed to a younger audience (yours truly included!), and it's these early days that hold up the best some fifteen years later: for all its sick and twisted ingredients, the finished recipe is still strangely appealing. Later seasons weren't tame by any stretch of the imagination either, yet it seemed as if Games Animation were simply grasping at straws. After all, Ren & Stimpy just wasn't their baby.

A funny thing happened in 2002, aside from this: Kricfalusi was invited to resurrect the series for The National Network (later re-named "Spike TV"); what's more, he could finally take the kid's gloves off. He did, but the resulting batch of episodes---many of which never aired on Spike TV, or any other network for that matter---divided fans right down the middle. Some applauded his decision to finally make the show he wanted to make, with minimal interference from the powers-that-be. The other fans were simply turned off by what they saw; simply put, they didn't like seeing their childhood heroes go completely off the deep end. Unfortunately, I lean more heavily towards the latter camp, though I'm glad Kricfalusi was able to finally receive a hint of closure for his beloved creation (although he plans to release a few direct-to-DVD episode collections, providing releasing like this one prove successful). 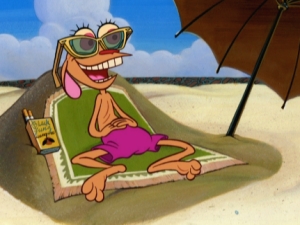 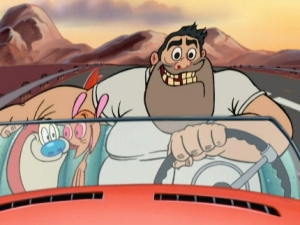 A popular sentiment of anti-censorship advocates is "if you don't like what's on, change the channel", and that's basically what I did when the new episodes aired in June of 2003. Ren and Stimpy was always a shining example of style over substance, and that's never more evident than in these six episodes: the animation and character designs show that John K. and company really have a passion for animation, but the weak stories epitomize empty, heavy-handed shock value. Needless to say, it's chock full of naughty stuff and certainly isn't for younger audiences.

To be fair, a handful of these episodes contain a few clever gags and twists, such as a tortured frog's timely demise in "Ren Seeks Help" and a rollicking "tribute" to animation legend Ralph Bakshi in "Fire Dogs, Part 2". Unfortunately, other episodes drag on much too long for their own good, including the infamous "Stimpy's Pregnant" and the slightly more tolerable "Altruists" (two of three included episodes with a double-length running time). All in all, only a few of these six uneven adventures show sparks of promise, while others fall victim to the same problems that arose when Games Animation took over: the balance between sick humor and controlled chaos just wasn't treated with respect.

If there's one saving grace to be found on Ren and Stimpy: The Lost Episodes, it's the participation of the creative team…and of course, the fact that these episodes are completely uncut. Word has it that a more all-inclusive box of everything Ren and Stimpy may see the light of day in the future; for now, this disturbing third leg of the duo's unlikely journey is available separately. It's actually a fairly solid collection, all things considered, yet it can't help but be dragged down by one of the things that made it successful in the first place: the gross-out factor.

Quality Control Department
Video & Audio Quality
As with past volumes, these episodes are presented in their original 1.33:1 format and look terrific overall. Colors are bold and bright, while the individual transfers appear squeaky clean from start to finish. The only problem here is a moderate level of interlacing (a common problem for animation DVDs), which creates softness and blurriness during certain scenes of action---and as fans of Ren and Stimpy know, these aren't exactly few and far between. The audio is also a quality presentation, as the included English 2.0 Stereo mix is dynamic and boasts clear dialogue and strong music. No subtitle options have been provided, while Closed Captioning doesn't seem to be available either. 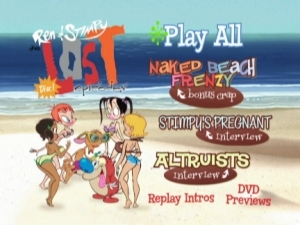 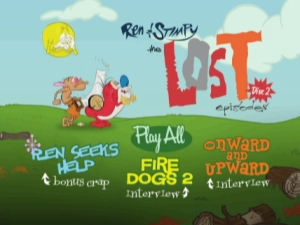 The appropriately-themed menu designs (seen above) are smooth and simple, offering easy navigation, a clean layout and helpful "Play All" options. Each of the six full-length episodes have been presented with roughly five chapter stops apiece, while no layer changes were detected during playback. This two-disc set is housed in a standard slim double keepcase, highlighted by colorful artwork and a nice insert with thoughts by John K.

Bonus Features
Even if you didn't care for the episodes themselves, each one includes a few bonus features that help add a little perspective. For starters, all six episodes are paired with Introductions with John K. and the creative team (ranging from roughly 4 to 9 minute apiece) and accompanying Interviews (roughly 4 to 18 minutes apiece); though they're recorded on the cheap, a few interesting stories and other layers help keep things interesting. Two of the six ("Naked Beach Frenzy" and "Ren Seeks Help") also include self-guided Animatic Galleries (10:56 and 1:49, respectively) and Pencil Tests (2:08 and 24:40), while the former also includes a look at Storyboards (1:51). Rewinding a bit, there's also a DVD Introduction with Weird Al Yankovic and John K. himself (9:02). Overall, it's a nice balance between art-driven and traditional extras, though it's odd that the creative team couldn't sit down for a few commentaries.
Final Thoughts

Even with a few bright spots, Ren and Stimpy: The Lost Episodes is a mostly dismal affair that will sharply divide fans of the series. It's nice to know that creators can occasionally give their twisted imaginations free reign, but these six misadventures offer sufficient proof that a little restraint can go a long way. The DVD presentation will please fans and doubters alike, offering a solid technical presentation and a handful of down-to-earth bonus features. While the concentrated nature of its content kills any obvious recommendation for a blind buy of The Lost Episodes, fans of Ren and Stimpy are encouraged to investigate for themselves before jumping to any caps-lock conclusions. Rent It.

Randy Miller III is a sick little art instructor and gallery assistant based in Harrisburg, PA, who also enjoys freelance graphic design and illustration. When he's not doing that, he enjoys slacking off, general debauchery, and writing things in third person.