Choose Your Own Adventure - The Abominable Snowman

A few years before I discovered the dark magic of Stephen King and Clive Barker, I read a lot of goofy stuff. From One-Minute Mysteries to Encyclopedia Brown to The Incredible Hulk, my tastes were pretty geek-lectic. And I also had a whole lot of fun with the Choose Your Own Adventure series. They even had numbers on the spines so you could collect 'em all and put 'em on a shelf! Neat!

The gist of the series was this: Let's say Choose Your Own Adventure #44 was "The Case of the Seriously Unpleasant Poltergeist." You'd start on page one and get a pretty standard set-up: The local mortuary is haunted by a ghost and you have to find out why before suppertime. So into the mortuary you go...

--If you'd like to enter the front door of the mortuary, turn to page 6.

--If you'd like to rustle around the bushes and enter through any secret passages that you happen to find, turn to page 44.

And on and on it went. Eventually you'd either choose your way to the happy ending in which you discover that the unpleasant poltergeist was actually a bird with a broken wing -- or you'd shimmy up the wrong drainpipe on page 62 and get pecked to death by crows.

It was a fun little gimmick, and it helped me to become the avid reader I am today. (Just last night I finally finished reading Hop on Pop.) So I told you all this pointless personal history just so I could tell you this:

Choose Your Own Adventure is on DVD now! Brilliant! The very first entry is called The Abominable Snowman -- and, yes, it has a "#1" printed on the spine of the DVD case, thank you very much. 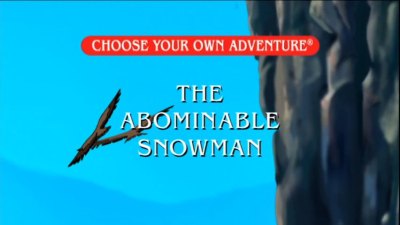 First off, the DVD case is pretty cool for a pair of reasons, not including the "#1" printed on the spine: 1. It looks just like the cover of the old book series, and 2. It has the name William H. Macy on it! Cool!

I'll save the extras for later on and simply hit PLAY here...

Animation's not bad... It's that "thick-bordered" stylized type that the kids seem to like. (Kinda like Clone Wars, only not as awesomely cool.)

So here's the gist, plotwise: The three North Kids (Ben, Marco and Crista) are on adventure in Nepal, and they have to find out what happened to their explorer-dude uncle. I got my first option during the plane ride to Nepal: Stick with the plane and its dwindling fuel supply, or bail out via parachute. I went for the sky-dive.

My second choice was whether or not to rely upon a shady guide called Jamling (voiced by Mark Hamill, cooool), and I went with "avoid Jamling." But then the jerk went and stole the kids' adventure journal! Rats! 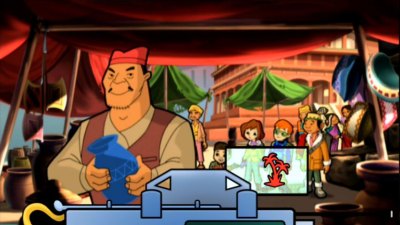 And I won't spoil any more of the options for you. One thing that did cross my mind is this: If your kid happens to dig the characters and the story (which, so far, aren't half-bad!), then s/he'll have a pretty good time re-watching the DVD a few times over, if only to discover what side-trips they missed the last time out. It's not exactly a quantum leap in DVD technology, but still it's a pretty cool gimmick. Just like the books.

But all the clever gimmicks and nifty branching options in the world won't amount to much if the movie itself is no good. Fortunately, there seems to be some real quality and actual production value poured into this experiment. The voice actors are solid across the board, the colorful animation is pleasant enough to look at, and the story is just engaging enough to keep the kids entertained. And by "kids," I also mean "grown-ups who like cartoons." Like me.

A little bit about the "choosing" interface: Whenever you get to choose between two plot threads, your options appear onscreen. You have about 30 seconds to make your pick (left or right on your remote) or the movie chooses a path for you. This is cool for kids who haven't exactly mastered the remote yet, and want to feel like they made a choice -- even if they actually missed the countdown. 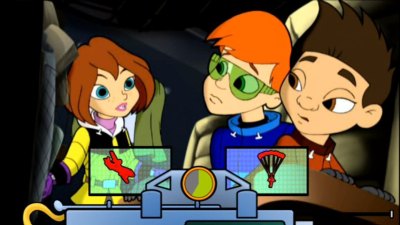 Video: The movie is presented in a rather eye-catching anamorphic widescreen (1.85:1) transfer. What inspired the producers to go for the "cinematic" animation style is a mystery, but I'm impressed by the extra effort. Picture quality is quite excellent.

Extras: There's a 28-minute educational documentary entitled In the Shadow of the Himalayas: How People Live in Nepal, which is a very solid inclusion for the kids. (Or adults who know next to nothing about Nepal.)

There's also a 10-minute behind-the-scenes piece in which cast & crew members discuss how the classic book series was spruced up for the DVD generation. (Although old-school fans will be happy to know that 18 of the original books are now being republished!) Interview subjects include director Bob Doucette, producers Jeff Norton, Mike Young, and Michelle Crames, writer Shawn Tanaka, and actors William H. Macy, Frankie Muniz, Lacey Chabert, and Phil LaMarr. (Yes, the guy who does Hermes on Futurama!)

Rounding out the extras is a music video for the kid-friendly Choose Your Own Adventure theme song. (Ah, there's also a handy little training session, just in case the kids need a primer on how to click left and right.) Inside the case you'll find a 12-page Adventure Journal that adds a nice little touch to the package. Like the movie, it's educational and informative without being starchy or boring. Good stuff.

I suppose the major difference between the Choose Your Own Adventure books and the new DVD version is that of perspective. Used to be, the adventures were told in the second-person. YOU were the adventurer searching through the haunted mortuary. With the new version, you're more of an active observer as you watch your heroic trio of new friends flit about while you (occasionally) get to tell them where to go. Would I love to see a "second-person" or live-action take on Choose Your Own Adventure? Absolutely, but this release is mainly for the kids, and it's a pretty impressive little movie, all things considered.

If your kid digs animated adventures and DVD clickers, then consider this surprisingly entertaining DVD Highly Recommended. Compared to the average direct-to-video Disney sequel, the first Choose Your Own Adventure DVD looks like even more of a winner. (And there are three more on the way!)