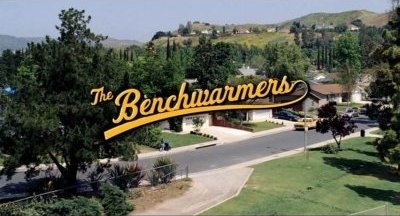 Deuce Bigalow, Joe Dirt, and Napoleon Dynamite all in one movie, plus Jon Lovitz too. If the mere thought of that already has you salivating with anticipation at the hilarity to come, then The Benchwarmers will probably give you everything you want from it. Namely: boogers, farts, puking, bug-eating, and people hit in the balls. Yes, it's all there, folks. Highbrow entertainment at its finest.

The plot, as if anyone cares, is a pretty straightforward Bad News Bears knockoff. The three lead losers spot a bunch of bully kids beating up some nerd kids on a baseball field and decide to teach those meanies a lesson. Said lesson involves the three adults forming their own Little League team and taking on all the local school-age challengers. David Spade plays the sarcastic jerk (a real stretch for him, I know) who's incompetent at baseball. Jon Heder plays the possibly retarded social outcast (you know, Napoleon Dynamite again) who's also incompetent at baseball. And Rob Schneider plays the really cool guy with a hot model wife (say what?!) who's so good at baseball that he can single-handedly win every game for them. Once they've proven their chops, billionaire nerd Jon Lovitz steps in to bankroll an official franchise team whereby nerdly kids from all over can play the sports they're always passed over for. PG-level raunchy escapades with a heart-warming message for the kiddies ensue.

The film is a Happy Madison (Adam Sandler's company) production, and has the expected 3rd Grade groaning dialogue and humor, with a heavy-handed message about respect and tolerance shoehorned in so as not to seem too morally bankrupt. It also has a rather uncomfortable homophobic streak, which tends to counter that. The movie is basically awful, but you probably already knew that by watching the trailers. Or you thought the trailers looked hilarious, in which case God help you. Listen, I don't want to sound like too much of a stick-in-the mud here. The first Deuce Bigalow is actually a guilty pleasure of mine, and I can appreciate lowbrow humor when done well. But this is just lazy, sloppy, unfunny hackwork from start to finish. 3rd Graders (boys specifically) will love it, but any self-respecting adults should hate themselves for letting their children watch it.

The Benchwarmers debuts on the Blu-ray format courtesy of Sony Pictures Home Entertainment. Why they thought a movie like this would be a good showcase for the format is anybody's guess.

The Benchwarmers Blu-ray disc is encoded in High Definition 1080p format using MPEG2 compression on a single-layer 25 gb disc. The movie is presented in its theatrical aspect ratio of approximately 1.85:1 with tiny letterbox bars at the top and bottom of the 16:9 frame. I'm surprised they didn't just open the mattes to fill the screen. Does someone associated with this project have an ounce of artistic integrity?

The movie's photography is bright, sharp, and colorful. The Blu-ray delivers it fine for the most part. The picture has good colors and maintains a reasonable High Definition appearance throughout. The image looks a little filtered in the fine details, a problem common to most early Blu-rays, and exhibits some mild compression noise at various points. The disc isn't likely to bowl anyone over, but it's just The Benchwarmers so who was expecting it to?

The Benchwarmers Blu-ray disc is not flagged with an Image Constraint Token and will play in full High Definition quality over a Blu-ray player's analog Component Video outputs.

The movie's soundtrack is provided in uncompressed PCM 5.1 format or in standard Dolby Digital 5.1. This is a typical comedy sound mix, with the vast majority of the audio anchored in the front speakers. The surround channels really only come into play when Schneider hits a home run and the clink of his aluminum bat reverberates to the back of the room. Dialogue is clear and understandable. Fidelity is as good as it needs to be. The Dolby Digital and PCM tracks sound identical to my ears. That PCM is really just needlessly wasting a lot of disc space.

All of the bonus features on this Blu-ray title are recycled from the DVD edition and are presented in Standard Definition video with MPEG2 compression. All of the supplements from the DVD have carried over. That might be impressive if they weren't all such brief, worthless fluff.

That's it for features directly related to the movie, though the disc does also offer two HD previews for unrelated movies.

Also hidden on the disc is a selection of HD test patterns. You can access these by entering 7669 on your remote control from the disc's main menu. Use the Skip button to page through the patterns. Please note that due to an error in the Sony encoder used to author the disc, blacker-than-black and whiter-than-white portions of the video signal have been clipped, essentially rendering the Brightness and Contrast calibration patterns useless.

You already know whether this is your type of movie or not without me telling you my opinion. If it sounds like something you'll really want to own, I'm sure the Blu-ray edition has better picture quality than the standard DVD, but everything else is about even. Personally, I can't imagine actually recommending this movie to anyone in either format.