Other (International) // Unrated // May 9, 2006 // Region 2
List Price: $25.99 [Buy now and save at Xploitedcinema]
Review by Svet Atanasov | posted August 7, 2006 | E-mail the Author
The Film:
You can turn your back on a person, but never turn your back on a drug, especially when it is waving a razor-sharp hunting knife in your eye.
Hunter S. Thompson

When American opera diva Caterina Silveri (Jill Clayburgh) moves to Italy hoping to begin a new life she is faced with an unusual challenge: her son Joe (Matthew Barry) reveals a passionate heroine addiction. Frustrated and unable to push Joe away from the drugs Caterina is soon thrown into a controversial vortex of affairs, some incestuous, where nothing seems to be going right.

Completed by Bernardo Bertolucci in the summer of 1979 La Luna is rather difficult to place next to the director's classic Last Tango in Paris (1972), 1900 (1976), or his visually stunning The Sheltering Sky (1990). Yet, there is plenty in La Luna that singles out what made the Italian director a legend: impressive camera work, sensual characters, an unusually candid approach to difficult subjects other directors tend to intentionally shower with overused clichés.

In La Luna the key subject is drug abuse with all of its destructive variances. The Oedipal relationship between a mother who never seems to have enough time for her son, and a son who always seems to have more than enough time to hurt himself, is meticulously investigated by the Italian maestro offering different angles at what can most accurately be described as a human tragedy. From the moment we encounter Joe and his mother it quickly becomes obvious that trouble will be right behind them. 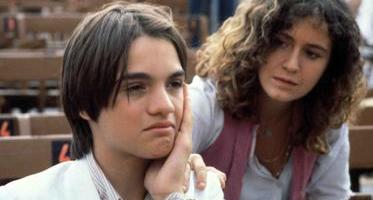 Unlike contemporary Hollywood films about teenagers on the destructive path of substance abuse however where excess, irrational behavior, and ultimately tragedy are often approached with MTV-esque flashiness resulting in flawed characters La Luna, with a few minor exceptions, manages to capture the desperation raging in the Silveri family quite well.

Still, it was rather strange to witness once more the tragedy in La Luna after all these years. In fact, when I played this restored version of Bernardo Bertolucci's film a few weeks ago I was shocked to discover how dated the story looked. What is even more intriguing here is that I caught myself drawing parallels between La Luna and Scott Kalvert's adaptation of Jim Carroll's autobiographical novel Basketball Diaries (1995) where young Lionardo DiCaprio was also fighting a drug addiction. While the two films are clearly different there was something very eerie about their main protagonists-they both looked so innocent yet so old under the effect of heroine.

It is hard to deny however that La Luna successfully manages to recreate the sprit of an era when Freedom was often confused with excess. The unstable world which the Silveri family live in is shattered by so much controversy that by the time the end credits rolled I was quite unsure how to feel about them-pity because of their weakness or pleased that they suffered the consequences of their actions. No matter how you end up seeing the moral struggles of the Silveri family La Luna does what it sets out to accomplish-make its audiences feel.

In 1980 the film was nominated for Best Motion Picture (Drama) Actress (Jill Clayburgh) at the Golden Globe Awards. During the same year the film won the prestigious Silver Ribbon Award for Best Supporting Actor (Tomas Milian) granted by the Italian National Syndicate of Film Journalists.

It appears that all over Europe La Luna was simultaneously released with a new and restored print which originated in Italy (with the exception of the Danish disc all other releases, German, Italian, etc. are using the same master). Presented in its original aspect ratio of 1.85:1 and enhanced for widescreen TV's Bertolucci's film looks exceptionally well-excellent degree of contrast, no damage marks/dots to report, great color scheme, exceptionally tight progressive PAL transfer. Furthermore, when blown out through a digital projector the image remains remarkably strong without losing any sharpness. The print herein reviewed also boasts a healthy dose of film grain which provides this DVD with a very film-like look. All in all there is nothing to blame German distribs ARTHAUS for-this is a strong and perfectly put-together package. Region 2, PAL-encoded.

La Luna is presented with its original DD English track as well as a curious but needless as far as English speakers are concerned German DD dub. This being said the English track is exceptionally strong with no issues that I need to report here. With optional German subtitles (only).

Even though there is an abundance of extras here (an interview with Bertolucci, music notes, etc, they are all in German, text-format only). Aside from that the disc comes with a lovely booklet highlighting other releases from the German distrib's catalog.

Similar to Bernardo Bertolucci's classic epic 1900 which was released all over the world from Europe to Australia (but America) La Luna is now available in a splendid package complimented by a very affordable price tag. A North American release is not considered at this point and given the spectacular picture quality this German disc boasts I can not but HIGHLY RECOMMEND it.