As Far As My Feet Will Carry Me

The once powerful Sixth Army, Hitler's pride and joy, has been unceremoniously defeated by the Red Army. Thousands of German soldiers are scattered amongst the frozen lands of Russia. Some will soon die of hunger while other will last a bit longer before they rot alive in the deadly GULAGs. At Camp Dezhnev, the eastern-most point of Russia, Clemens Forell will begin a three-year journey through the heart of Siberia, at the end of which there is freedom.

Based on the true story of a Nazi soldier who did the impossible and walked nearly 14 000 (fourteen thousand) kilometers before reaching Tabris, Iran from where he was flown back to Munich So weit die Füße tragen a.k.a As Far As My Feet Will Carry Me (2001) is a film that boggles the mind. Certainly having the strength to endure three years of the never-ending Siberian tundra, hunger, and pain seems impossible. Yet, day after day one man would look at the picture of his family, talk to himself, and pray that God gives him one more chance to celebrate Christmas. He would nearly go insane. 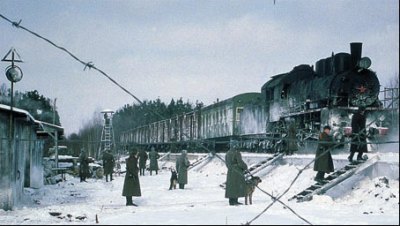 Unceremoniously denied US entry As Far As My Feet Will Carry Me is one of the very few films that I have seen attempting to shed light on the miserable fate of thousands and thousands of German POWs that were abandoned in the Far East after Hitler's capitulation. Scattered at the newly erected by the Soviets labor camps where the Stalinist regime rarely kept proper files many died unable to endure the harsh weather conditions. Others-reactionaries, gypsies, and POWs from the countries that supported the Hitler regime-were quickly exterminated without a verdict. The few who attempted to escape were consumed by the deadly ice fields of Siberia.

Based on the book by Joseph Martin Bauer who in the early 1950s did numerous interviews with Clemens Forell before finally publishing his recollections As Far As My Feet Will Carry Me will likely force many to scratch their heads in disbelief. There is too much in this tale about survival that would better fit a ludicrous Hollywood script than the true story of a man unwilling to give up. When I first read the memoirs of Clemens Forell in the summer of 1982 I thought that people will never believe what they revealed. I was wrong!! Joseph Martin Bauer's book became one of the biggest German bestsellers ever. 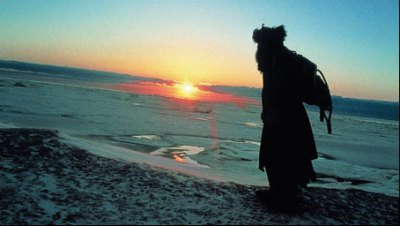 Hardi Martins' motion picture is the second attempt to film the odyssey of Clemens Forell. In 1959 the lesser known TV mini-series were released with the notable participation of Heinz Weiss as Clemens Forell. The new, 158 minutes feature-length production, however, is certainly a much more ambitious project that truly does justice to this unusual story.

Lastly, it is quite unfortunate that in the United States As Far As My Feet Will Carry Me was dealt with in such an insulting manner. The idea of a Nazi soldier seeking and earning his freedom obviously did not bode well with a well known major studio known for its restrictive policy. Certainly the "message" the film carries was something that troubled a few of the decision-making minds in Hollywood. As a result even though in 2001 Hardi Martins' saga became an instant international hit aside from a few selected festival screenings its presence in America is still unwanted. 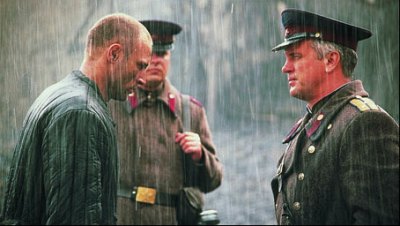 Even though the film was shot in an aspect ratio of 2.35:1 its German and international DVD releases have all been in an aspect ratio of 1.78:1. As I understand this new framing is indeed approved by the German producers. As I did not see this film in the theaters however I can not comment how successful the actual composition is. This being said this Region 3 release does indeed offer the film in an aspect ratio of 1.78:1 enhanced for widescreen TV's. In fact, I have my suspicions that the print was directly sourced from the German DVD. In terms of technical presentation the only thing that bothers me here is that the R3 disc is not progressively mastered, hence, there is some mild "combing". Aside from that however everything else here is of very good to excellent quality: colors are lush and steady, contrast is great, and there is no print damage that I could spot. Occasionally there is some mild edge-enhancement especially during the Siberian scenes but nothing that will truly detract from your viewing experience. As mentioned above the biggest issue remains the fact that this is an interlaced, non-progressive transfer.

In one word: fabulous! What we have here is an active German DTS track that does this film justice, period! The rear channels are used quite intelligently and the quality of sound found on this disc is fabulous. I did not hear any disturbing pop-ups or other annoying hissing(s), etc. With optional white English and Chinese subtitles (I did notice a few minor spelling and syntax issues but they were well into what I would describe as "manageable"). Region-3 encoded, NTSC.

Unfortunately the only piece of extra on this disc is the theatrical trailer for the German release.

A few years back I reviewed this film for another site and once again I must express my disappointment that a US release is nowhere to be seen on the horizon. So, I shall highly recommend this international disc (which remains the only way for the more adventurous amongst you to see the German film) despite of its sourcing issue as I do believe that As Far As My Feet Will Carry Me is one of the most unbelievable true stories ever told.