I've been a huge fan of Cartoon Network's Adult Swim block since the pre-Swim days of Space Ghost Coast To Coast and Cartoon Planet. Sealab 2021 was one of the first shows to put Adult Swim on the map and also one of its finest. Not only that, but to this day, Sealab 2021 remains my favorite show to air on Adult Swim. With that being said, it saddens me to be reviewing the final chapters of Sealab 2021 on DVD. 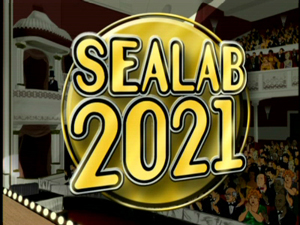 Sealab 2021 Vol. 4 compiles 5 episodes from Season 4 and the entire run of 9 episodes from Season 5. Of course gone is the much loved and missed enigmatic nut, Captain Murphy (R.I.P. Harry Goz). His replacement, Captain Bellerophon "Tornado" Shanks (voiced by Harry Goz's son, Michael) is a former football coach and one charming Redneck. This caused quite a stir back in the end of Season 3 and many fans didn't respond well to the new captain. I was also skeptical at first, but after a rocky start I started to enjoy Captain Shanks and what he brought to the show. In my opinion, the Sealab 2021 creators did a great job salvaging the show from such an unfortunate predicament. Unfortunately, a large majority of the Sealab 2021 fans didn't see it that way and after 20 episodes under the command of Captain Shanks, Sealab 2021 was cancelled. Or so many people thought. Turns out that apparently 70/30 productions decided to end the show so they could concentrate on other projects (one being Frisky Dingo).

There are still plenty of laughs in Sealab 2021 Vol. 4. A lot of people have complained that the overall quality of the show has gone down in its last few seasons. While I don't totally agree with that line of thought, Sealab 2021 still has plenty to offer during its final run. After all, how could you go wrong with underwater knife fights, poisonous snakes, looming aquatic race wars, troglodytes, carbonite freezing, dead hookers, scuba ninjas, severed limbs, a cancer ridden whale voiced by Chuck D, green zombies, lunch on the moon, fighting nuns, cannibalism, chupacabras, Time Pie pie charts, coconut bikini's, magic beans, baby eating trees, Respek knuckles, Hawaiian shave ice, Holodecks, Malcom X-caliber, chainsaw juggling tigers, mutant crustaceans and urinating in the river of your ancestors. The standout episodes on this DVD are "Isla De La Chupacabra", "Return of Marco", "Moby Sick", "Green Fever" and "Legacy of Laughter". 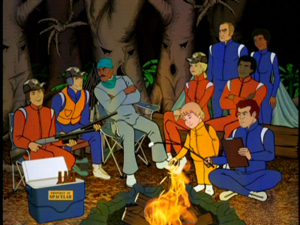 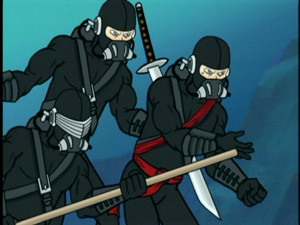 What keeps Sealab 2021 going strong during its final run is its strong central characters and the voice talent behind them. Doctor Quinn, Stormy, Debbie, Sparks and Marco really ground the show while secondary characters Hesh, Sharko, Dolphin Boy and Doctor Virjay help keep things fresh. Captian Shanks plays a somewhat reduced role, especially in the last season. I have a feeling this was due to a lot of the negative feedback from a lot of viewers. Most notably "Tornado" Shanks also drops his Southern accent in episode 46 because "people kept thinking I was gay". Also glaringly absent from almost every episode in Vol. 4 is Debbie Love a.k.a. "Black" Debbie. Not to be overlooked is the stellar cast of voice actors behind the animation. Kate Miller, Michael Goz, Mc Chris, Ellis Henican, Bill Lobley, Erik Estrada, Brett Butler, Angela Gibbs, Matt Thompson Adam Reed do amazing jobs brining their characters to life. This show's success is largely do to the talent they bring forth from behind a microphone. 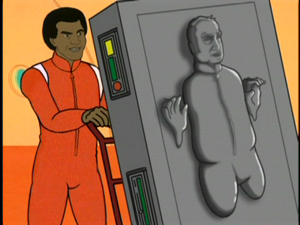 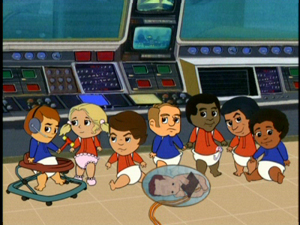 Summaries of the episodes from Sealab 2021 Vol. 4 (stolen from Adultswim.com except for episodes 51-52, because apparently they're just a bunch of slackers on Williams Street. Sick burn): 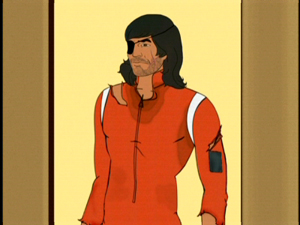 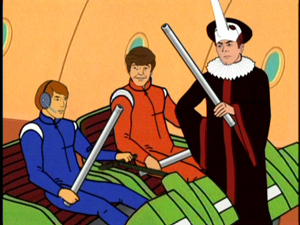 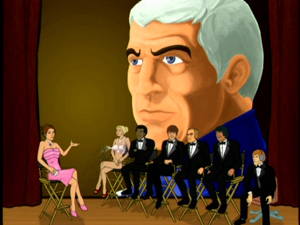 Sealab 2021 had a great run of 52 episodes, survived losing its lead character and helped make Cartoon Network's Adult Swim the phenomenon it is today. This is a must buy for Sealab 2021 fans, despite the unpleasant change of packaging and lack of extras. For the Adult Swim fans that stopped watching Sealab 2021 after Captin Murphy departed, I recommend giving the show a second chance and checking out this DVD. While there are a few stinkers on this set, some of my favorite episodes of the series are included on this release. Sealab 2021 is, and will always be missed. At least now the entire series is available on DVD for your viewing pleasure. Recommended.