Gritty, explicit, yet genuinely hilarious Adam & Paul (2004) tells the story of two Irish junkies who struggle to make ends meet on the cold streets of Dublin. As the lads desperately attempt to earn enough money for a bag of the much needed white powder something terrible will happen.

Hailed by the fans and critics as the Irish answer to the now cult Trainspotting (1996) this much talked about in Europe dark comedy is as funny as it is painful to watch. The film reveals a state where instead of jobs and prosperity the locals face drugs and misery. Indeed between the bleak worlds of Leonard Abrahamson's Adam & Paul and Danny Boyle's Trainspotting there are plenty of similarities. 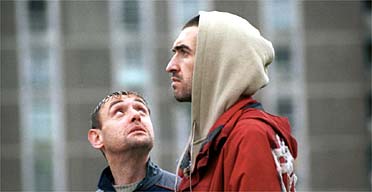 The bigger part of this recent Irish production takes place on the backstreets of Dublin where an array of colorful characters live in wicked harmony. Thieves, robbers, drug-dealers, junkies, and ordinary losers are entangled in a web of misery where each new day is just as boring as the night before. There isn't much to do here and as a result the community Leonard Abrahamson takes on with his camera often falls in a deep narcotic sleep.

The strongest aspect of this Irish film is without a doubt its marvelous script. Cold and depressive Adam & Paul manages to do well where other films about drug addicts (Gridlock'd) typically fail-character believability. The two main protagonists Adam (Mark O'Halloran) and Paul (Tom Murphy) look so miserable that by the time the end credits roll you feel angered by the fact that human beings can slip and fall this low.

Unlike the much admired Trainspotting where a lot of the drama was sugarcoated with catchy beats and chic camera work in Adam & Paul the ugliness of drug abuse is left untouched. As far as I am concerned the film walks the fine line between being revealing and entertaining flawlessly. As a result the humor Leonard Abrahamson has snuck in does not undermine its agenda on the contrary it compliments it quite well.

I don't know if there is much left to film when it comes to drug addiction that hasn't been done yet in mainstream cinema. Substance abuse and the irrational behavior of those who suffer from it have been successfully and mostly unsuccessfully exploited by countless hordes of film directors. Some like to use the allure of drugs as they often side with other subjects that sell well on the film market: crime, sex, etc. Others like to take their chances and substitute commercial glamour with authenticity risking to be criticized for "lack of vision". Adam & Paul may not be the most original of all films recreating the horrific effects of drug abuse but it sure is one of the better structured and sugar-free stories I have seen that tells it as it is.

Presented in its original aspect ratio of 1.85:1 and enhanced for widescreen TV's the film looks very good. Colors are strong and vivid, contrast is well-handled, and edge-enhancement is minimal (the only issue I noticed was within the first half-hour of the film when the two characters were on the beach). The quality of the actual print is also very good excluding two/three specs that I noticed in the opening scenes. Digital artifacts are of no concern here and generally speaking there should be no problems with viewing this DVD on a high-end set-up. This being said I would like to point out that a few of the night scenes are intentionally shot with a higher than usual grain-presence and you should not be discouraged by it (the DVD print does have the desired by the director rough look). To sum it all up: a very good presentation that suits the film perfectly. Region 2, PAL-encoded.

The DVD arrives with a standard English (well, I guess I must note the Irish accents here) 2.0 track which is clear and very easy to follow. The Irish talk is heavy but manageable and you shouldn't have any trouble following the lads. With this said I did not notice anything else of concern-good solid audio presentation. The DVD comes with optional Dutch and French subtitles.

The only extra here is the original theatrical trailer for the film.

Plenty of laughs and awkward behavior in this Irish gem should appeal to those who liked the offbeat Trainspotting and Intermission. The film is yet to be introduced to US audiences which frankly is quite surprising to me given the massive buzz it created at film festivals around the old continent. RECOMMENDED.