A young woman accidentally discovers that her husband has an affair. With no other than her own sister. She is upset, saddened, and hurt. Yet, she is going to wait, hope, and pray that it will eventually all go away. And then she will wait even longer as instead of forgetting her husband would not stop remembering.

Is this what the young woman must do? Yes? No?

A superbly-directed film by the man who brought us the beautiful Une Liaison Pornographique a.k.a A Pornographic Affair (released in the US under the less revealing title An Affair of Love) (1999) Frederic Fonteyne's La Femme de Gilles a.k.a Gilles' Wife (2004) is a small marvel. With hardly any dialog to spare the film follows the soul-searching of a simple woman determined to endure the maddening affair between her husband and sister.

Based on the novel by Madeleine Bourdouxhe Gilles' Wife is above all an impressive exploration of human emotions captured on film by a man with a unique vision. The main protagonists Elisa (Emmanuelle Devos) and Gilles (Clovis Cornilac) provide an interesting angle to an affair which appears to be riddled with clichéd scenarios. Yet, it isn't. As the story progresses it becomes more and more evident that neither is Elisa's behavior predictable nor are her intentions. They simply follow an unexpected rationale. 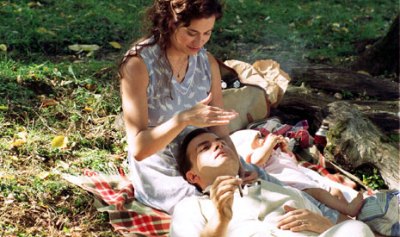 I do not understand Elisa's actions and I hardly understand Giles' misdeeds. The happy couple we see in the opening scenes of Gilles' Wife is thrown in a mix of highly "possible" scenarios (what unfolds in this film is not too far off what modern couples often go through) where guilt is somewhat of a forgotten term. Yet there is plenty of forgiveness. Which makes this mostly dialog-free film a fascinating piece of cinema.

What truly impresses in Frederic Fonteyne's film adaptation of Madeleine Bourdouxhe's novel however involves the stunning performance by Emmanuelle Devos. Here's an actress who hardly even speaks in this film yet she tells the audiences so much her silence for the most part remains unnoticed. In fact, the range of emotions we see on her face is deafening: from anger to joy to unbearable pain Emmanuelle Devos' face is like a large canvas where rich colors overflow.

I can hardly recall another recent film where a single performance overshadowed the rest of the supporting cast in such a resounding fashion. I could have watched Emmanuelle Devos for hours even if she would have only sat on the kitchen table in that 18th century house where most of Gilles' Wife takes place reconsidering her options. This is truly an amazing achievement that should and must be seen by those who value intelligently-made cinema. Bravo!

In 2004 Giles' Wife won the C.I.C.A.E Award at the Venice International Film Festival (Frederic Fontayne). In 2005 the film won the Golden Tulip Award for Best Director at the Istanbul International Film Festival in Turkey. During the same year the film also won the prestigious Golden Plateau Award for Best Belgian Director and Best Belgian Screenplay during the Joseph Plateau Awards (an industry event held in Ghent, Belgium).

Presented in an aspect ratio of 1.78:1 (the film's original aspect ratio is 1.85:1) and enhanced for widescreen TV's the image quality of this R1 release is generally quite good. Colors are strong, contrast is well-handled, and edge-enhancement for the most part is manageable. There is some marginal softness during the night scenes where grain pops-up but most of it may well be what the director intended his film to look like (I could not disprove or confirm this claim as I do not own the French/Dutch dvd to compare with). This being said I am certain that Koch Lorber have copied the film from a PAL-master which although tweaked to account for the speed discrepancy does not appear to be progressively sourced. There are occasional examples of minor "combing" which will be noticeable only if you watch the DVD on a more sensitive home equipment. Those with standard tubes will witness a strong transfer with no issues of concern whatsoever.

The only audio option here is a French DD 2.0 track which is more than enough given the film's lack of elaborate soundtrack (for comparison both the double "Special Edition" available in Holland/Benelux and the French discs offer 5.1 tracks). I could not detect any disturbing occurrences here-the little dialog the main protagonists exchange is easy to follow and masterfully mixed. Unfortunately the film comes with rather large and yellow optional English subtitles.

Aside from the original theatrical trailer what you will find here is a few short deleted scenes with a commentary from the director where he explains why these were omitted. I don't see much substance in these scenes that brings additional clarity to the story (as such is not needed) and for the most part feel that the editors of Giles' Wife did the correct thing by leaving these scenes on the cutting floor.

If you thought that Emmanuelle Devos was superb next to Vincent Cassel in the highly popular Sur Mes Levres a.k.a Read My Lips (2001) then you should take a look at her acting in this multi-national production. What an exceptional performance! The DVD presentation by Koch Lorber is once again gravitating around the "average" to "slightly above average" mark which really is getting annoying as the company clearly has a taste for great cinema and seems to be putting a lot of effort in bringing quality films to the US. I like Koch Lorber's roster yet I often feel cheated as they seem to favor the new trend of putting together cheap PAL-ports (non-progressive and with a few exceptions not converted properly) as well as cropping their films to the now fancy 1.78:1 ratio. If these issues are taken care of I think that the company will be well on its way to be one of the serious foreign-cinema distributors in the US.